When he moved to Beijing as a migrant worker in the 1990s and became part of the gay subculture scene, artist Xiyadie assumed the pseudonym by which he is now known and which means Siberian Butterfly. Although Xiyadie has been working in the traditional medium of Chinese paper-cutting since his youth, for him, making paper-cuts during this period became a way to relieve himself of the pressures of conventional society, which he describes as being so strong it was hard to breathe. Cutting through paper, he released his personal, secret life story into the artistic spaces he opened up for himself. Dense images intricately woven into the delicate sheets—unfurling plant and animal life entangled with human figures and architectural structures in scenes of queer eroticism—allowed a measure of control over the unfolding of his own narrative and a mode of ecstatic self-expression.

In these cutout surfaces, Xiyadie builds another world, one that is bittersweet. Their sheer thinness and translucency produce an unbounded space—a world that can be stepped into and offer a screen for projecting fantasies, both personal and collective. A selection of these works currently comprises the exhibition ‘Cut Sleeve, Split Peach,’ curated by Hera Chan, at NOME, where BAL met with the artist to speak about his practice. 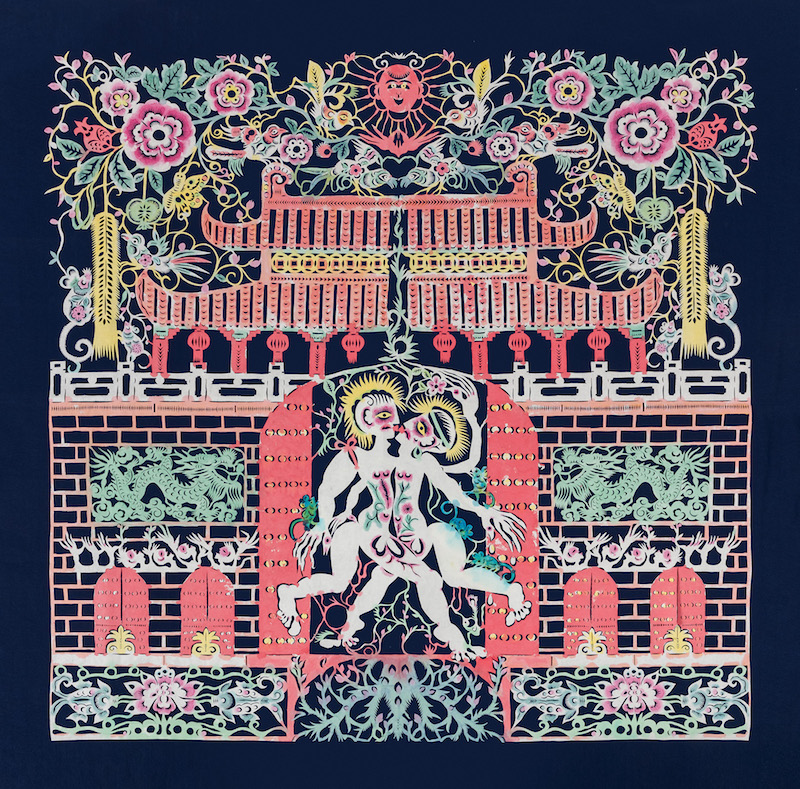 Julianne Cordray: Let’s begin by talking about how and when you began paper-cutting.

Xiyadie: I started when I was around 16. My mother made paper-cuts and other handcrafts, such as drawings on traditional Chinese bread, which is a plain white bread often used for weddings and other celebrations. The paper-cuts had the same style as these celebratory drawings on bread, so I learned from my mother and in the beginning, I worked in this very traditional style. My mother said I had a feminine quality because I liked making paper-cuts, which was mostly done by women. But I was particularly good at making them and all of the adults would praise me for it. Because of that, I liked making them even more.

Early on, I made paper-cuts for celebrations such as the Chinese New Year, marriages, childbirths and the full moon. I also started to make them about my family—for birthdays or when someone passed away. Then, when I was in my early 20s, as I grew and changed and my sexuality developed, my paper-cuts changed with me; they became the works that you see now. 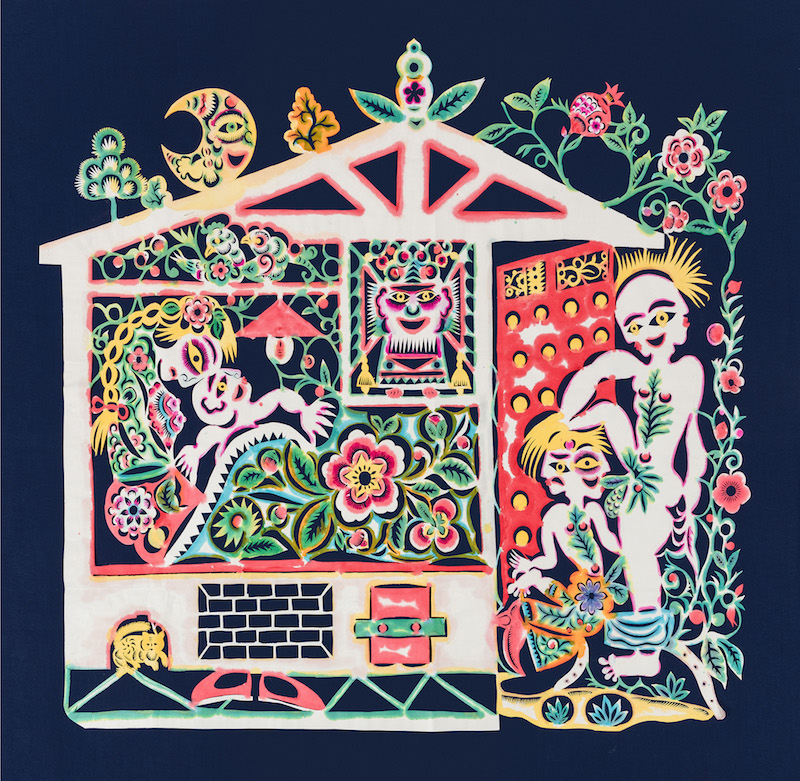 Xiyadie: Gate 门, 1992, paper-cut with water-based dye and Chinese pigments on Xuan paper, 140x140cm // Courtesy of NOME and the artist

JC: So it was during this period that they took on the style and subject matter seen in the works at NOME. Can you talk a bit about these works and how they developed?

X: Originally, the work was not made for exhibition or sale; I made it for myself. I developed these paper-cuts over a period of 20 years, as I was experiencing the pressures of traditional society. At that time, I was in a lot of pain, so I retreated to my fantasies. I had hoped that I would meet a handsome man and would be able to experience being with him. That thought brought me joy, but also pain because I knew I couldn’t be with that person. So I practiced self-love—I brought my pain and joy out in my paper-cuts. I fantasized about eloping with a man to the moon, where there was no one to discriminate against us, and that there were flowers and the birds kept singing their beautiful song. In imagining the beauty of our life there, I entered another world. My paper-cuts focus on this desire for love and freedom. I made them in my home, in secret, and didn’t want to show them to anybody, because I could be punished for them. 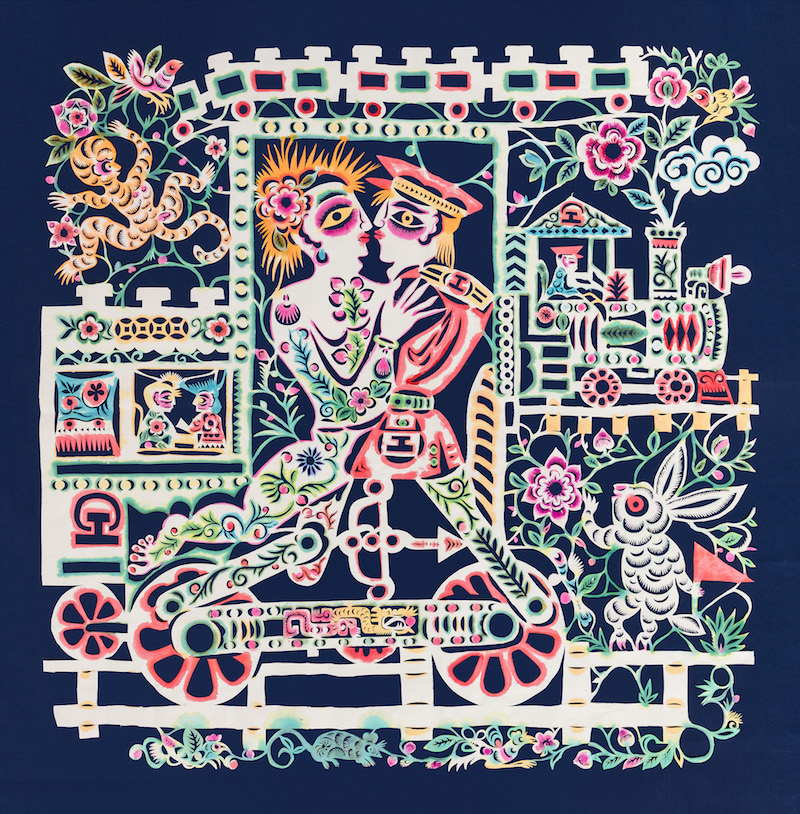 JC: So how did you eventually start showing them?

X: My works only came out when I went to Beijing and became part of the LGBTQ community. My first exhibition was at the LGBTQ Center and was organized by Yang Zi, who is now a curator at the Ullens Center for Contemporary Art. When Yang Zi saw my work, he said that it was very honest and brave, and that I should share it with the world. He said it was the first time he’d seen a queer artist whose work is alive. He suggested that I put pictures of this work on what was then the largest queer web forum in China. I was afraid but Yang Zi said he would protect me and everyone else in our circle—that we would protect each other. I didn’t want to do it, but he reached me on an emotional level and, with a bit of resistance, I ultimately agreed. Later that afternoon, when the work was on the website, Yang Zi called and said there were already so many comments. When they hung up a few of my small works in the LGBTQ Center—I kept the big ones stored under my bed—some foreign visitors saw the works and contacted me. That’s how I received invitations to go abroad and do exhibitions in the United States, Switzerland, Belgium and now Germany. Without the LGBTQ Center in Beijing, you and I wouldn’t have met. 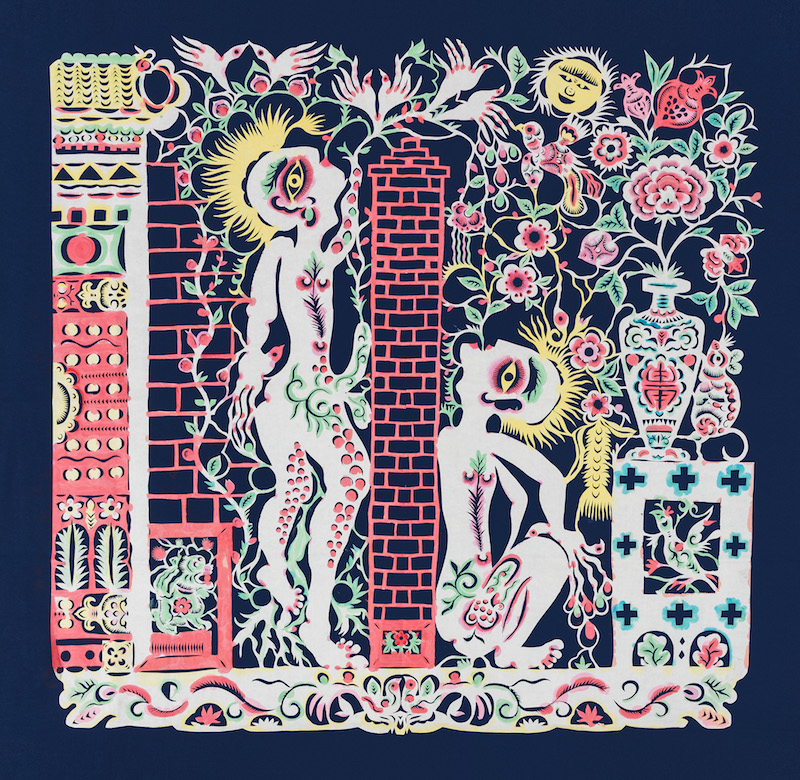 Xiyadie: Wall 墙, 2016, paper-cut with water-based dye and Chinese pigments on Xuan paper, 140x140cm // Courtesy of NOME and the artist

JC: Since your work was so personal and had been kept secret for so long, how did you feel once it was public and shared with others? Did you have any specific hope or expectation in mind for how people would receive it or be affected by it?

X: For me, making the work is the same as a cup of coffee: sour, sweet, bitter or spicy, it’s up to you to experience the taste and decide what it is. But I did hope that the work would bring joy. It’s a bit like saying one’s prayers: it gives a sense of peace and harmony so that we can find it within ourselves as well.

JC: The scenes are very intricate and there’s a lot of imagery. What are some of the symbols that you put into these scenes and what do they express?

X: Symbols are my idea of punctuation and grammar. If we look at Sewn (1999), for example, there’s a traditional red door and it represents pressure, or a way of closing you in. When the door is closed, you have a sense of safety, but if you lock it, then you’re trapped inside. It’s like being shut inside the closet. And when the door opens, you’re free. In Chinese culture the tiger represents strength and power, so it’s on doors to scare away spirits, but I use it to represent the extreme pressure of traditional society, which is as strong as a tiger. Then the sword under me represents the extreme pain that I felt at the time that I was making this paper-cut. In the bottom right corner, there’s fire, because my heart was in so much pain it felt like it was on fire. The thread in the needle is sewing parts of the fire, but I also hoped I could use it to break tradition, which is why it breaks through the top of the image. And flowers grow from my body, because I hoped for harmony. This is my language. I use traditional motifs as my punctuation, to represent and express my desire and what’s in my heart. 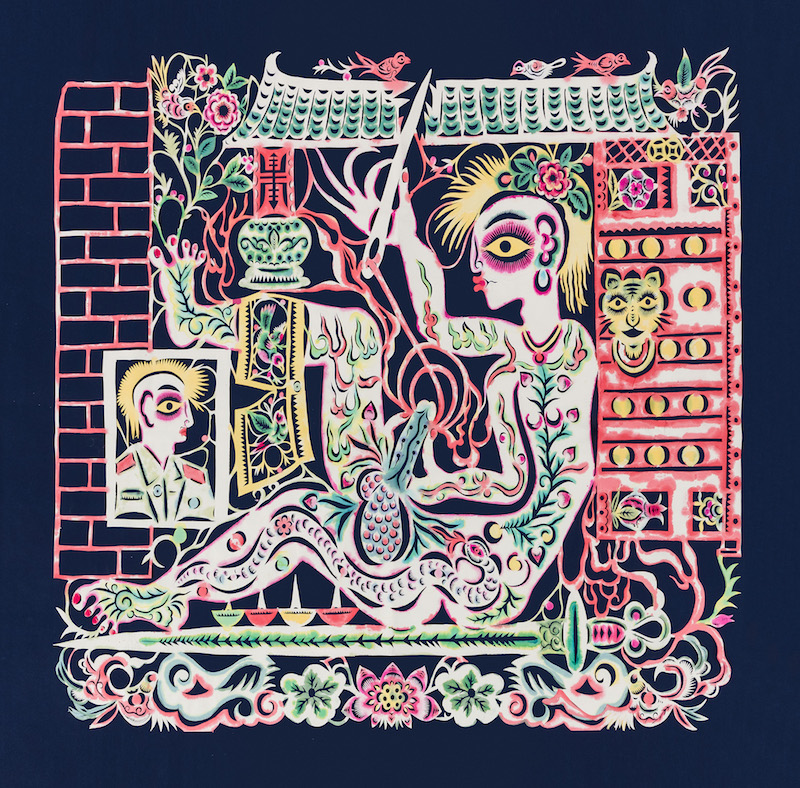 Xiyadie: Sewn 缝, 1999, paper-cut with water-based dye and Chinese pigments on Xuan paper, 140x140cm // Courtesy of NOME and the artist

JC: The color palette is a lot of vibrant reds, pinks and yellows, and the paper is so thin that the ink seeps completely through both sides. Can you describe the materials you use and your process?

X: I use traditional Chinese pigments, which are also used in the paintings on bread—though you shouldn’t eat them. With the bread paintings, you have a giant loaf of white bread, which is decorated with little birds and flowers that are colored and stuck on. In my family, to try to get rid of the pigment before eating, we would soak the bread in water for about an hour, wring it dry and then steam it with some vegetables. When it was finished, it was almost like rice. So these pigments are very common and could be bought in the village.

The paper is a form of traditional rice paper, Xuan paper, which feels a bit like cloth. It’s very absorbent and easy to flatten, but because it’s so thin, you have to cut several papers at the same time, so they are done in editions. I ink them all at once, from the top, but sometimes it’s not as vibrant at the bottom, so I have to remove the layers and add more color, which can take a lot of time. The large ones take about a month or more just to cut. Though I cut all of the works free form, I often make a composition first as a small paper-cut and use it as a model for making a larger one. 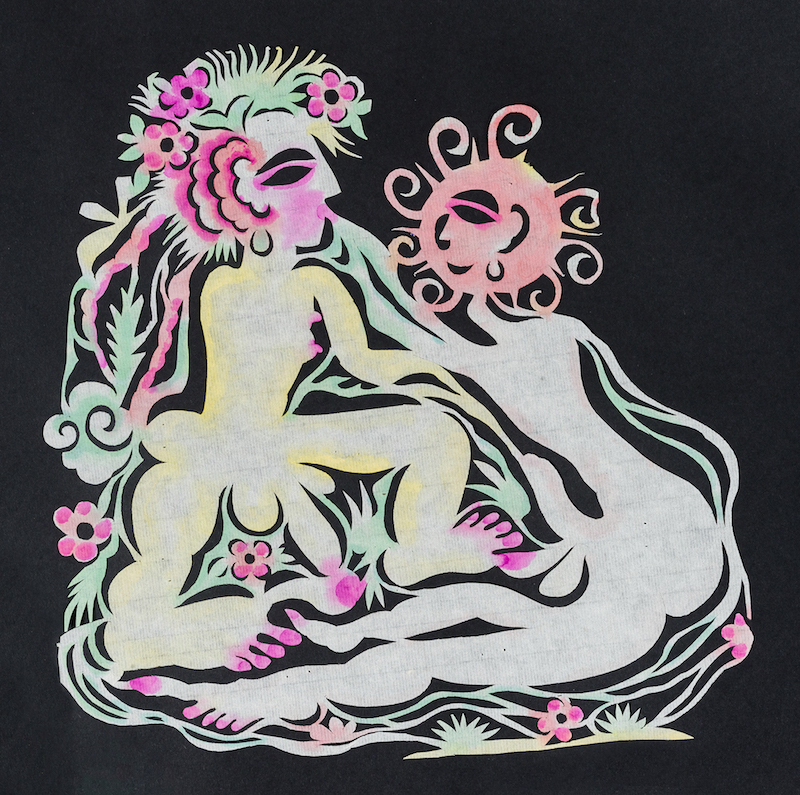 Xiyadie: Heaven and Earth 天地, 2000, paper-cut with water-based dye and Chinese pigments on Xuan paper, 27x27cm // Courtesy of NOME and the artist

JC: What’s coming up next for you?

X: I’ve been invited to participate in the Gwangju Biennale, which opens in September. Next year, in June, I have an exhibition at a university in the U.S. Then, late next year, I have an exhibition in Thailand. But in general, I don’t have plans for the work that I make. For me, everything is very immediate, in the now. When I have a feeling, I make a paper-cut.