Described as an “off-shore laboratory for collective, experimental learning,” the Floating University—inaugurated this spring in a rainwater basin near Berlin’s Tempelhofer Feld—was designed and built by local architects raumlaborberlin. The project is typical of raumlabor’s unique modular design aesthetic, with which they create frameworks from scaffolding that act as living and adaptable structures, inhabitable by many users and programs. In this case, the building is modeled after an oil rig, but the precious object of extraction is much loftier, the scarce urban resource in question being “sensitivity for decision-making.” While this may seem broad, it follows closely from raumlabor’s other projects in public space, which have often dealt with notions of grassroots participation and commons in relation to city planning. The Floating University is a site to consider our place, as architects, artists and inhabitants, in the urban environment. On this occasion, raumlabor was offered an unparalleled building site that proved ripe for new and exciting possibilities (as well as organisms). 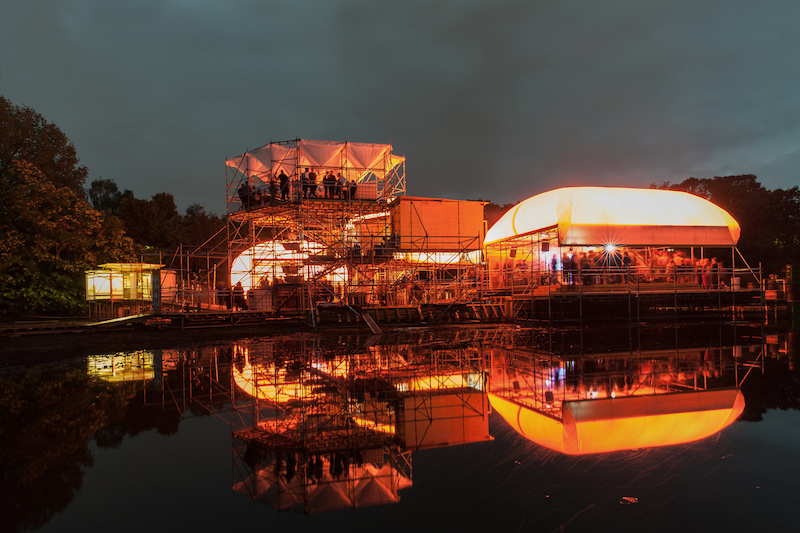 The old, concrete rainwater basin on Lilienthalstraße, close to two of Berlin’s biggest public parks, is a manmade swamp of sorts, sometimes knee-deep and covered over with sickly green algae, and at others bone dry and dusty, depending on precipitation level. After a particularly heavy rainfall in July, the Floating University was even flooded and temporarily inaccessible. While the scene of these skeletal buildings with bubble accents rising out of the water is impressive, like a spaceship landing, the decision to use the basin is not purely aesthetic; raumlabor has invited artist-in-residence Katherine Ball from Detroit as the on-site expert on water filtration, and her extensive research alongside participants can be viewed as a kind of ongoing, fully-functional installation in the space.

The Floating University is a self-contained organism, with its many parts helping to uphold the viability of the whole and to reduce excess waste. The toilets, for example, flanking off to one side of the well-used activity spaces, are compost-based. All of the spaces and actions produced at Floating University are the result of an academic program that engages students from art and architecture faculties across Berlin and Europe. The kitchen is designed and operated by students of the Space Production studio at the Universität der Künste, for example, while students from Weißensee Kunsthochschule took over the initiation of the bar. 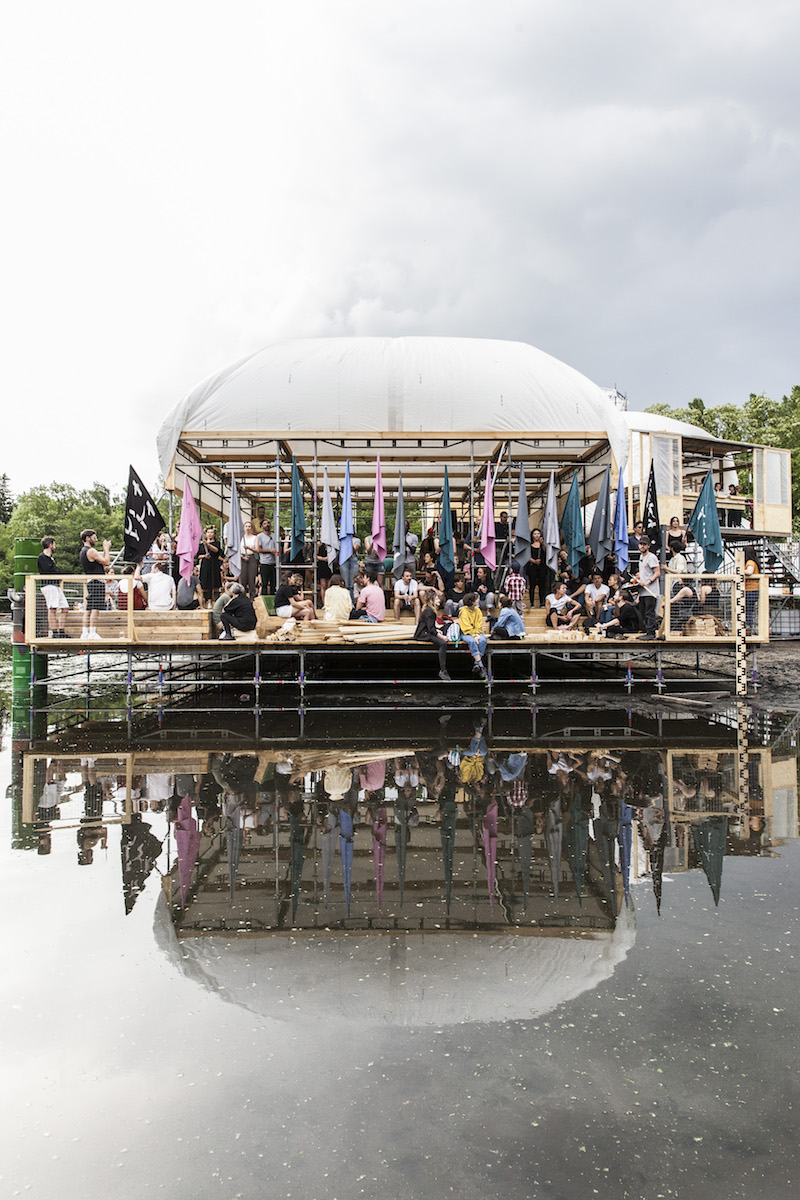 From June 29 to July 15, the Floating University presented Open Weeks of public workshops that saw the space transformed by an elaborate program of talks, performances and parties to welcome students and the neighboring community. To capture some of the process and concretize many of the discussions around space happening at the Floating University, curator Gilly Karjevsky developed the ‘Lexicon’ program, which mapped how participants consider the use of spaces that are normally kept apart: the kitchen and the study, the bar and the auditorium, the hot tub and the library, the laboratory and the street, the university and the park. In a workshop on ‘Pseudo Public Space,’ architecture professors Helen Stratford and Amro Yaghi from Sheffield University collaborated with local architects ON/OFF to examine uses of actual public spaces in the city through performative methodologies. After the intense construction of the Floating University, the Open Weeks allowed participants to bring theory and practice together through discussion and engagement with the surrounding urban area.

The Open Weeks will resume in autumn but, in the meantime, you can catch a glimpse of the Floating University facilities every Thursday, starting at 6PM, through the weekly “rubber boot tours” of the buildings and installations.