This summer, The Institute of Contemporary Art/Boston inaugurated the ICA Watershed, a satellite art space that aims to extend the institution’s cultural footprint across the harbor to the historic East Boston Shipyard. Renovated by Anmahian Winton Architects, the formerly-condemned copper pipe factory has become a 15,000 square-foot cultural space for exhibitions of blue-chip artists and local, teenage photographers alike. In theory, its premiere exhibition, ‘Diana Thater,’ makes perfect sense for the radical space: dynamic new media that highlights its surrounding architecture with universally-accessible subject matter. However, the civic concerns of the ICA’s efforts to revitalize the building and contextualize its history, engage the community with free admission, and interact with the natural and cultural landscapes around it are watered down by the spectacle of the exhibition’s aesthetic emphasis. 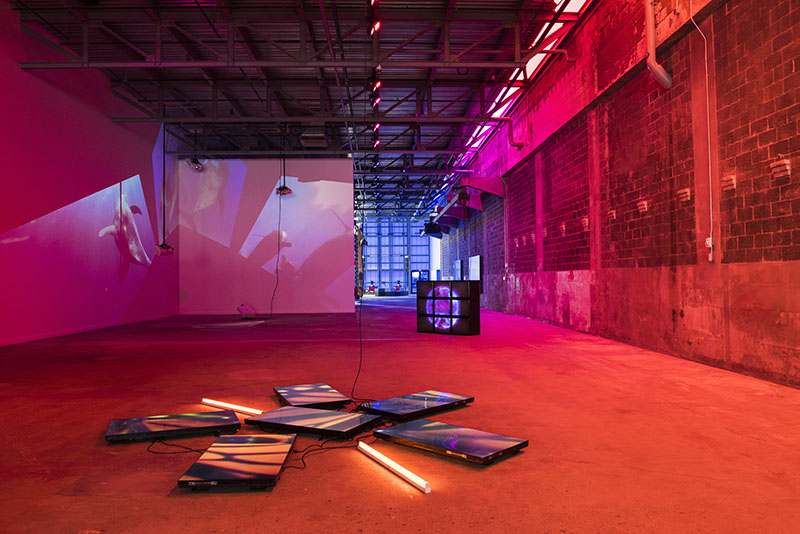 To access the Watershed, the ICA offers a free-with-admission, six-minute ferry ride, which provides a cooling ocean breeze and affords great skyline views. After docking, visitors guide themselves along a five-minute walk through streets sprinkled with foldout signs pointing toward the Watershed. Once inside, a shipyard gallery contextualizes the area with maps and histories, including a handwritten map of local restaurants, with all material in English and Spanish. (In 2015, just under 55 percent of East Boston area residents identified as Hispanic.) As viewers finally enter the rainbow lights and sprawling monitors of ‘Diana Thater,’ didactics dissolve into dolphins. 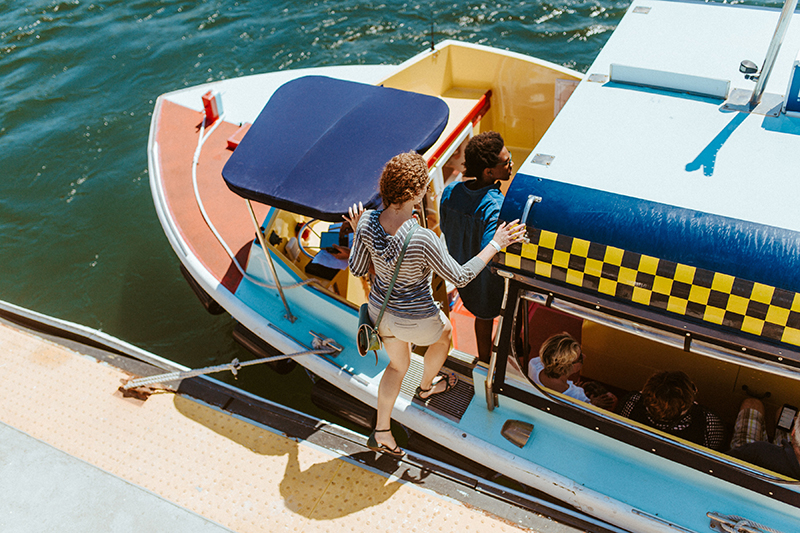 The ferry to the ICA Watershed // Photo by Ally Schmaling

Thater fragments mesmerizing images of animals in sizable wall projections and heavy floor monitors, creating a space lit more like a nightclub than a museum. As these images ebb, they become paradoxically more familiar in their universality, evoking stock photos and screensavers, and less known in their generic anonymity. Thater does not create portraits of these animals that lack individuality, but rather mediates on them formally through light and space. The Los Angeles-based artist, known for her pioneering approach to film and projection, toils with our understanding of the image, not their image.

This spectacle is formally enticing. In Untitled Videowall (Butterflies) (2008), the kaleidoscopic shimmering of patterned butterfly wings flap alongside steady, neon orange tube lights. Duration does not appear in the tombstone information because the works are about our experience of light, which is enduring, rather than narrative. While we circumambulate their screens, the animals do not pull us into their environment; the patterns appear at a scale that is so large, their environment is unidentifiable. The creatures only exist in the architectural environments of their monitors, calling for a heightened awareness of our experience, not theirs. In direct opposition to the purported political impetus for the exhibition, we are never urged to consider their endangerment. 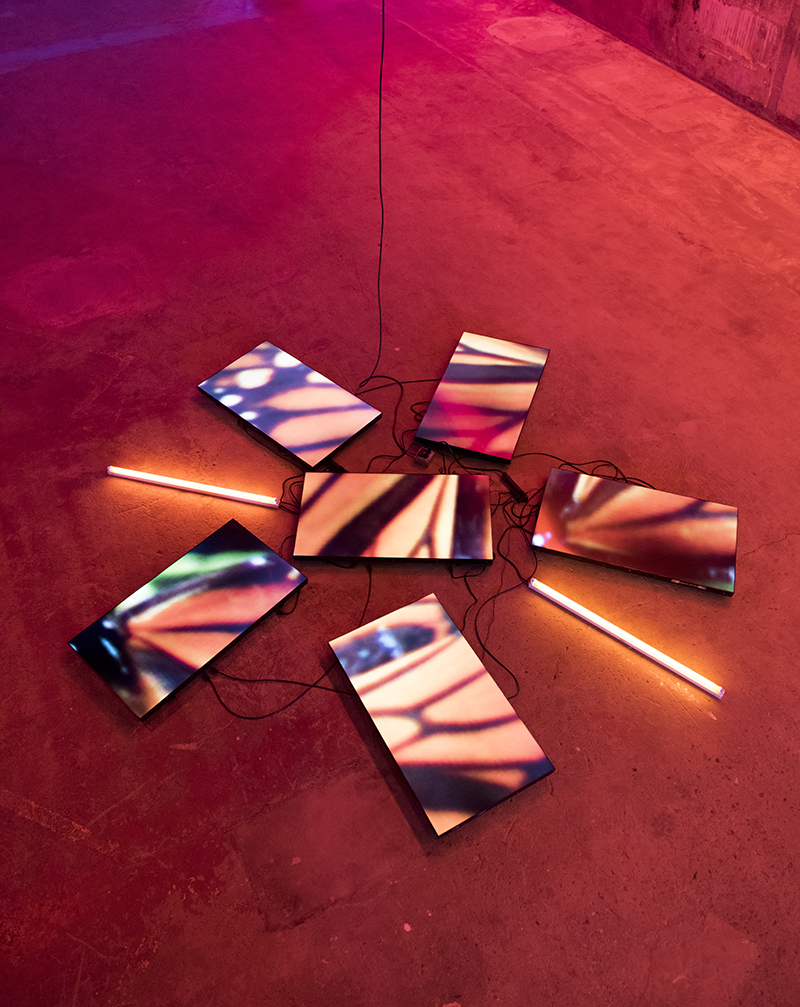 Wires and projectors, the apparatuses of the moving image, cast shadows on Thater’s imagery. The artist foregrounds our environment over her subjects’ realities, emphasizing modes of producing images that distract from the grave reality of their situations. During a daytime visit, natural light, leaking into the space from its open entrance, actually impedes the crisp edges and vibrant saturation of the imagery. Delphine, a five-channel projection of dolphins in different planes that is the opus of the exhibition in both scale and acknowledgement of the aquatic Watershed space, creates a spectacle of projections that exist with, instead of against, the architecture. While our skin is illuminated by the projectors’ white glows, we are not bathed in the images but rather their light—a narrative that emphasizes mechanics over the content. 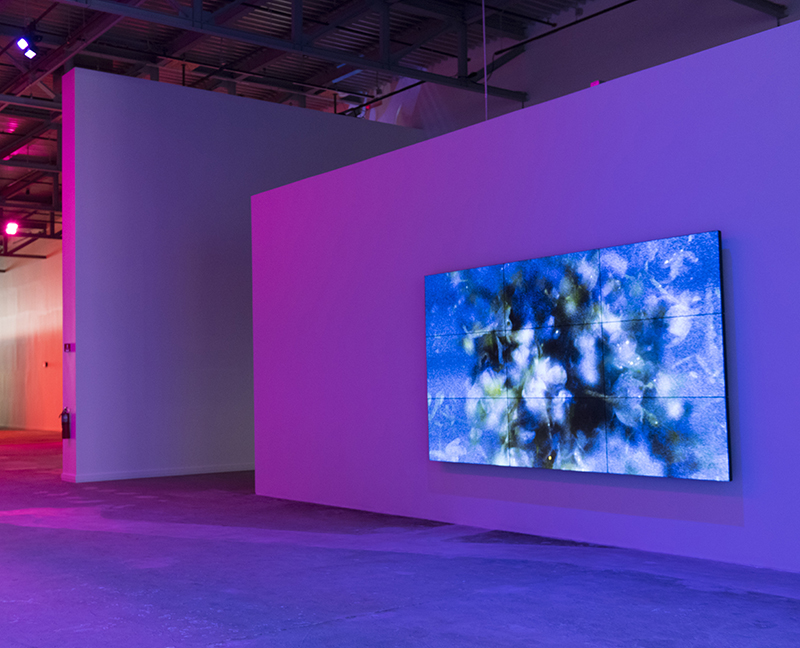 Thater’s most engaging works are her newest: As Radical as Reality and A Runaway World (both 2017). This footage stems from the artist’s visits to Kenya and Sudan to record rhinoceroses and elephants on the verge of extinction. At the sight of the artist herself, equipped with her camera, we are successfully reminded of our own relations to the animals for perhaps the only moment in the exhibition. While billed as “equal parts portrait and landscape,” the work drowns in epochs of similar documentary footage and lacks the specificity of time, place and cause outside of its curatorial annotations. The cruxes of these two-channel projections are the “folded spaces” that Thater carves out between their custom screens, echoing the work of Robert Irwin, to present multiple viewpoints in compressed tableaus. 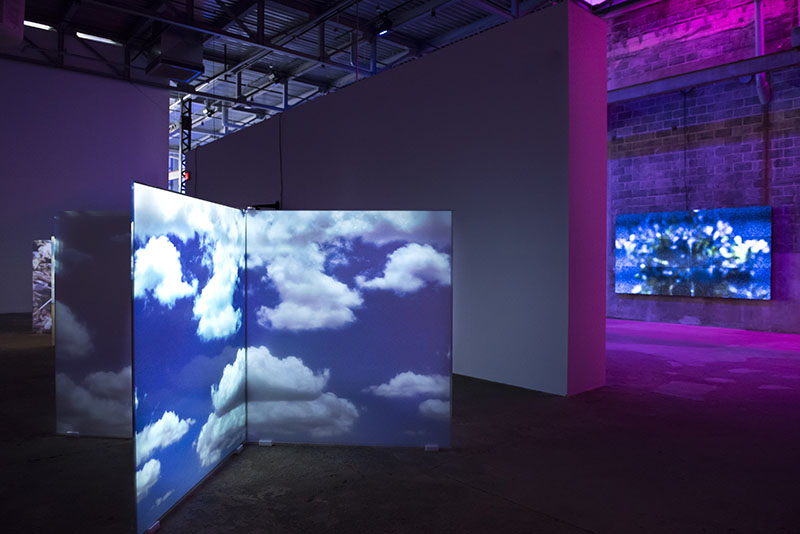 The exhibition argues for the political relevance of the work in relation to the Anthropocene, which Thater defines as “the current epoch, in which human activities are having a tremendously negative impact on the ecosystems of the Earth.” While all images have been shot during the age of the Anthropocene, their presentation emphasizes our experiences with color, light and projection, not our impact on the natural world. Thater succeeds in her angled, magnified, immersive reorientation of our experience with the moving image. However, rather than instilling empathy in viewers (which would make it easier for us to render the animals’ subjectivities), the work presents a McLuhanian emphasis of the medium of the moving image over the message of her visual content. Thater’s exhibition is an aesthetic, apolitical experience that emphasizes viewers’ places in the Watershed and largely ignores their roles in their ecosystems and communities, which is ultimately at odds with the very ethos of the Watershed initiative. 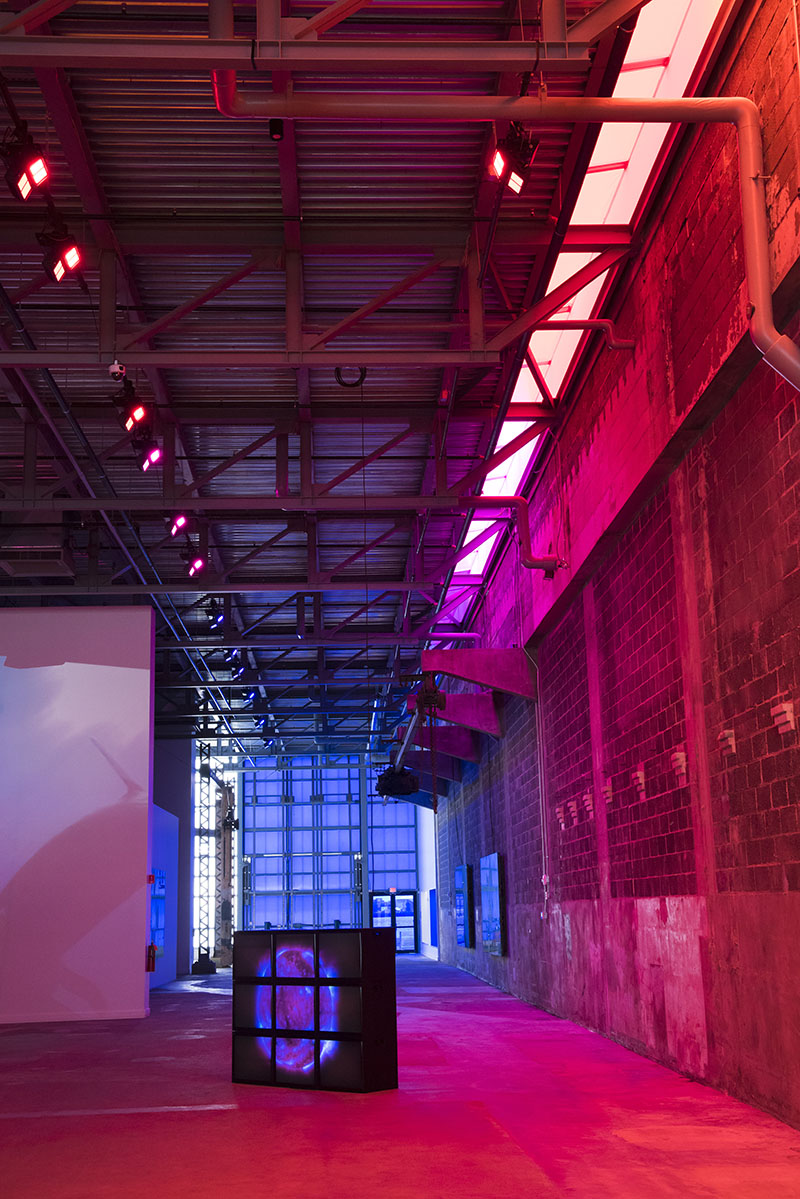 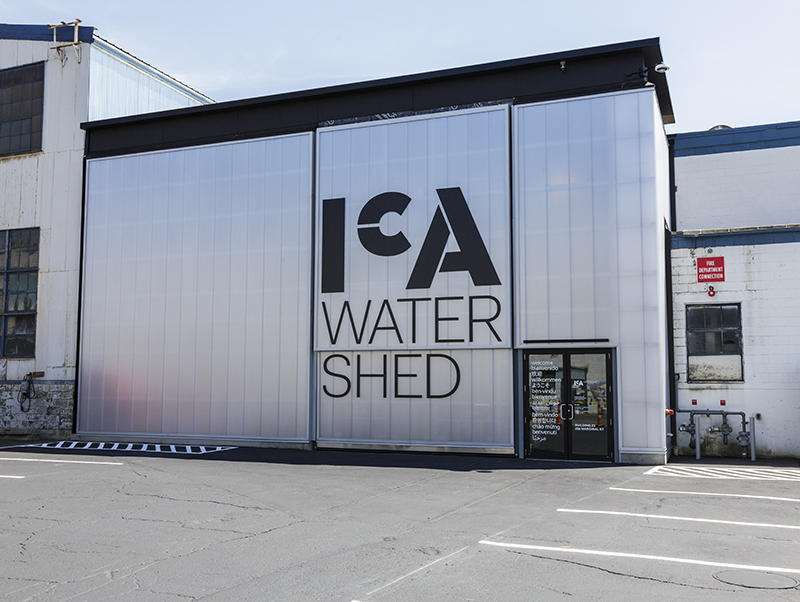 The exterior of the ICA Watershed // Photo by John Kennard