If repression has become the fundamental link between power, knowledge and sexuality we cannot cure ourselves of it without an examination of the ways mental illness and invisible disease operate in the service of life, or better, the production of labor-power. By publicly presenting her deeply personal experiences with mental illness, Lauryn Youden’s art focuses on the history of medicine and care through a feminist lens. Her performative ceremonies combine the traces of a symptomatic narrative with tools for providing self-care. Her objects, installations and writings are nothing less than a transgression, a lifting of prohibition, an irruption of speech, a reinstating of pleasure within reality and a whole new economy within the mechanisms of control. They are a charm of powerful trouble. 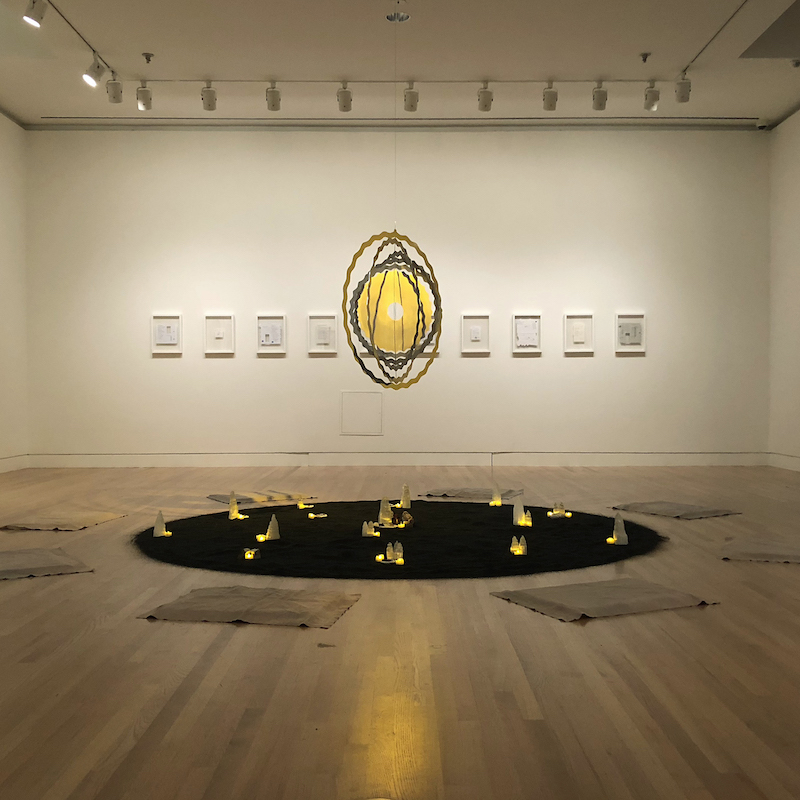 Lauryn Youden: ‘a place to retreat when I am sick (of you)’, 2016 – on-going, Installation view Frye Art Museum, Group Therapy, Seattle, 2018 // Courtesy of the artist

Benjamin Marvin: What types of things have informed your writing process?

Lauryn Youden: I suffer from Generalized Anxiety Disorder, among other invisible diseases. I produce the majority of my writing during panic attacks. Because these anxiety attacks can come with a lot of physical pain and other negative symptoms, which are not commonly understood, I write to produce a record of the experience and life with the disorder. And, in doing so, I am working towards legitimizing invisible diseases medically and forcing them to be taken seriously. I also hope that by making these personal accounts public, others who may be going through similar things may feel recognized and validated.

I’ve been in therapy for the majority of my life, but I came to writing through a specific Cognitive Behavioural therapy exercise prescribed to me during a depressive episode. My therapist instructed me to make a daily schedule and insert activities of self-love and self-care. For example, going for a walk after lunch or even sometimes it would be as simple as eating food; having a meal. Or, just taking time for myself. I would sketch them out on envelopes or whatever paper was lying around. 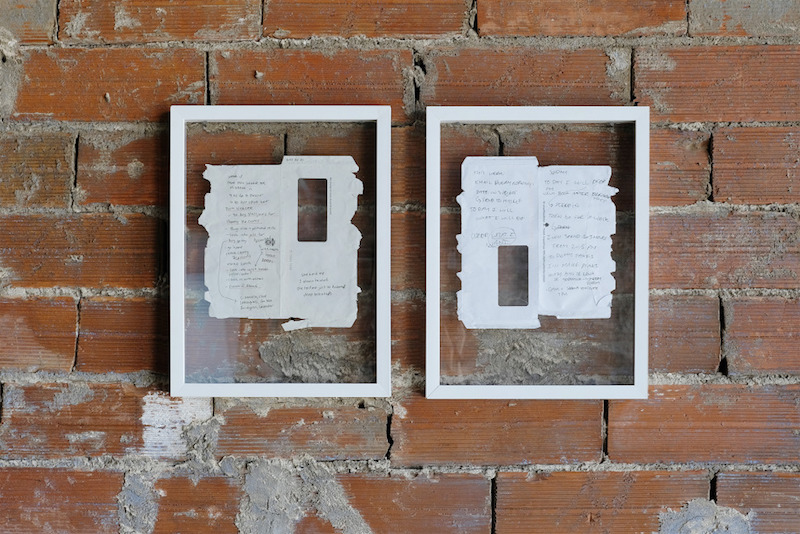 Benjamin Marvin: A reading of the text Nocebo has accompanied your performance of the work You say I for me, recently, at the Frye Museum in Seattle and the Stedelijk in Amsterdam. Both historical essay and illness narrative, it depicts your personal relationship with Seasonal Affective Disorder and your use of lucid dreaming as a way of confronting personal demons. In my reading of the text, I was interested in the way your struggles were interwoven with a history of control over women’s bodies.

Lauryn Youden: When writing Nocebo, I kept coming back to one historical illness narrative, in particular, namely The Yellow Wallpaper by Charlotte Perkins Gillman. While fictional, it was based off Gillman’s experience as a woman, during the late 1800s, who suffered from depression and was misprescribed bed rest as a cure.

The text shows how treatment has been instrumentalized by medical institutions, within the patriarchy, to systematically oppress women and the mentally ill. Now, a hundred years later, thanks to texts such as Gillman’s, women have more freedom in regards to their bodies. But the systems of oppression are still strongly in place. What I take from this text is that writing can be an incredible tool against systematic oppression. As long as it is possible for me, as a woman, to speak about my own mental health, I want to take advantage of this opportunity and speak up. So many women before me could not. 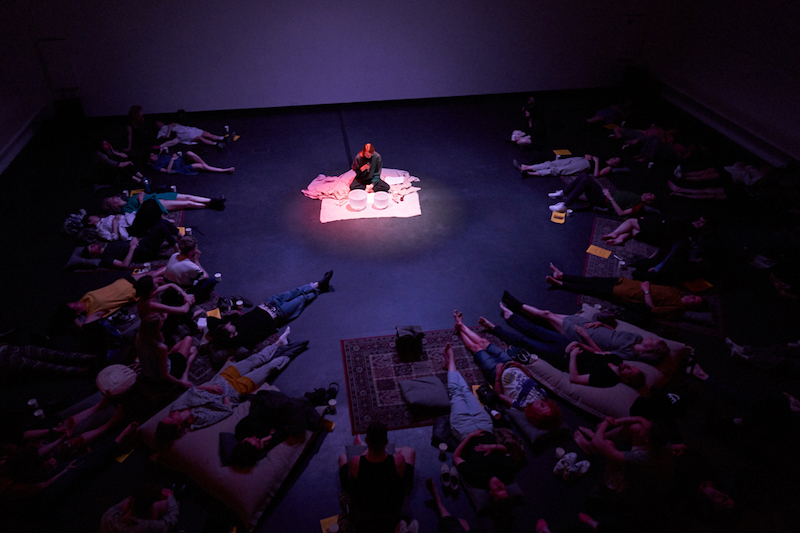 Lauryn Youden: You say I for me, 2018, performative reading, mugwort tea ceremony and sound bath including the text Nocebo, 2018 and music composed in collaboration with Florian TM Zeisig, Stediljk Museum, Amsterdam, 2018 // Photo by Ernst van Deursen

Benjamin Marvin: In the text Nocebo, you use a demon as a narrative device and metaphor for a number of different things. Can you tell me a bit more about that?

Lauryn Youden: Half of the text was written during a panic attack, where I was attempting to describe my symptoms and lived experience of Seasonal Affective Disorder. At the same time, I was doing a lot of research into Christian demonic possession of the female body, particularly in relation to the oppression of female sexuality and sexual trauma. Using the metaphor of the demon, Nocebo allowed me to connect these two lines of thinking and also reflect on the how illnesses were depicted then versus now.

In the Anglo-Saxon period, Christianity sought to control pagan religions by replacing their mythological creatures with demons. The incubus or succubus, which was known for having sex with humans in their sleep, was a scapegoat for sexual abuse. Assailants would often escape punishment by shifting the blame—attributing the crime to a demon. Like female hysteria, demons are a useful lens through which to think about the power structures behind diagnoses, the fear of unknowns and patriarchal oppression. Resurrecting this medieval belief allowed me to reflect on the ways in which we have moved on since then and the ways we haven’t.

Benjamin Marvin: While your research, installations and performances question power techniques and disciplines to which the body has been subjected, they are complicated by the neoliberal concept of “wellness”. When coupled with the impact of structural inequalities on happiness and wellbeing, the aesthetic of your work is implicated in the politics of a healthy body, who is allowed to have a healthy body and who is permitted access to care. Are the aesthetics you appropriate a critique of wellness culture and the ways in which we are unwittingly enslaved by our own repression?

Lauryn Youden: Yes, as someone with an invisible disease, my relationship to wellness culture is very complicated. It’s classist and ableist, accessible only to people who are able to afford it and have leisure time. Our society bases the value of a person on how healthy and productive they are, yet their health is based on how much money they can spend in this industry. Another issue I have with this industry is the prevalence of cultural appropriation. The fact that the industry is often capitalizing on civil rights movements—feminism in particular—makes it even more problematic.

So there are all issues with this industry that often make me want to give up on it entirely, but the fact is that this is all we’ve got at the moment and that, for some people, it is a great help, and I think that is worth remembering. In my practice, I try to salvage what I can from this industry to provide care for myself and others, while avoiding reproducing the same systemic issues. 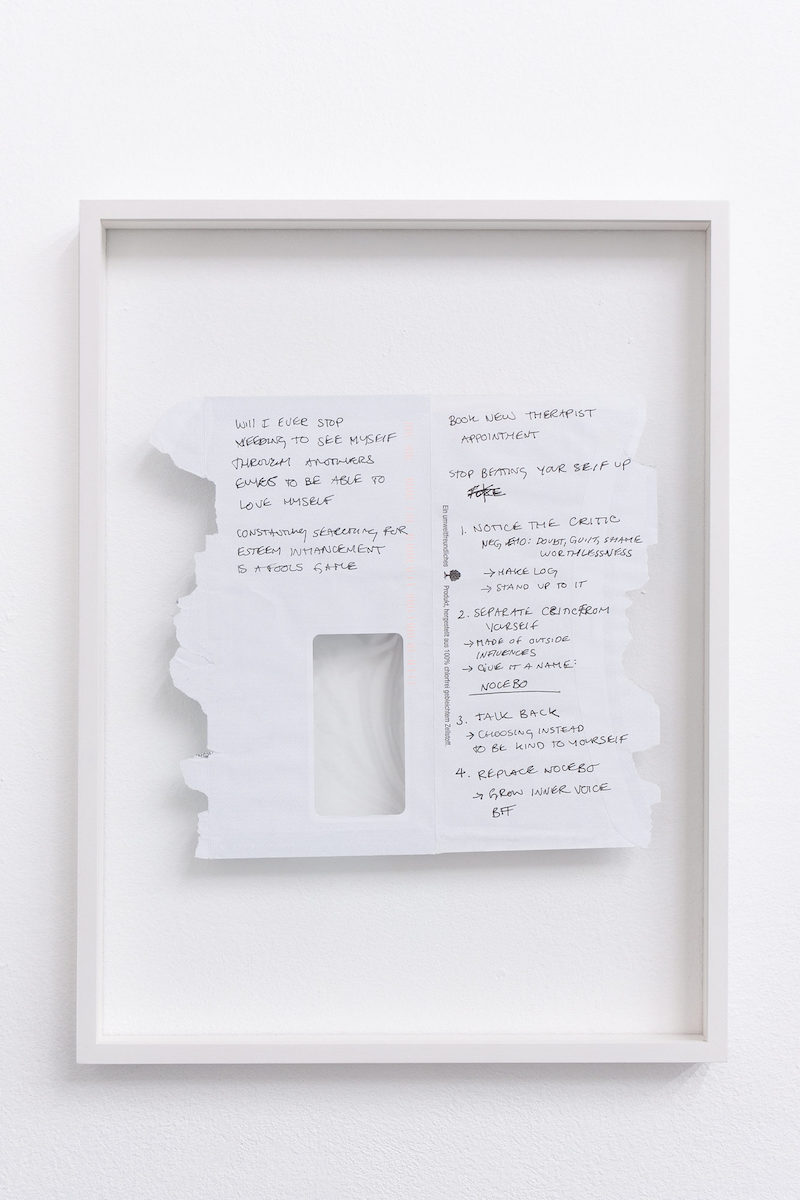 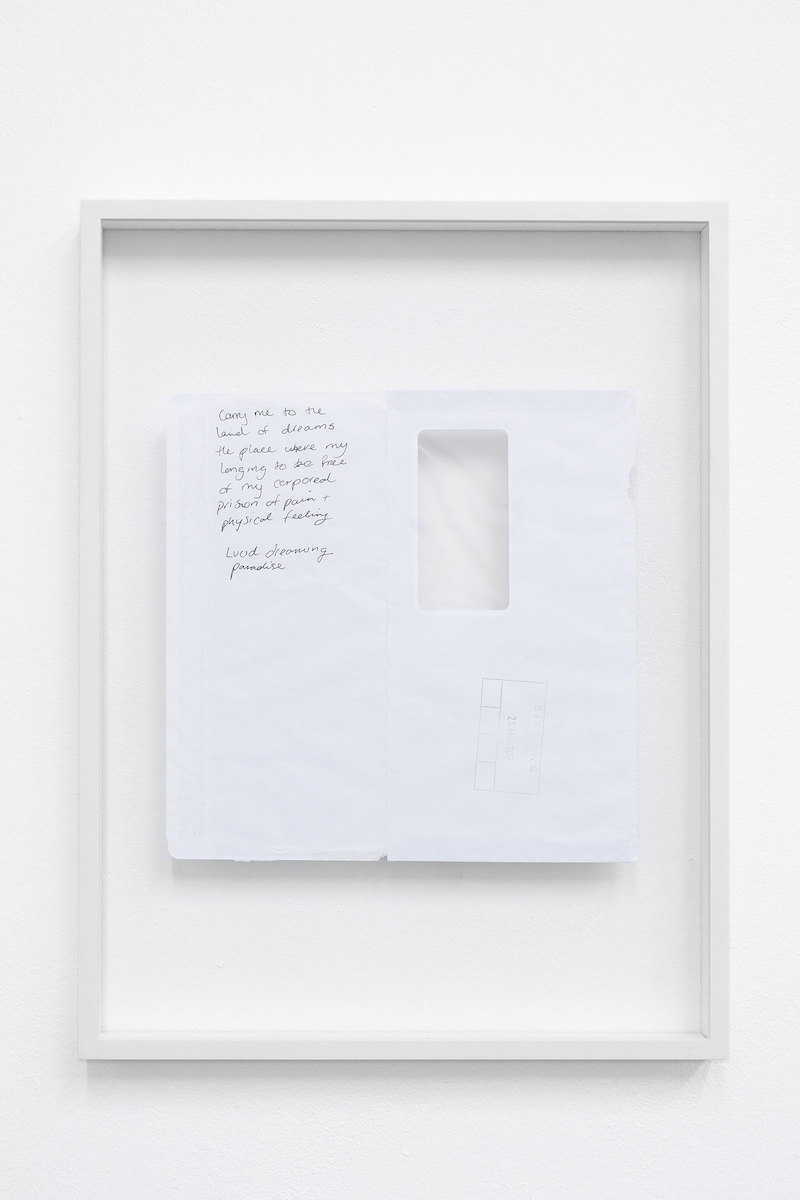 Lauryn Youden: ‘Land of Dreams’, 2017 // Copyright and courtesy of the artist and Exile, Berlin

Benjamin Marvin: As the primary site of reproductive labor, the female body has come to be considered a matter of public interest and public control. Have we been liberated from our domestic imperative by feminism and queer theory?

Lauryn Youden: I think the idea of feminism liberating women from the imperative to reproduce is, to a limited extent, true. Yet there is this myth of female liberation. I was raised to believe that my sexual liberation as a woman was largely due to the “invention” and distribution of modern birth control. Yet, there have always been sophisticated forms of birth control using plant-based medicine. These methods of birth control were predominately handed down by women through oral traditions, but this knowledge has been suppressed, actively erased and delegitimized since the advent of capitalism and modern western medicine. Whoever holds the medical knowledge about reproduction and women’s bodies holds power over society. So it is ironic that the very powers that erased this information have handed it back to us in chemical form as “reproductive freedom”, with a sales tag attached.

Before hitting the Western market, the pill was developed through testing on women in developing nations, against their will, and often without their knowledge. In addition to that, to maximize profits, the pill is being prescribed without critical precautionary measures and given to women who then have to deal with the negative consequence and side effects years later—something which I have personally experienced. So the idea of the female liberated body based on access to birth control is dangerous because the same methods of social control are still in place and the pill’s development was based on women of color being taken advantage of. Basically, millions of women have been and are still actively harmed by something they are being told to celebrate.