DAAD Galerie’s new exhibition ‘Deep Sounding – History as Multiple Narratives’ explores the act of recording and relaying historical events. The show considers historiographies by introducing multiple perspectives to what would usually be taken as historical fact. Accompanied by a performance programme, the exhibition presents works by several international artists working with different mediums to narrate personal experiences of their individual cultures.

Many of the works in the show deal with breaking linearity, altering imagery or rearranging documentary material to rewrite an existing history. In Erzen Shkololli’s ‘Albanian Flag on the Moon’ (2001) the Kosovan-Albanian artist alters the photograph of Apollo 12 astronaut Charles Conrad flying the US flag on the moon, to make it appear as if he is holding the Albanian flag. The piece is both ironic and hopeful; by dating the image ‘July 1999’, Shkololli is connecting the first lunar landing, which happened 30 years before this date, and the end of the Kosovan war.

In Albania, pitching the flag on a piece of land is a way to mark your territory, so the artist uses this humorous depiction to convey the extent of Albanian patriotism, even while the country is in ruins. Shkololli’s work proves to be paradoxical; the piece mocks Albanian nationalism but also appears to champion it. As an ethnic-Albanian artist, he is able to view the current state of his country from a critical perspective, but cannot deny this almost extreme patriotism that comes with being raised in a Communist-ruled country. Using only photoshop, Shkololli has re-written history and alludes to the idea of a “fresh start,” all the while bringing to light the country’s state of uncertainty after the war. 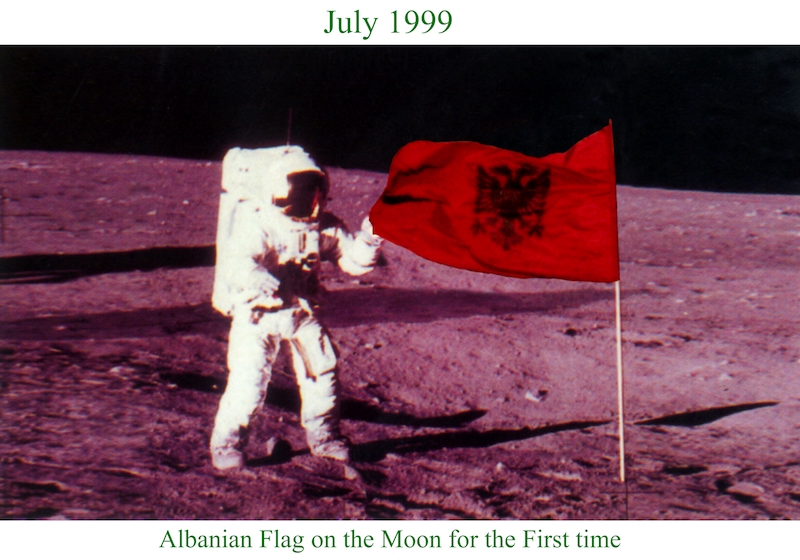 Erzen Shkololli: ‘Albanian Flag on the Moon,’ 2001 // Photo courtesy of the artist

Similar themes are explored in Anri Sala’s ‘Intervista (Finding the Words)’(1998), a video installation the artist created while studying at the Ecole Nationale des Arts Décoratifs in Paris. The video documents Sala discovering an old reel of film and playing it to his mother, Valdet Sala. The soundless film is from 20 years prior and depicts Valdet as a member of the Albanian Communist Youth Alliance. She is seen standing at a podium with Albania’s former dictator, Enver Hoxha, during a congress meeting, after which she is interviewed. His mother does not recall the event happening and the soundtrack to the film is lost, so Sala attempts to reconstruct her words from the interview by visiting a school for the deaf, where the students’ ability to lipread helps him add subtitles to the video. Valdet is then forced to face a younger version of herself with controversial ideals. She struggles to accept that she once spoke so romantically and passionately about the Communist regime that brought her beloved country to ruins.

The documentary-style piece is reflective and explores the social and political turmoil Albania went through during the 20-year period between the time she was interviewed and when the artwork was made. Valdet’s political beliefs are called into question: now that she has children and has experienced life in the aftermath of Communism, does she still hold the same ideals? The piece explores guilt and morality, often making it uncomfortable for both the viewer and the subject. Watching the film, you feel as though you are entering a very personal conversation between family members and question your own standpoint when it comes to forgiveness.

The artworks in the exhibition explore subjective historiographies that emerge as a result of multiple perspectives. The pieces are based on factual political events and explore how those events impacted certain cultures, resulting in work that feels very personal. One artist included in the show, Serbian-born Milica Tomić, often uses socio-political themes in her work. Her video installation, entitled ‘XY Ungelöst – The Reconstruction of the Crime’ (1996/1997), is a response to the political actions that led to the beginning of the Kosovan war and the Yugoslavian war. After protests from the ethnically Albanian population against the suggested removal of Kosovo’s autonomy, the Serbian army and police forces shot indiscriminately into a crowd of protesters and killed 33 men and women. The piece includes several Belgrade-based artists undressing out of their Balkan-style clothing, a representation of the protesters losing their lives. A number of them fall back into snow with their arms raised as if they have been shot, their bodies disappearing but leaving their outline in the snow. At one point, Tomić appears as a “Kosovare,” a mythological female figure who cared for Serbian soldiers after their defeat at the Battle of Kosovo.

The title of the piece refers to ‘XY Ungelöst,’ a German television program that presents cases of unsolved crimes in the form of dramatic reconstructions in an effort to solve them. Tomić uses the basis of this TV show to depict this human rights crime that was never publicised by the media. In the video, the artist appears as a blind witness to the crimes against the Albanians, with her eyes closed and an artificial pupil painted on her eyelids. As both countries have a history of extreme nationalism, the idea that this Serbian community of artists appears to be symbolically siding with Albania is quite radical. The piece was considered to address an almost unspoken taboo; Tomić brings to the surface events that have been officially repressed and discusses them from an unprecedented perspective.

Overall, ‘Deep Sounding – History as Multiple Narrative’ is a thoughtful and reflective exhibition that brings to light political and cultural issues from multiple perspectives. It questions the way history is usually told and who usually tells it. The artists showing in the exhibition help give a voice to situations that may have been misrepresented or even not represented at all. While some pieces confront the subject comically, such as Shkololli’s ‘Albanian Flag on the Moon,’ others relay concerns of biased media coverage and present the idea that there are many sides to every story.