The lights go off and one powerful solo performance is about to follow the last. It’s the second night of the Heroines of Sound Festival at Radialsystem in Berlin—a festival dedicated to past and present female electronic musicians. The stage turns orange and blue and Elsa M’bala starts fusing recordings of her home countries—Germany and Cameroon—with digital sounds and her own voice. Visuals and spotlights announce Tatiana Heuman, Argentinian drummer and producer from Buenos Aires. Standing up, moving to each beat, her stage presence and corporal expressions are as captivating as they are alluring. We follow percussions and samples stuttering in infectious chaos mixed in with her own filtered vocals. She describes each song as if she’s a preacher giving voice to contemporary witches. 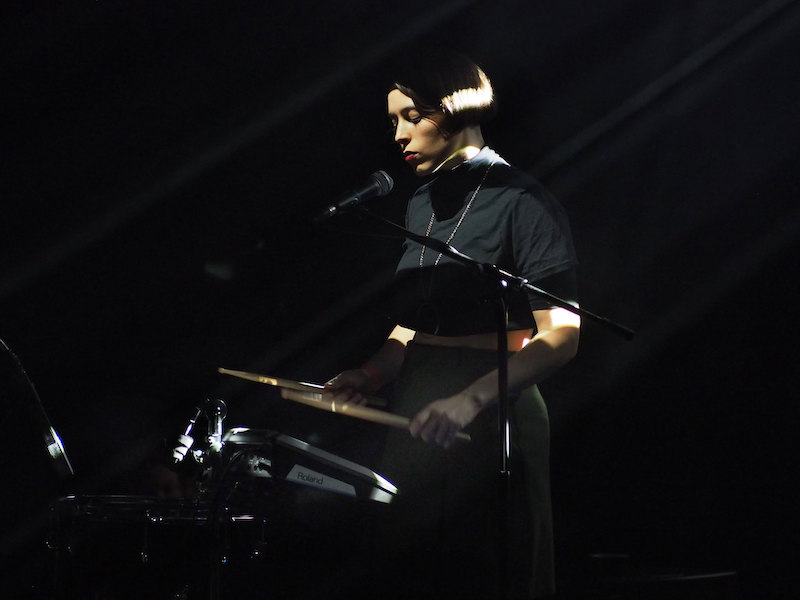 After this full-body performance, a much more reduced body language is about to take centre stage. In classical laptop-performance vein, KSEN. takes a seat. She is composed, with eyes focussed on the screen, her experimental electronic live set starts. The soundscapes, combined with her stage presence and the soft lighting circling around her, seem airy, yet complex for its manifold rhythmic patterns inspired by folk music in Croatia and the Balkan region. A noisy performance that is extremely intense, both physically and emotionally, follows. Flickering images depicting violent footage of the political turbulence of the Peruvian armed conflict rush behind composer and instrumentalist Alejandra Cardena aka Ale Hop. Her electric guitar in front of her, she smashes her fist onto the strings in rhythmic hits. 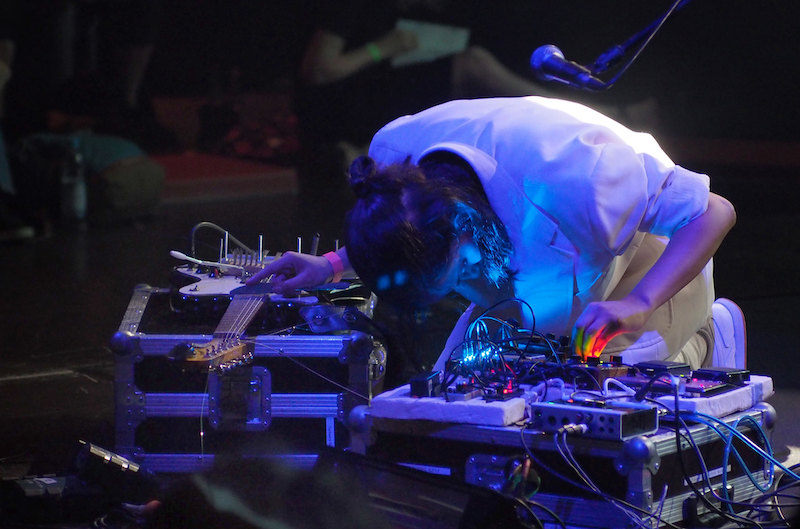 Since 2014, the festival founded by Bettina Wackernagel has been working towards strengthening the proportion of woman artists in the field of music. The question of who gets in and who doesn’t should not be left uncontested—whether this regards festival line-ups, concert halls or history books. The Heroines of Sound Festival is one that took on this challenge, demonstrating how important it is to acknowledge those who came before you. Elsa M’bala, for example, remembers being very into anime and Japanese action movies growing up. While intrigued by their 80s synthesiser sounds, she was hesitant, questioning whether they were “black” or “female” enough for her to explore them. Her second-guessing her choices based on her gender and ethnicity makes it clear how those intersect. Further, it shows how important it is to have role models and to unlearn essentialist definitions we confuse with universal truths. 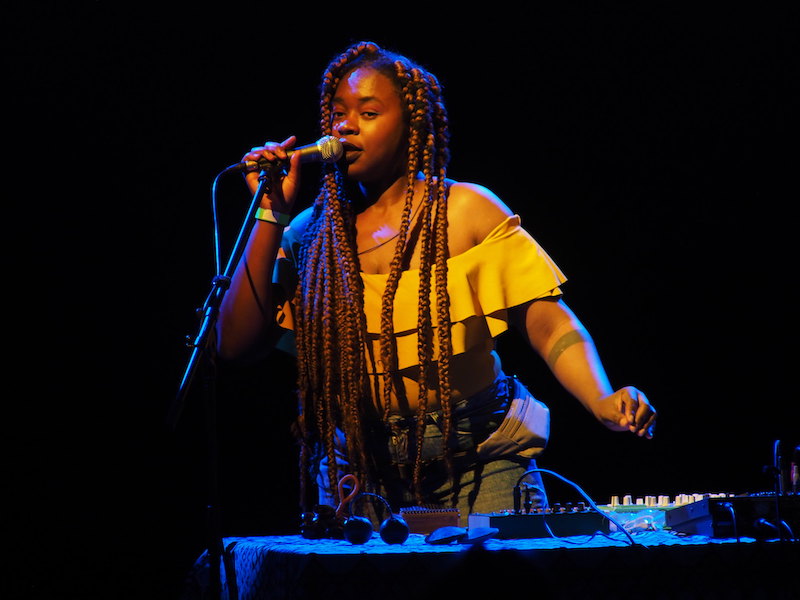 Elsa M’bala: ‘I am’, Performance at Heroines of Sound Festival, 2019 // Photo by Udo Siegfriedt

Guest curated by Sabine Sanio and Antye Greie/AGF, this year’s edition of Heroines of Sound brought together contributors from fourteen different countries to investigate borders and their crossings. Questioning both normative as well as territorial borders, it became all the more pressing to open up the discussion around gender-based disparities in electronic music production by including perspectives outside of Western biases. During the panel discussion led by Antye Greie/AGF on the second day, Cardena/Ale Hop fortified this when she explained how womanhood is always a matter of race and how feminism is best understood from the margins and not from the centre. 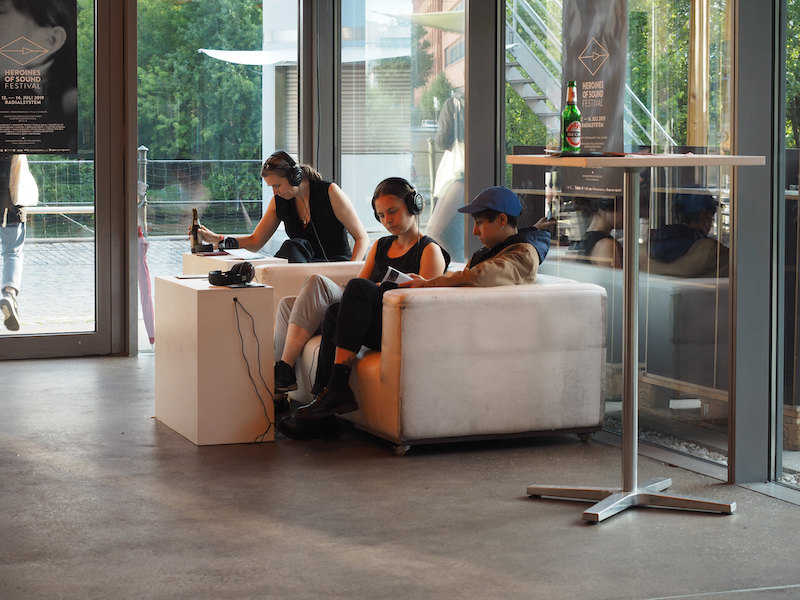 The panel ‘Female Future Sounds,’ moderated by Anna Schürmer, kicked off the festival’s 6th edition. Nina Dragičević, Irene Suchy, Marleen Hoffmann and Bettina Wackernagel spoke about personal sound heroines; whether sound has a gender; if we live in a post-feminist era; and how we remain hopeful when we feel like nothing is changing. With a nod to the collective female:pressure, they insisted that gender keeps playing a role in the production, dissemination and reception of sound. Female:pressure is a network comprising over 2400 members from 77 countries. From 2012-17, they compiled data from major festivals in Europe and North America (majority), Asia, South America, the Pacific and the Caribbean. Only 14% of all acts were female acts, an overwhelming 79% were male, with 7% of mixed acts and 1 % unidentified. This major discrepancy is not evidence of a lack of women in electronic music. It is evidence of an absence of acknowledgement.

In light of this, the Heroines of Sound Festival couldn’t be more important. Three nights were almost not enough to explore its variety: chamber music appropriating unusual instruments, such as in the compositions performed by Ensemble LUX:NM on the first day by composers such as Carola Bauckholt, Lisa Streich, or Laura Mello and Judit Varga who were commissioned by Heroines of Sound; a DJ-set by Chica Paula fusing techno with ambient and house; immersive multi-channel compositions by, for example, Moroccan sound artist Sukitoa o Namau; videos by Gabriele Stellbaum; a sound collection including tracks by Akkamiau, Bebe Barron, Chaya Czernowin, Alessandra Eramo and Beatriz Ferreyra; as well as film portraits including pioneers such as Maryanne Amacher, Eliane Radigue, Beatriz Ferreyra and Suzanne Ciani next to contemporary sound producers such as Marta Zapparoli and MimiCof aka Midori Hirano, portrayed by Beate Kunath in her documentary ‘Raw Chicks.BERLIN‘. 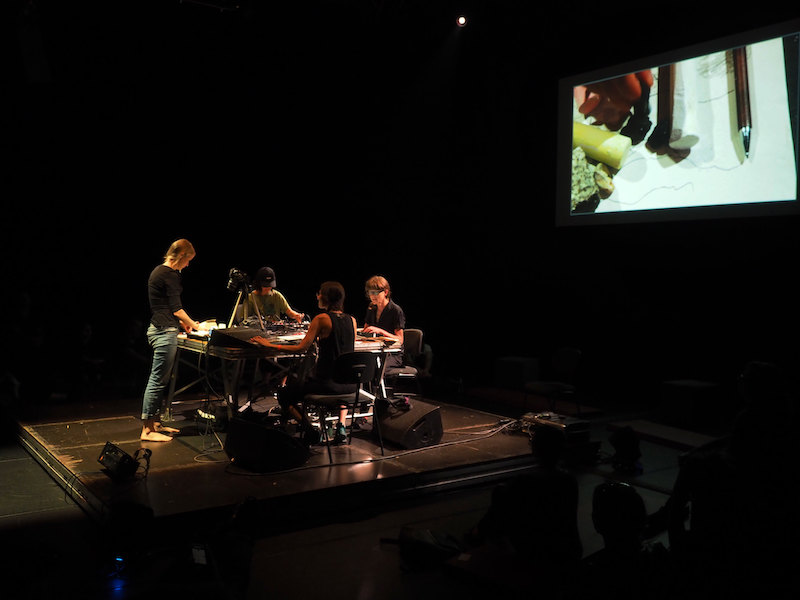 The Lappetites: ‘Borderless’, Performance at Heroines of Sound Festival, 2019 // Photo by Udo Siegfriedt

With ‘Borderless’ by The Lappetites—the live electronic band comprised of Antye Greie/AGF, Kaffe Matthews and Ryoko Akama—Heroines of Sound Festival 2019 found its perfect ending. Their open, participatory structure made their performance a meeting place. A roofing slat was filmed from above and projected onto the wall. Randomly selected audience members were invited on stage, continuously filling the paper with lines, movement, noise and crossings. This audiovisual participatory performance imagined a world without borders, where people can move and meet freely. It was an interaction between different concepts, bodies and materials that took on improvised sonic and visual shapes open to reaction and change. It navigated the space between composition and performance, concept and realisation. And, just like the festival itself, it called for collective listening and action.