Live performance, graphics and film are just some of the media through which British-Ghanaian artist Larry Achiampong explores class, race and postcolonial society in a practice that delves fluidly and simultaneously into the past, present and future. In the multi-disciplinary project ‘Relic Traveller’—a pop-culture twist on postcolonialism that exists in successive phases since its first in 2017—Achiampong imagines a radically decolonised, apocalyptic future in which the Global West collapses but the African Union survives. The Union’s Relic Traveller Alliance sends travellers to explore what is left of the outside world and unearth lost testimony from a diaspora that had lived under a now-forgotten Empire.

As in much of his practice, the work is imbued with Achiampong’s concept of ‘sanko-time,’ by which conventional classifiers of time dissolve and the viewer is prompted to consider new threads of continuity between the past and present and whether we have the power to intervene in what otherwise feels inevitable. We spoke to Achiampong ahead of the newest phase of ‘Relic Traveller,’ which sees him “remix” the iconic roundels of the London Underground’s Westminster Station, replacing the traditional red, white and blue with new designs in Pan African colours that are based on logos from the Relic Travellers’ uniforms. 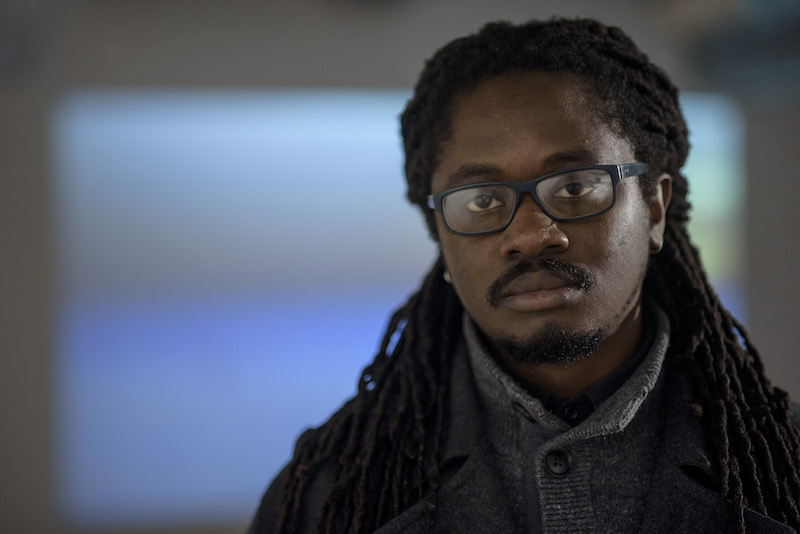 Jo Lawson-Tancred: What were the social and political circumstances that prompted the project ‘Relic Traveller’?

Larry Achiampong: I wanted to make an African space story that has conversations around blackness and, being a parent, I wanted to make stories for my kids and other black kids to see a future in which kids that look like them are travelling to space. I had also been thinking about the increase of nationalism even before the Brexit vote. The African Union has been developing a passport programme for years that will allow Africans to travel across all the African states with no visa, so I was looking at one part of the world, the Global West, where borders are closing, and another part of the world where borders and minds are opening. If, as a continent, you close your borders and your mind, then you close away from culture and from economic potential. In the end you become a relic. That is where the idea came from for ‘Relic Traveller’: it’s set in a time when the Global West has come to a point of calamity while the African Union is increasingly at a point of harmony, of prosperity and, importantly, of independence.

JL-T: Could you explain your concept of ‘sanko-time’ and why it has personal significance to you?

LA: ‘Sanko-time’ brings together two words, time and sankofa, a Ghanaian saying which means “to go back and to retrieve it.” My mother raised me with that saying and it fascinated me as a kid, the idea of going backwards and forwards, not in a linear sense, but in a cyclic way. One example is the inherited aspects of racism that my parents took on, that I then took on and that my children have also experienced. Cycles can be smaller or larger, the wave can have a different shape, but if you don’t consider these parallels of existence you run into all kinds of problems.

With the Brexit vote, I actually thought we would leave. For me, it’s not hard to tell once you think about the past and how, through entertainment and education, the empire has been associated not with forced servitude or labour but with a mythos of greatness and independence that never really existed. It’s just a wet dream of the nation-state. My hypothesis was that it would lead to a UK vote to leave. 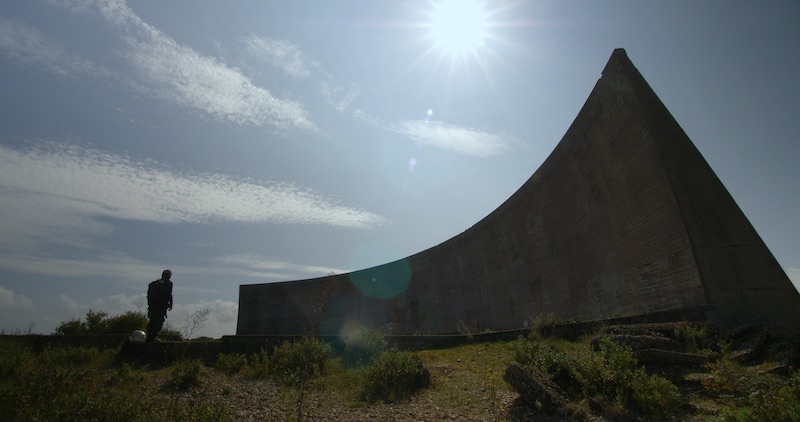 JL-T: The Relic Travellers are employed to mine the past with a focus on unearthing individual testimony rather than, say, the accounts found in history books. Do we need to rethink the way we engage with the past and could the Relic Travellers be a model for this?

LA: The African Union sends out Relic Travellers to pick out individual stories in order to find a way to establish a future from a bottom-up perspective rather than a top-down one. Looking at the pain, the trauma, and revisiting the past, at least the past not simply as we know it or have been taught to understand it, opens up questions that allow us to fill in the gaps. As a kid, I was taught from history books that slavery was a system of trade. It wasn’t, it was one of murder and rape that affected millions of people.

One thing that inspired me was the first ‘Back to the Future’ film. There’s a scene in which Marty sees a polaroid of his family as their heads begin to disappear and they talk about being “erased from existence.” It’s one of my favourite parts of the film because Marty is trying to stop the erasure of his family by making sure certain events happen or by understanding the complexities of the past. I took it a step further and started thinking about what is happening now in order to understand what might come.

JL-T: ‘Relic Traveller’ appears to deal with a certain Western complacency about who holds power and will do so in the future. What do you think are the benefits of imagining alternative futures, even those that some might consider radical or unlikely?

LA: For the last few hundred years the West has been the main superpower but that is changing and what intrigues me is the question of who else is allowed agency over discussing possible futures regarding technology or the way we live our lives? Western practices haven’t always proved successful, or we wouldn’t be in the position we are with the planet right now. When we look at films that explore apocalypse or dystopia, it’s usually from the West’s point of view. The West sees the end, so the world is ending. No experience is happening anywhere else in the world. Well, if the West is crumbling, does that mean the rest of the world crumbles? I’m not so sure. I’m not saying that everything is dandy on the African continent, but ‘Relic Traveller’ is explaining that just because the world is in chaos in this part of the world doesn’t make it the case everywhere. The media talks about fear over the West no longer being a superpower. Well, fear for whom?!

JL-T: Could you speak a bit about why you use such a variety of media and how ‘remixing’ the London Underground roundels fits in with this?

LA: A lot of what contemporary artists produce is in gallery spaces and there are certain people who are made to feel excluded. I didn’t go to galleries until I was pretty much an adult. Even during my Sculpture MA at the Slade, I would make physical works in the day and then make beats in my bedroom studio because I had a feeling that sound and something that could exist online would bypass the unlikeliness of people going to a gallery space.

‘Relic Traveller’ is easily the most ambitious project that I’ve developed and the different media convey different aspects of the message. My films distill this notion of time travel as the visual is dislocated from the audio so that you’re hearing one account but visually you’re travelling and apparating into spaces that belong to a different point in time. They have also become documents that someone can pick up much later on. Where the films are slow and deal with multiple narratives, the physicality of the roundels has a symbolic presence. The sign goes beyond being a patch logo on the Relic Travellers’ outfits to being something that is actually real and exists outside the gallery space. It allows the project to be dynamic and connect with more people.

JL-T: How does this project connect with the wider narrative of ‘Relic Traveller’ and what do you think is the significance of staging your work inside the London Underground and Westminster Station, specifically, with its proximity to the Houses of Parliament, during this politically precarious time? It feels in many ways like a provocation.

LA: It seemed like a no-brainer to bring the spirit of ‘Relic Traveller’ to a space synonymous with travel and time, and to remix an icon that connects so many people. I started to think about the history of the London Underground, even the use of the imperial colours red, white and blue on the logo. I did research into non-European presence in the Underground’s archives and wasn’t too surprised to find only documentation relating to the Windrush [generation]. One pamphlet about what immigrants should expect from the climate, clothing and food when arriving in the UK read like a strange dystopian, sci-fi novel and added fuel to the fire. If a project is going to agitate or lead us to consider histories that are erased or covered, then I thought it could be done in connection with ‘Relic Traveller.’ The intervention with the roundels changes what we are used to seeing and I think when you change something just a little bit it creates an alternate set of possibilities.

It’s also right on the doorstep of Parliament. That is the perfect spot for it to all go down. A big part of the Brexit conversation is the migrant conversation and the myth that the UK can exist without anyone else. You just have to walk around London to see that’s not true. Parliament can’t even create a deal that will allow the UK to continue existing in a beneficial way. Would I be inclined to agree if someone asked me whether the work sparks a potential warning about the future? Yes, it probably does. It’s right in front of you and if you think the idea of being an island nation is so good, let’s see how well you swim. 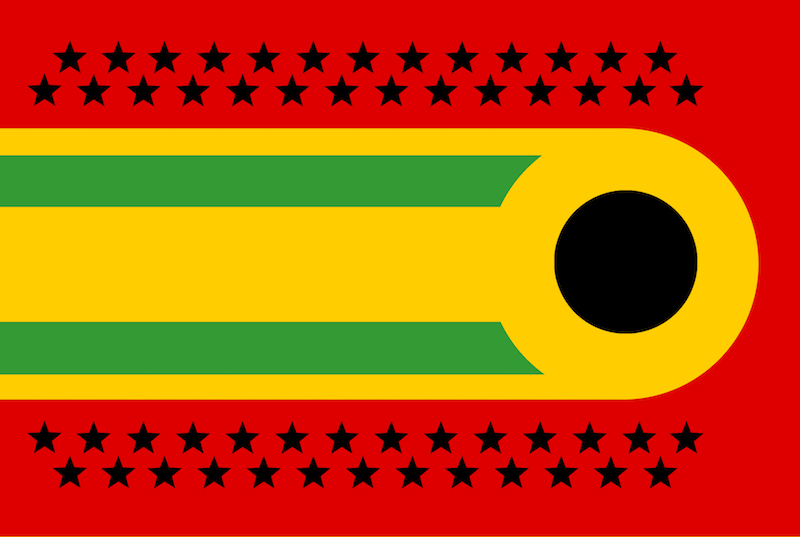