Cevdet Erek is an Istanbul-based visual artist and musician. Trained in architecture, sound engineering and design, Erek has presented his work in major art exhibitions like dOCUMENTA (13), the 12th and 14th Istanbul Biennial and the 57th Venice Biennale. Earlier this year, we were able to see two of his installations in Berlin, at Hamburger Bahnhof and at Gropius Bau.

His ‘Bergama Stereo,’ presented at Hamburger Bahnhof, offered new interpretations of the Pergamon Altar. The title of this work refers to Bergama, the Turkish name of the ancient city of Pergamon, and to the Ancient Greek word ‘stereos’ meaning ‘solid.’ While the original altar is being renovated in Berlin, and will not be on view for several years, Erek’s 34-channel composition brought new perspectives and interpretations to this historical monolith. Erek’s installation at Gropius Bau, ‘Left Right, Stereo’ was presented as part of the performance programme ‘Rituals of Care’. The installation drew directly from ‘Bergama Stereo’; the two pieces of the installation at Gropius Bau—one at the façade of the exhibition hall and the other one in the foyer—referred to the border between the outside and inside space. A new version of ‘Bergama Stereo,’ entitled ‘the Bergama Stereotip,’ has also recently been installed at Arter in Istanbul, as a part of Erek’s solo exhibition Bergama Stereotip, which closed shortly after its opening due to the corona virus pandemic, but will be on view once reopened.

We spoke to Erek about his artistic inspiration, his work in Berlin and the difference between performing as a musician in a band and presenting his work to audiences in art institutions. 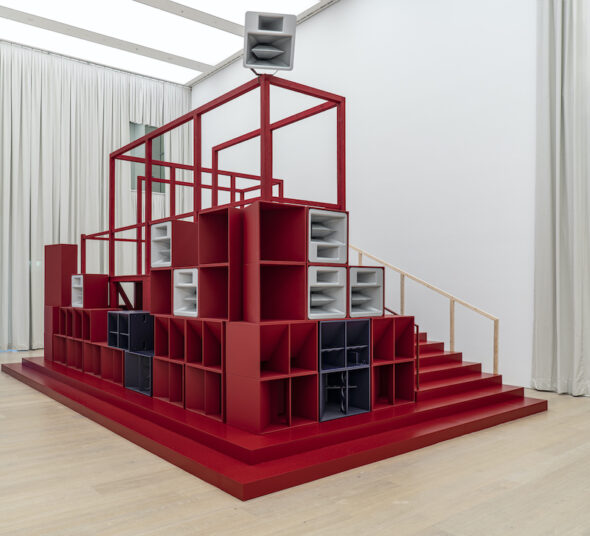 Denisa Tomkova: You combine the spatial and the visual with the sonic to communicate your artistic vision. Can you please tell me more about the process of creating your installations? Do you see sound as something sculptural in your creative process?

Cevdet Erek: I work on the transformation of existing spaces. Lately, most of them include architectural constructions with multi-channel sound patterns propagated through loudspeakers, ceaselessly, then occasionally a performance by me with other people, which challenges the dynamics of its established state. Sculptural? I don’t really use the term sculptural for sounds; I am unable to perceive it that way but I can say that sounds are part of the space-making just as much as the architectural construction is. Do you see it as sculptural?

DT: For me, experiencing your installation ‘Bergama Stereo’ felt like sound was sculpting the space around me. It was sound that created the atmosphere of the work and the experience of the battle between the giants and the gods. Why did you decide to respond to the Pergamon Altar in this work?

CE: I was invited to propose a work to show at Hamburger Bahnhof and the Ruhrtriennale, by the three curators of the project. At that time, I was frequently traveling to Berlin for performances and working on the design of the Radiophonic Spaces project with its team. I have been quite familiar with the city and its rhythm and art in the last two decades, as well as with Hamburger Bahnhof and its historical hall, as a visitor. I was exercising free-association with spatial relationships as well as gathering moments that could happen in that space.

On the other hand, it’s been a long time that I’ve been studying the remains of old towns in western Anatolia, the latest fruit of this curiosity was the installation ‘ÇIN’ that I made for the Pavilion of Turkey at the 2017 Venice Biennale, which was related to ‘Bergama Stereo’ in its form. Then, I remembered the Pergamon Museum—a part of Staatliche Museen zu Berlin, just like the Hamburger Bahnhof—and the construction of the Great Altar enclosed in it, which I could never visit, though I was familiar with its image as shown in Turkish newspapers, as a kind of a childhood memory. I don’t remember exactly when, but it did not take too long to bring these thoughts together and propose some sketches to the curators. 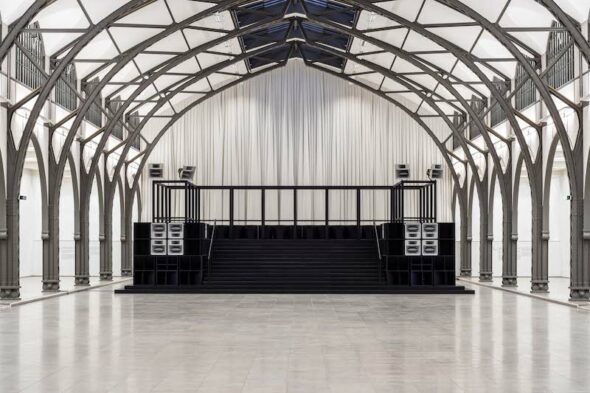 DT: As you said you have spent lots of time in Berlin for work. What is your perception of the city?

CE: I was never a resident. I never stayed more than three weeks. So, as a frequent visitor or as a dedicated tourist who tours for work, my perception is one of curiosity and love. Berlin is the city that I travelled to the most. Though I come from Istanbul, I’ve been to Berlin even more than any place in Anatolia or the Balkans. Berlin is the city with the biggest amount of friends and collaborators, next to Istanbul.

DT: How does your work ‘Stereo’ at Gropius Bau relate to the ‘Bergama Stereo’ work at Hamburger Bahnhof?

CE: The double cassette boombox that I showed at Gropius Bau is the Toshiba that I used to listen to cassettes and radio, copy albums or multiply band’s demos on, in highschool. For ‘Bergama Stereo,’ I took a photo of it on the ground of my garden and submitted it to to be used as a sketch for the installation, to be published on the museum’s website and in the booklet. Then, when I was invited to Gropius Bau, I made a stereo mix of one of the faster beats installed on the left-hand facade of the version of ‘Bergama Stereo’ at Hamburger Bahnhof and played it through that boombox that was placed at the entrance area of Gropius Bau. In addition, banners with the letters ‘L’ and ‘R’ were installed on the exterior of the building—replacing Gropius Bau’s own banners, the same idea with the ‘L’ and ‘R’ flags installed on flag posts at Hamburger Bahnhof—to mark a possible connection of stereophonic sound production and traditional representation of the political spectrum as left and right, and against the classicist and symmetrical architecture of Gropius Bau. 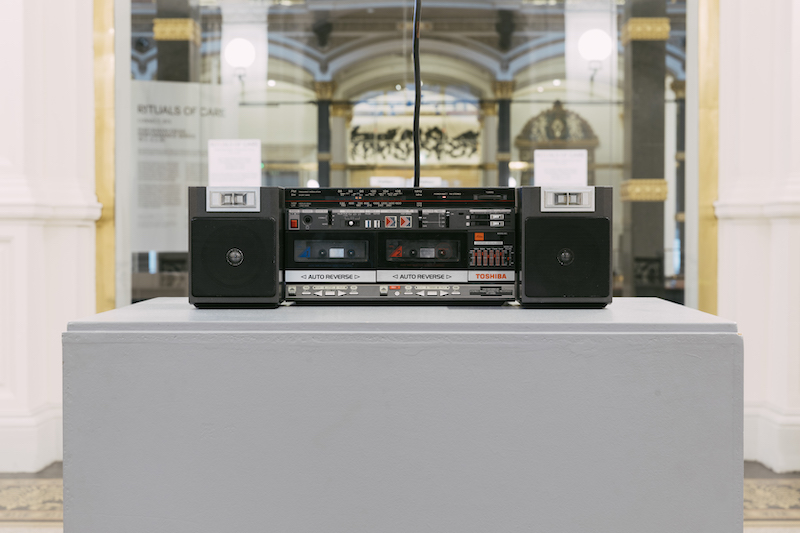 DT: You are not only a visual artist, but also a musician. How do you feel about presenting your work in the art context? How is it different for you compared to performing music in a band, as you did with Nekropsi?

CE: I feel thankful to nature, for being able to perform and experiment in different realms. The attitudes and products are mostly the same or similar, but the different realms shape them, too. The main measured difference would be mostly the act of being on stage and performing/making from the beginning to end on the musical side, as a band or solo performer, while in my installations, I am more occupied with preparing a space and making it inhabitable within the institution in order to give it to visitors.

DT: Your work ‘ÇIN,’ which you presented at the Venice Biennale in 2017, tells an anecdote about violence. Some artists explicitly avoid politics in their work, but sometimes politics are unavoidable even if they are not explicit. Where do you position yourself in regard to politics and art?

CE: The nature of my work is being open to interpretation, while trying to provoke thoughts and reflections. On the other hand, I am trying to be sure that it has a clear position, a strong base that is hopefully also true to where I stand as a person. What the work is not, is more important to me than what it is. I mean, politically speaking, when providing a space and moment for thought, I try to be careful about avoiding false possible interpretations, which architecture and sound could easily cause. By proposing possible new perspectives, I am hoping to contribute something, however small (in time and size), to a free-thinking world. 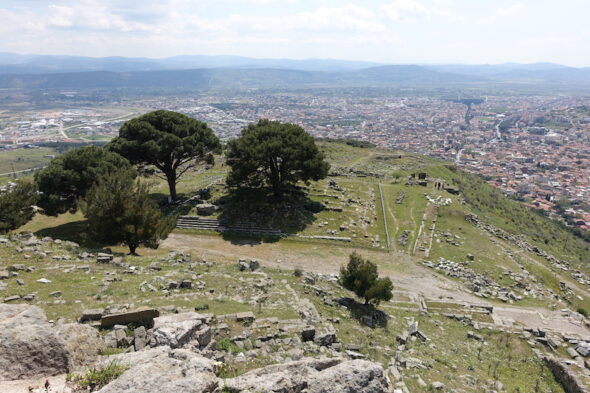 Original site of the Pergamon Altar and its remains seen in front of today’s town Bergama, 2019 // Photograph by Arat and Cevdet Erek