Dominique White’s installations recall nautical, imaginary worlds. They stage “The Shipwreck(ed),” a term that encompasses the past and future of Blackness through the idea of the sea. Her research is inspired by nautical myths of Black Diaspora, accounts of the Middle Passage and the Windrush Scandal, afro-pessimistic and -futuristic theories, leading to a visual atlas of alternative worlds in the sea. In her recent works, exhibited in ‘Cinders of the Wreck’ at Triangle – Astérides in Marseille, she stages the monumental remains of a fictional, yet very actual, shipwreck, recalling the ship as the vessel for Blackness while also trying to destroy this idea. In her declared pessimism, White proposes an image of the State as the Hydra, the multi-headed monster defeated by Hercules but still capable of growing new heads. Employing used and worn out, yet very resistant, materials, like old sails, burned mahogany or tired ropes, White sheds light on the frightening regenerative power of the system. We talked about the political narratives behind her work and the role of water in the history of Blackness. 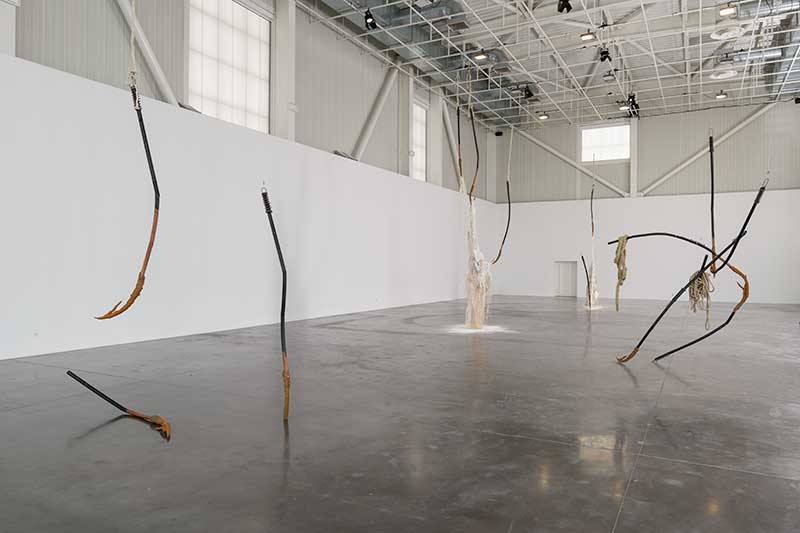 Lucia Longhi: How did you become interested in Black Subjectivity, Afrofuturism and Afropessimism through nautical aesthetics?

Dominique White: I started exploring Afrofuturism and -pessimism when I was studying at Goldsmiths in London, researching Black Diaspora and the idea of statelessness. These ideas were reflected in my family as part of the Windrush generation, along with the UK’s rejection of these issues. So I started to look into the idea of utopia, or new imaginary futures following the disillusion of legal immigration and nationality. The theme of the shipwreck only emerged in late 2018.

LL: Were you less pessimistic at the beginning?

DW: There were some elements of hope initially. My recent research is very pessimistic. The work was initially about pure Afrofuturism. I was imagining possible future worlds in the sea, which, contrary to outer space, is tangible and connected to the history of Blackness. Techno music also played an important role for me; it is another form of the same theories, exploding in different ways. A lot of Detroit Techno of the 80s and 90s was inherently afro-futuristic and afro-pessimistic. Christina Sharpe’s book, ‘A Billion Black Anthropocenes or None,’ was also very important to my understanding of the waters in this context. 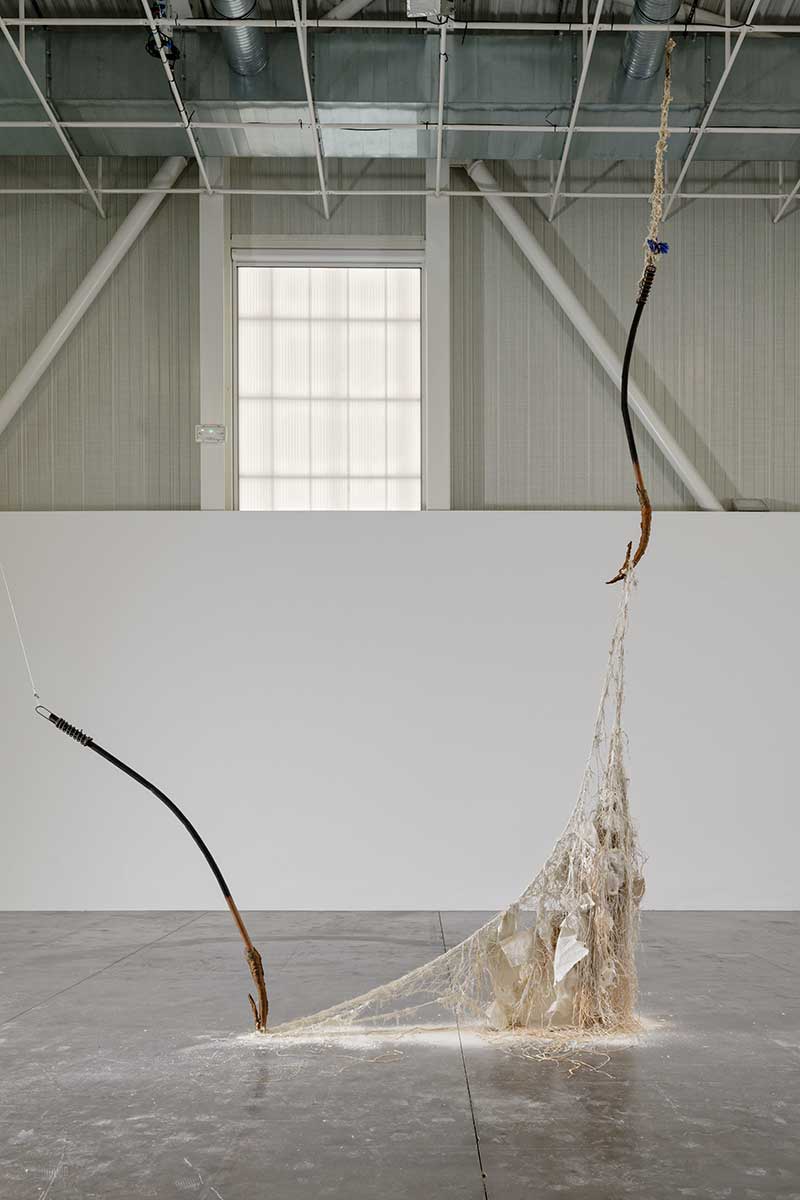 LL: Could you expand on the concept of hydrarchy, which appears to be linked to your work a lot? The definition reads: “Hydrarchy is the organizational structure of a ship, or the ability for individuals to gain power over land by ruling through water. It also attests to the rebellious sailors, slaves and oppressed individuals who acted out against the land powers of the imperial governments.”

DW: The term was coined by English philosopher Richard Braithwaite to describe early capitalism and how it gained power over land via the sea. So the early construct of capitalism was the slave trade, moving goods through water in order to capitalise on land. America became a rich nation because of this trade and because of the sea. I am interested in how hydrarchy can be used as the inverse, for example when pirates started to undermine the power of capitalism with riots on boats that disrupted the chain of goods and money. With the term “The Shipwreck” I want to destroy the idea of the boat as the vessel of Blackness as a fungible good, a vessel of death, still today. 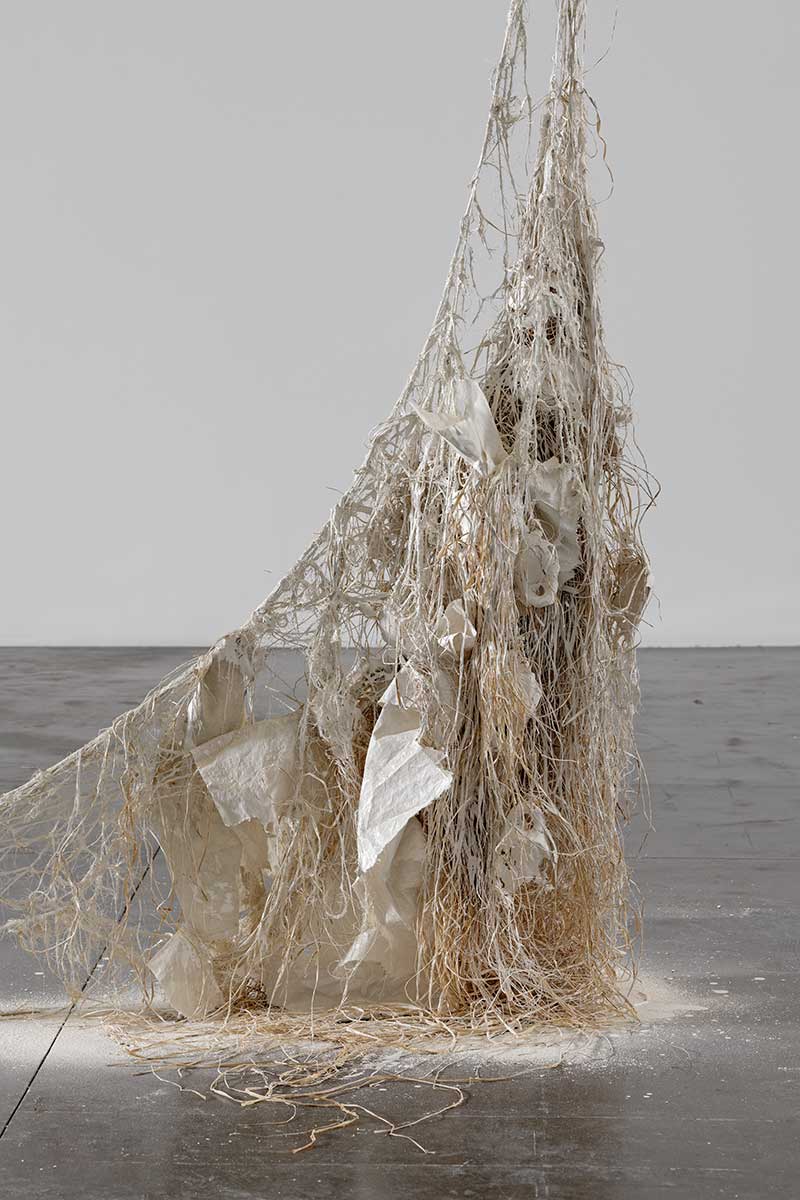 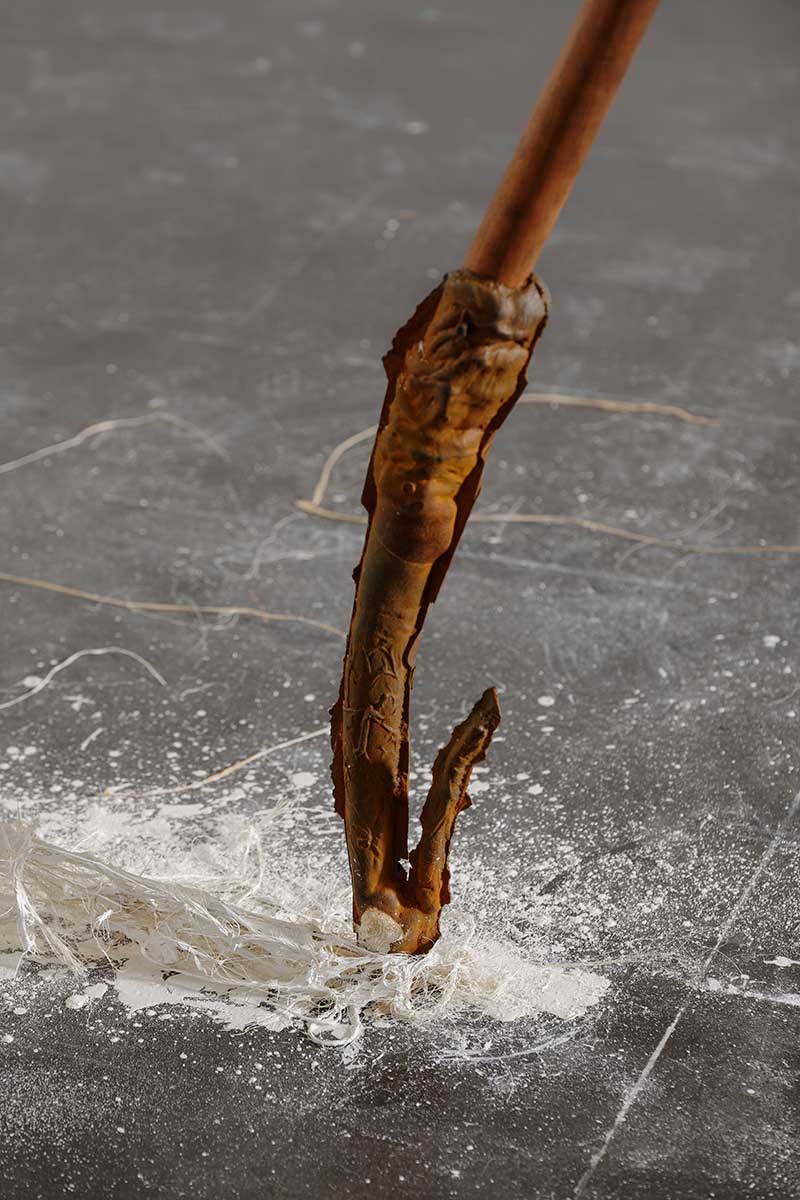 LL: In your work, water seems to have a double quality, destructive but also regenerative. You stage the disruptive force of waters in corroding materials, bodies and histories, but at the same time the sea is the place for alternative futures.

DW: Water is in everything; it’s not good or bad. I see it more as a regenerative unknown space, where everything is possible because everything collapses—there are no boundaries, there’s no time, there’s no land. I relate a lot with a sentence by Christina Sharpe: “Nobody dies of old age at sea.” It reminds me of all these myths of people who would jump in the sea not from fear but as a way of going home, because you are there for eternity, in a different form of energy.

LL: You choose to represent the State as the Hydra, the legendary monster defeated by Hercules.

DW: I was inspired by the book ‘The Many-Headed Hydra: Sailors, Slaves, Commoners, and the Hidden History of the Revolutionary Atlantic’ by Markus Rediker and Peter Linebaugh, in which capitalism is identified with Hercules, and the Hydra, with its regenerating immortal heads, are the slaves and rebels who pushed back against capitalism and disrupted the slave trade. I decided to invert this vision: the Hydra is the State we need to destroy, and Blackness is Hercules, although I don’t think Blackness can be identified as a single body. Technically, both Hercules and the Hydra were immortal. Hercules would cut the Hydra’s head but it remained alive. He had to hide it under a rock, in the hope it wouldn’t regenerate. We know the heroic part of the story, but I focused on this frightening ending—the threat of the regeneration of the State. This is where pessimism comes from. You can try to slay the beast but eventually it regenerates and adapts. It feels like we’re in a cycle where a new head-of-the-State monster emerges every 20 years. 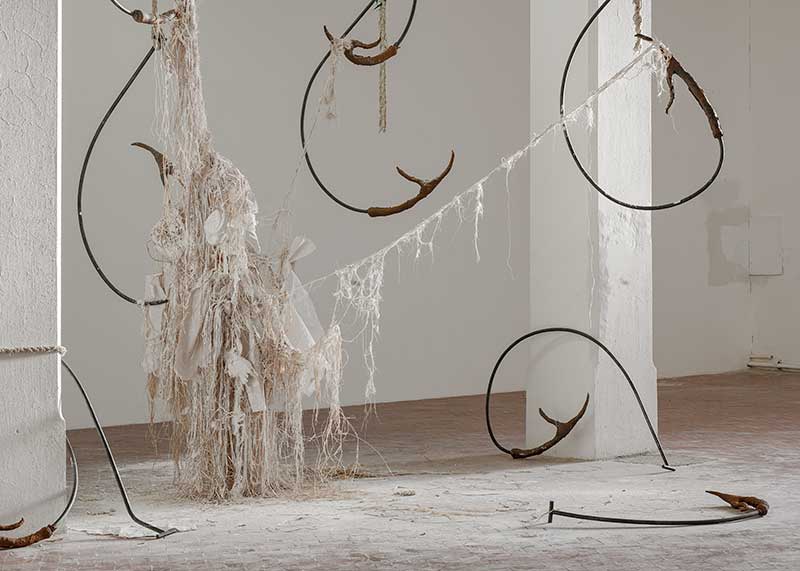 LL: In the materials you use and the way you work them, I can see destruction and ephemerality, but also inherent resistance. While you destroy and stress them, are you also testing yourself?

DW: Physical work for me unlocks the meaning of a lot of the theories I am focusing on, so I really need to be in contact with the materials. My sculptures are born of an exhaustion of material and a physical struggle with it. For the works in ‘Les Cendres du Shipwreck,’ I strained the materials: I soaked, burned and bent mahogany wood, I untied and reassembled the nets, to make them more fragile. It’s very laborious work. In order to recall the idea of a shipwreck, I use destroyed sails, mutilated anchors, iron harpoons, deflated nautical buoys, raffia, kaolin clay. Most of the materials I use hold a symbolic value. The iron comes from the ballasts that were used to keep the ship in balance, as there was so much human cargo on it. These rusty ballasts are the only element that points to the fact that a shipwrecked ship was used for slave trade. And mahogany was collected by slaves and traded as one of the most valuable woods, it was the symbol of richness. But it also became the symbol of liberation. When slaves were freed or freed temselves, they would acquire mohogany as a symbol of acquired freedom. But true liberation has never been achieved, so mahogany for me is the symbol of fake liberation. Mahogany is stubborn, very hard to bend… and sometimes it breaks.