Merike Estna warns me that her studio will be empty as she tours me through her recent survey show, ‘Soil will not contain our love’ (2022), at Kai Art Center, a first floor exhibition space in the rapidly gentrifying Noblessner district on the windy northern coast of Tallinn. ‘Everything is here,’ she emphasises gesturing to the childhood drawings adorning a sculptural work—an accordion-folded wooden screen with recent paintings on paper on its other side. The all-encompassing free-spiritedness of this approach is a common thread running through her practice, which starts with painting and branches out into custom-designed rugs, floor tiles, platforms and large installations made of stripped tree trunks and twigs. “These were made with the help of zoo animals,” she explains gesturing to the central structure in the largest room of the exhibition. “They ate the bark from the branches that I later used to make this fort.” Above our heads is a knot of intertwined branches bound together with nylon ropes and brightly coloured bands. ‘Nest’ (2022), referred to by Estna as a “human nest,” is an imaginary retreat, a whimsical portrayal of the architecture of survival. Though the sprawling show, with all its idiosyncratic objects, is by definition an installation, it feels more like a painting. The layering of planes and lines in playful but considered ways treats the three-dimensional space like a canvas and today, we are figures within it. 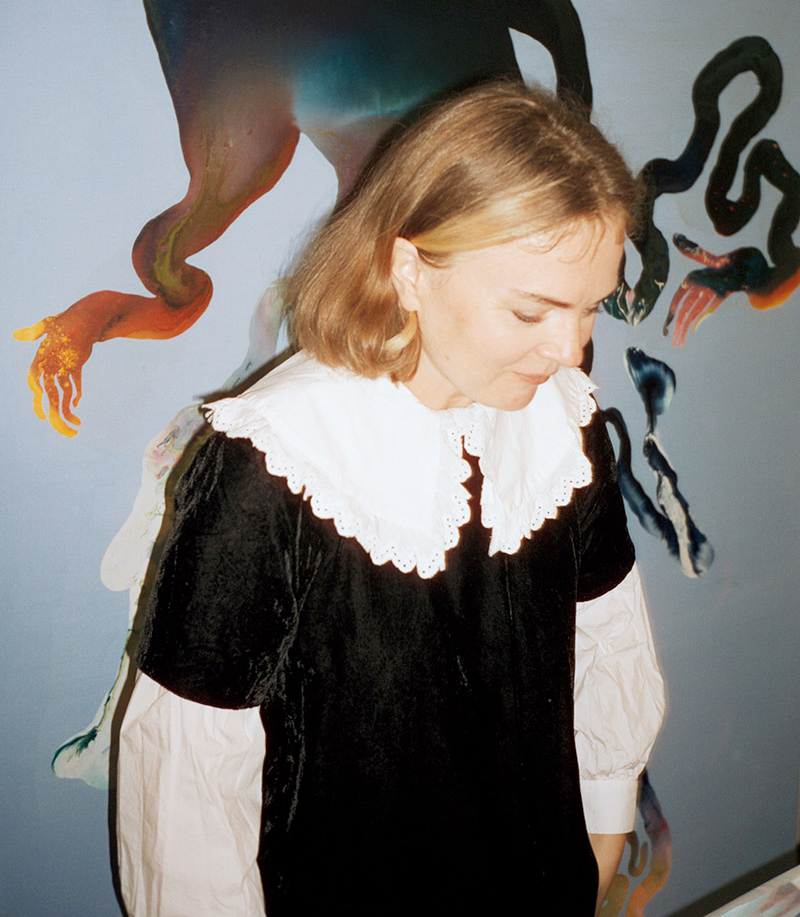 The primacy of painting in Estna’s practice is later confirmed by a visit to her studio, which is located in an unassuming four-storey building south of the historic Old Town. What looks like an office complex or a school is managed by the artist’s union, an advocacy body started during Soviet times but whose function has changed since the collapse of communism. Their latest goal is the institution of healthcare for freelance artists as well as exhibition fees. The property houses about 50 studios as well as a project space, workshops, community rooms and even communal galleries with stores where both artists and artisans sell their work. The hallways are painted different colours, with walls covered in posters for upcoming shows and original works installed in the stairwells. Estonia’s art market is not fully commercialised. Many artists sell directly from their studios or in spaces like the galleries on the ground floor of this complex. Olga Temnikova, who represents international Estonian artists like Estna and the now New-York-based Kris Lemsalu is one of two gallerists—the other being Kogo in Tartu— pushing to build commercial success abroad. This is no small task in a country with only about one-fifth of Berlin’s population. 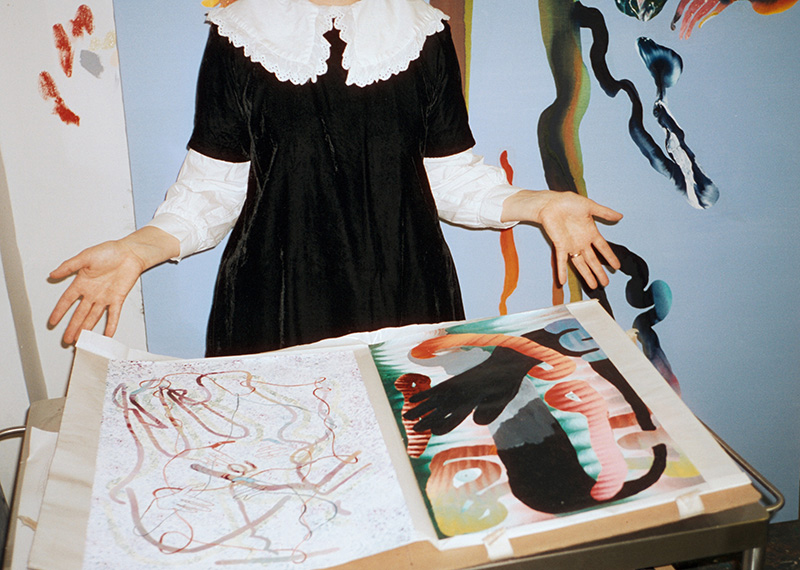 In Estna’s third-floor studio there are no signs of a sculptural approach and indeed, she admits to being, first and foremost, a painter. Three canvases lean against the right-hand wall while the floor on the left is covered in a mosaic of small paintings on plywood. On the walls and all over the floor are remnants of paint, traces of her process that she now finds somewhat distracting. Nevertheless, they are the only things that start to hint at an immersive, spatial approach. The happenstance frames left from painting off the sides of canvases form an idiosyncratic, syncopated rhythm. The rectangular forms endow this rhythm with structure while the colours and different brushstrokes add texture and depth. These traces seem to start on the wall then spread to the floor, onto a few carpet samples under a table and even incorporate other elements into their composition. A table upon which brushes are stashed in jars becomes another frame; a cable coiled on the ground echoes the winding threads and intestines the artist often uses as motifs in her paintings. One can see how the painting has left its surface to animate the room itself. 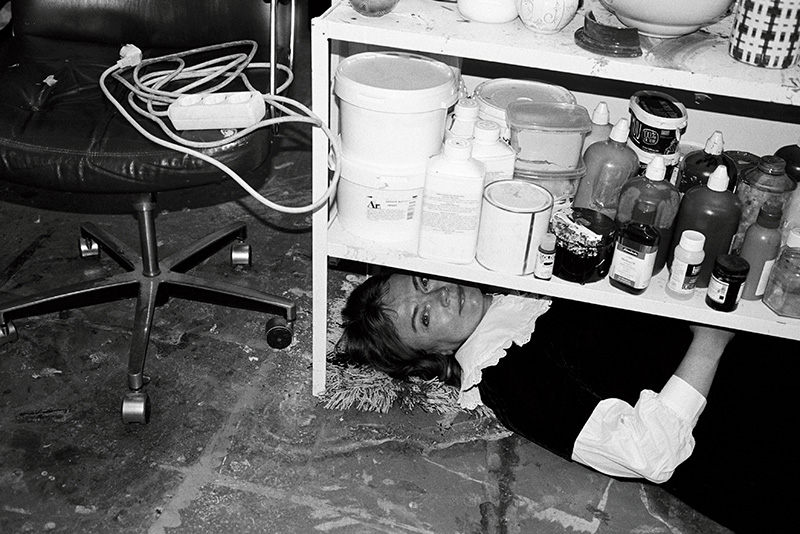 It was back in 2007, while a student at Goldsmith’s in London, that Estna started to get bored with applying marks to a two-dimensional surface and began to consider how to bring her process into lived space. How she did this took many forms. One of them was the performance and painting ‘Red Herring,’ first performed in 2017 in Copenhagen. The remnants of the New York iteration are shown at Kai Art Center in the form of a large documentary photo printed on vinyl as well as the painting itself. Dressed in a self-designed outfit that rendered her another pictorial element on her canvas, Estna sat on the nearly 3 x 5 metre work and invited the audience to join her for a drink. In what itself was a painterly gesture, she mixed green cocktails with dry ice causing white smoke to rush over the rim of the glasses and billow across the canvas like a renegade cloud. Another way she attempts to defy the two-dimensions of the canvas is to make painted platforms upon which people can sit or performances can take place. The table upon which she presents her catalogues at Kai Art Center has also been painted with her signature forms and textures. And though we cannot walk over the custom-designed carpets in the show, they too are intended to be used by their future owners. She tells me that there are two questions that are constants in her practice: how can one integrate painting into daily life, and how can one incorporate practices from daily life into painting so as to challenge the hierarchies ingrained within art? 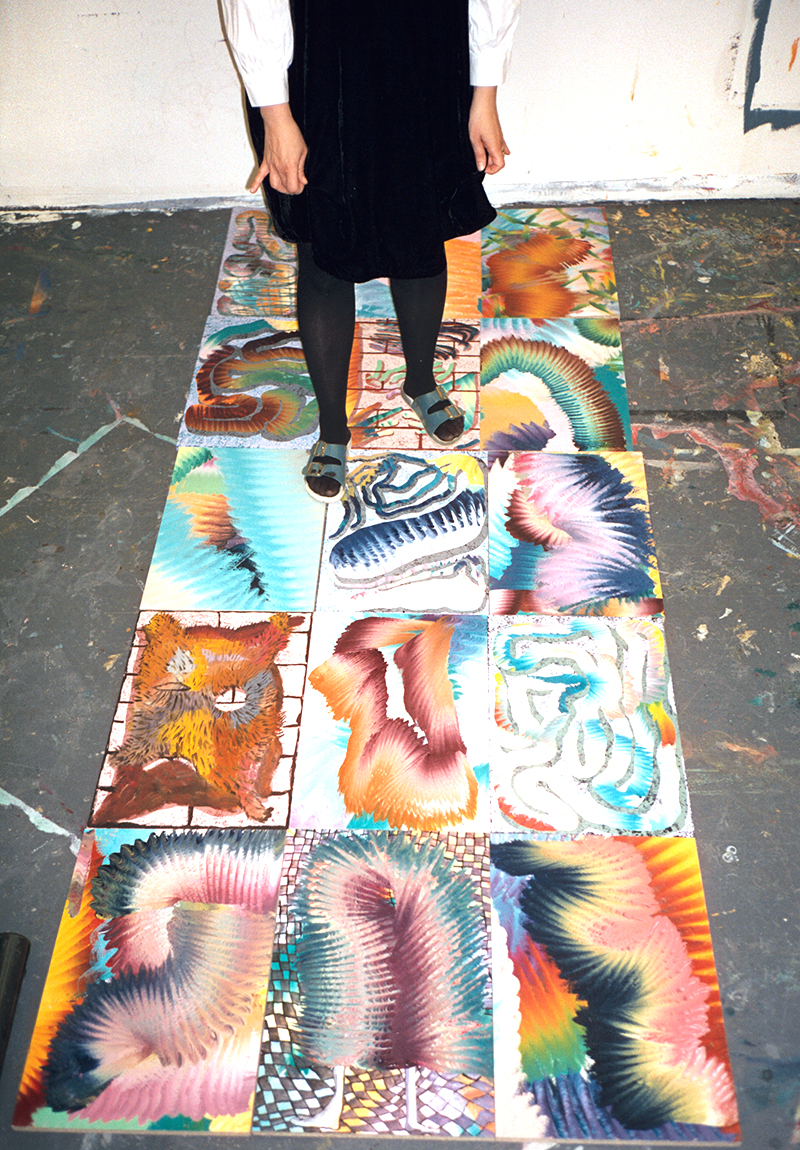 Vernacular forms are thus widely present in Estna’s visual vocabulary. Pastel pinks, blues and turquoises form her preferred colour palette though they also can be punctuated by loud psychedelic hues. Textures like fake marbling or the mottled effect of sponge painting often form the backgrounds for her intestinal lines or jellyfish tentacles. The atmosphere is a little 80s and early 90s though the artist, who was born in 1980, didn’t spend her childhood in this particular colour scheme. Estonia was part of the U.S.S.R. until its collapse in 1991 and the shades of the time were decidedly beige and grey. Her parents were both photographers hired by their municipality who would document parades, official events and other idealised representations of Soviet life. They were not, however, spared from some of the more grotesque realities of the system. Her father spent the first eight years of his life in Siberia, where he was deported with his mother and grandmother for no known reason, other than the regime’s desire to whittle down community and solidarity among occupied peoples. Though Estna did not experience these hardships first hand, what did leave a lasting mark from that time is a childhood sense of longing—for bananas, for example, which were unavailable, for different clothes, music, films, for a more colourful reality. This was the theme behind the large painting in ‘Red Herring.’ Its poetical but also autobiographical title, ‘kneeling banana/angel, flew over my head, on the 7th floor, above the seabed’ (2017), refers to her memories of her 7th floor apartment close to the beach in Tallinn, where she would look out and dream of “the world outside.” Now that the longed for, idealised western world has become reality, complete with its many flaws, this former yearning has manifested into the fantastical and freely playful. The islands of escape that are painted platforms or the tangled nest built for survival do not seem to be directly about longing but, echoing Susan Stewart’s “desire for desire,” a longing for longing itself. They are characterised by a nostalgia for the childhood moment where the imaginary was a real place and longing would linger in the sweetness of anticipation. 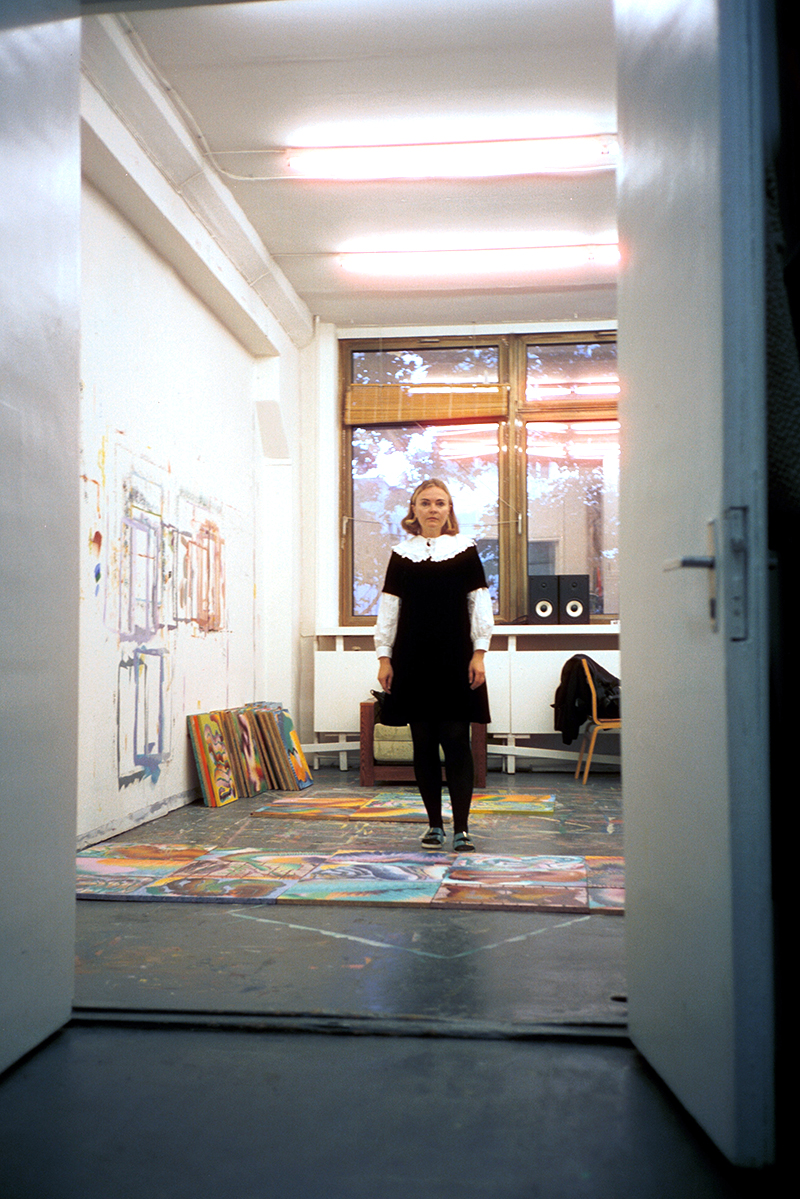 Since 2016 Estna divides her time between Tallinn and Mexico City. When asked if the new location has influenced her work, she answers pragmatically that her surroundings always affect what she does though she cannot point to a colour or form that stems from one place or another. Her work, it seems to me, might be compared to a raft, or to that painting upon which she sat and mixed alchemical concoctions for her guests. It is carried by the places to which she travels, but it retains its own solid structure. Not exactly a bubble, her practice sways with the ebbs and flows of life, but like her human nest hovering in the air above her exhibition at Kai Art Center, it builds a small safe haven amidst the turbulence of a constantly changing world.