Egill Sæbjörnsson, an Icelandic experiential artist, has lived in Berlin for the last 12 years. After studying Fine Art at the University of Paris – St.Denis (1995) and the Icelandic College of Arts and Crafts (1997), he began composing music and singing. A lot like much of his artwork came to be in coming years, his compositions were sweet and many times humorous, often ironic and yet more often with a clear philosophical intention. 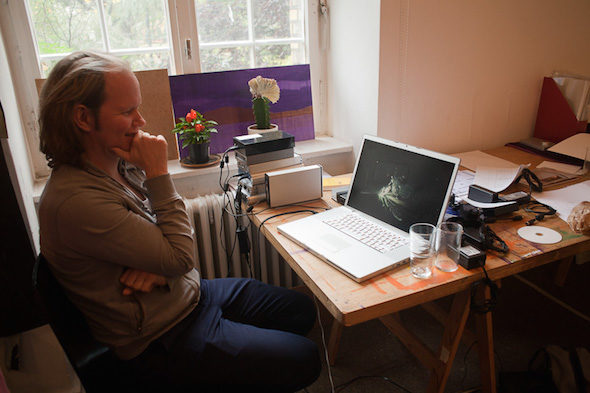 In 1999, he began using his drawing and painting education to create his own animated music videos, enhancing his creative reach along his music. Soon, he began integrating himself more and more into his pieces, often switching his likeness through extravagant characterizations and ambiguous voice intonations. A shift in his work mode began after these first interdisciplinary explorations, as it moved towards a place where the music – albeit impressively composed – slowly became secondary, and the animation/performance became an issue to be more carefully regarded.

Initially, Sæbjörnsson’s video installations/performances seem strangely simple. He uses common, accessible objects to stage settings that give a somewhat bland first impression, leaving the audience unsure of what could be developed from such a plain looking beginning. Slowly, but at a steady pace, the artist begins to layer projections of light, animations and sound onto these simple objects, along with varying sound and rhythms in ludicrous movements, turning these objects into subjects (if not characters) that sometimes appear unexpectedly alive, creating a completely new, emotional environment in which complex mentalscapes are allowed to be projected (literally). Along with the transformation of these objects, the viewer is drawn as well into a realm of variable space/time, eagerly wondering where will the artist take it next, as he creates worlds where ordinary, tangible objects interact, and can be choreographed (as in ‘Original Handbags’) or suddenly take off in flight. All kinds of hilarity can follow, in a world where the absurd is around every corner; within this playful ambience, action inevitably grabs the viewer’s attention as the piece develops, suddenly revealing deeper implications that leave us with a variety of ensuing thoughts on how easy Egill makes it seem to bend the rigid frontiers of our emotional, philosophical and even political interpretations of our immediate surroundings.

“He is an artist that cannot be fitted into a single drawer: Egill Sæbjörnsson, who could just as well have chosen to become a musician, facilitates all medias for his art productions from photography to performance, from video installations to short films. He likes to experiment and constantly tries working with new formats: After a promising debut as an musician – working with the same label as Björk in Iceland – Egill decided to go give himself to the making of videos in which he would sometimes appear himself as well. The in Reykjavik born (1972) artist often uses objects found at the flea market for his simple special effects in the videos. To understand his art better one could call him the George Melies of the Modern Age.

The works of Egill Sæbjörnsson are an unusual mixture of Music, Sound, Video and installation. The fundamental subject to his work is the question of how different layers of understandings construct the reality and they have a strong connection with the absurd. His skills to work within different medias seems to come to him remarkably easily. For some he is mostly an installation and performance artist but to others his writing and music is more important.” – Arte Tv Documentary