I started my weekend tour on Friday night, heading to the first stop on my Gallery Weekend agenda, ACUD Macht Neu, for the opening reception and afterparty of ‘Variations On Time’, featuring performances by Marlene Stark, mobilegirl, La Timpa and GIL. Located across from Volkspark am Weinberg, the space is more than a gallery: part studio, part club, ACUD is an art collective that combines visual arts with music and performance.

When I arrived, just before midnight, the space was already crawling with people, crowds gathering in the venue’s courtyard and club areas. The gallery space itself, divided into two small rooms, features new works alluding to space and time, by Canadian, Paris-based artist Kapwani Kiwanga and German artist Susanne M. Winterling. 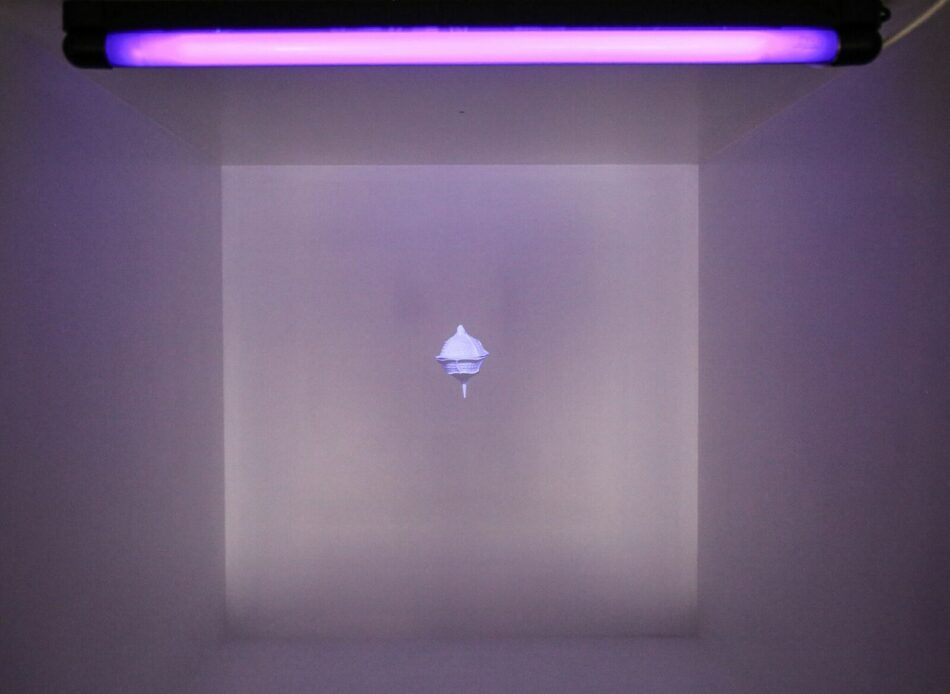 The gallery’s walls are hung with folded photographs by Kiwanga, referring to Pangea and a time that predates the separation of the Earth’s continents, a world in which we would all be connected. Winterling’s environmental and political work deals with relationships between humans, animals and matter. Winterling’s practice is heavily research-based and in these new works she focuses on microscopic marine organisms called dinoflagellates. These organisms, neither plant nor animal, create a blue glow in the water when triggered by movement or touch. Here, Winterling enlarges one of these tiny organisms, suspended in a blue and purple-hued cube. The artist urges me to listen closely, though the low-pitched throbbing sound emitting from the work is nearly drowned out completely by the live performances next door. I leave just after La Timpa’s broody atmospheric set so I can get my rest before the busy day ahead.

My next stop came on a sunny Saturday morning, as I headed to KOW gallery to see the exhibition ‘El Otro, El Mismo / The Other, The Same’ by Cuban artist collective Los Carpinteros. Los Carpinteros have been operating since the early ’90s, creating art that documents changes in contemporary Cuban society. The exhibition at KOW—the collective’s first solo exhibition in Germany— combines sculpture, three films and new watercolor paintings by the collective.

As I entered KOW, which combines indoor and outdoor space, I was confronted by one of the collective’s major sculpture works. The sculpture, ‘Celosia Marroqui’ (2018), made from Moroccan-made clay, makes literal the collectives name “The Carpenters”, alluding to this focus on construction that has come to define their oeuvre. 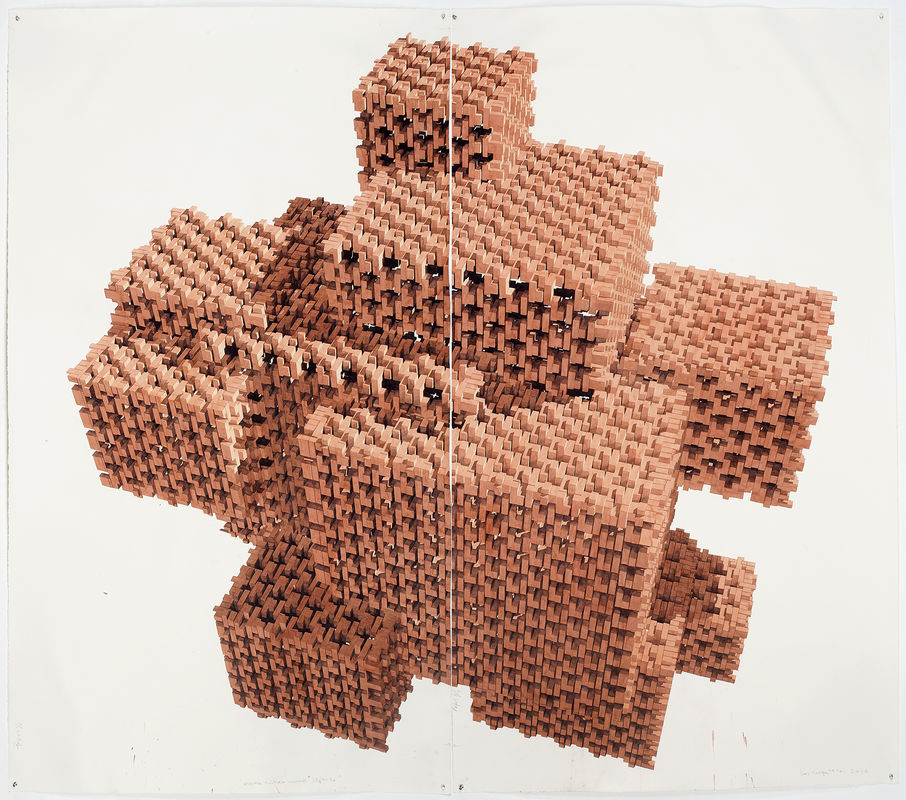 Ceiba I, 2018 © Los Carpinteros, Courtesy the artists and KOW, Berlin

Contrasting with the bright and open upper levels of the gallery, the basement was dark, a sign warning of explicit content as I head down the gallery’s stairs. Film works such as ‘Retráctil’ (2018) and ‘Comodato’ (2018), shown in the gallery’s lower level, differ drastically from the works above, with a common sense of foreboding and Hitchcockian suspense. These are some of my favourite works.

My next stop on my tour was Galerie Neu, a short walk away from KOW, to see new works by Norwegian-German artist Yngve Holen. Holen, who has several works in the latest iteration of the Boros Collection, is presenting his second solo exhibition at Galerie Neu. In this new exhibition, he has taken the rims of various sports utility vehicles and 3D scanned them, rescaling the rims to a diameter of two meters and rendering them in cross-laminated timber. 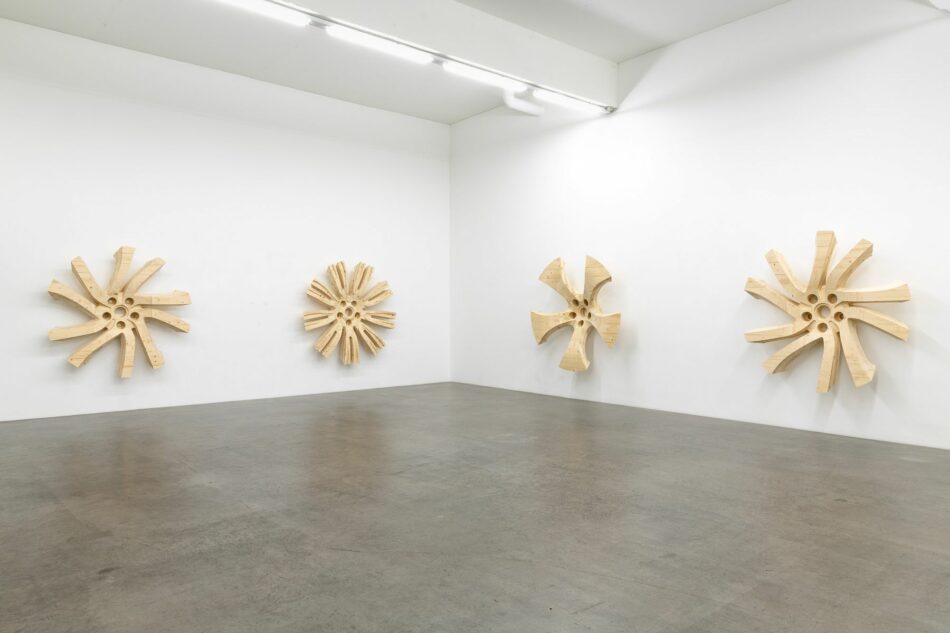 Holen’s choice to render these rims, typically made from aluminum, in timber could be seen as a commentary on conversations about sustainability, reduction of emissions and green transportation. These new works also continue Holen’s fascination with the eroticisation of machinery, featuring the ‘openings’ so often found within his work.

My final stop of the day was Sprüth Magers, which is hosting three new exhibitions featuring new bodies of work by artists Senga Nengudi, Kara Walker and Andro Wekua. As I approached the gallery from the street it is clear that it is also my busiest stop of the weekend, with crowds gathered outside the space. The inside of the gallery is no different, buzzing with activity between the three exhibition spaces. At the center of the Andro Wekua exhibition is an androgynous sculpture created from nickel silver, a combination of a silver-like alloy of copper, nickel and zinc. The figure stands in a pool of water, as water pours from its arms and shoulders into the pool. 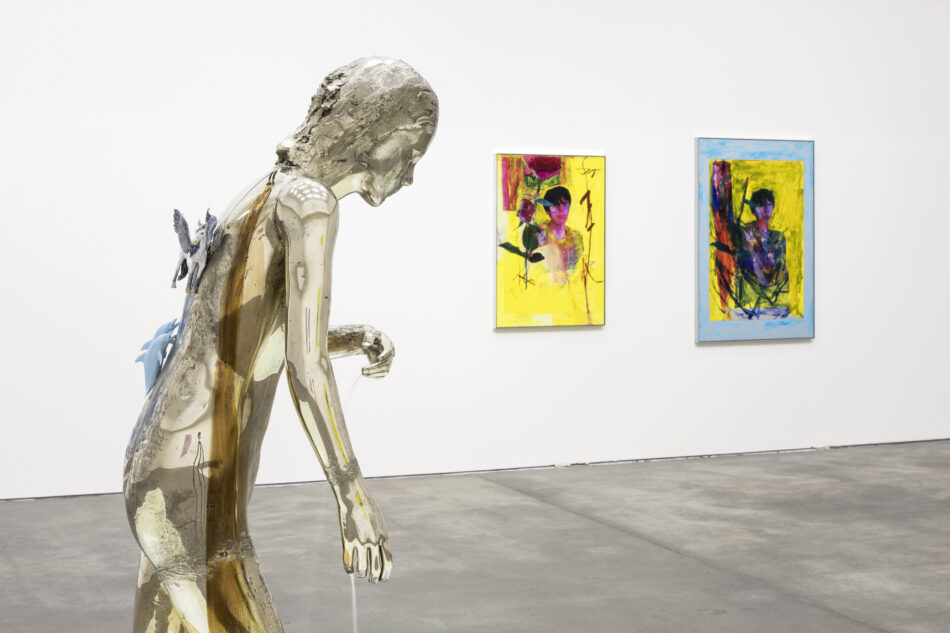 In ‘Fall Frum Grace, Miss Pipi’s Blue Tale’ (2011), Kara Walker presents a seventeen-minute video telling the tale of Miss Pipi, a southern belle who has a sexual affair with a black man, a slave. When their affair is revealed, the man is beaten and brutally murdered by a group of white men. Walker uses shadow puppetry and silhouette against simple backgrounds to tell the story. Here, Walker mediates on racism and cultural fears in the American South in the nineteenth-century, though parallels extending into the following two centuries can no doubt be made.

Senga Nengudi, a member of the African American avant-garde in Los Angeles and New York between the 1970s and 1980s, combines sculpture with performance and photography in her artistic practice. The exhibition of her work features four sculptures, which the artist started in the late 1970s. The sculptures made from nylon stockings, among other materials, stretch across the gallery’s walls. Photographs on display document performances by the artist and dancers incorporating Nengudi’s sculptural works, oftentimes wearing them like costumes.

Though navigating around crowds of people may perhaps not be the ideal way to view works of art, there was an undeniable excitement and buzz across the various galleries I visited this weekend. Nevertheless, I still may have to pay another visit to the galleries next week.