Jaybo Monk, a French-born painter, has lived and worked in Berlin since 1985. In this time, he has created such various influential urban subculture projects as the streetwear label ‘Irie Daily’ and the cultural magazine ‘Style and the Family Tunes’. In addition to his upcoming show, ‘Hazardous Brushstrokes’ at Circle Culture Gallery (Sept. 30), Monk has most recently exhibited his abstract figurative art style in the Avant Garden Gallery (Milano) and a solo exhibition in Stolen Space Gallery (London). 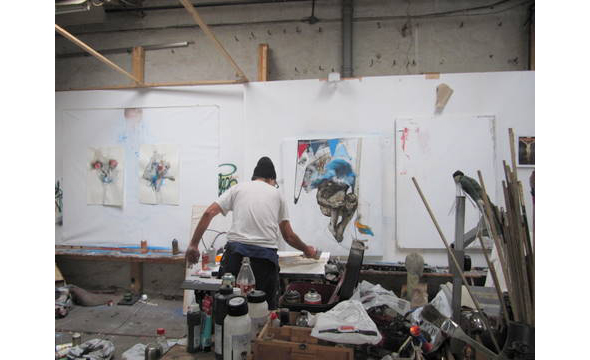 “Jaybo Monk is a runaway, setting out and wandering along in a physical as well as in a creative sense. In his youth, he ran away from his house in southern France, settling in Berlin-Kreuzberg at the beginning of the 1980’s, where he busied himself as a graffiti writer, street actor and hip-hop musician. When he founded the streetwear label ‘Irie Daily’ and the cultural magazine ‘Style and the Family Tunes’ at the beginning of the 1990’s, his influence on Berlin’s youth culture and fashion scene could be clearly seen. Even today, urban subculture is the driving force behind his artistic activities.

This is especially true of his paintings, are erratic and chaotic as they directly quote various fragments of urban subculture. They often plumb great psychological depths, thematically speaking, with lightness meeting existentialistic melancholy, aggressiveness meeting passion and a seemingly standard romantic streak and visionary dimension. 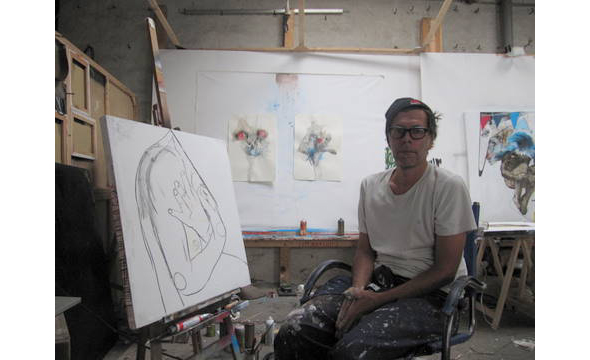 While viewing some of Jaybo’s paintings, brushstrokes and figure characterizations are vaguely suggestive of Francis Bacon, the influence of Asian art can be seen, or slivers of the world of Walt Disney make an appearance – like his projection on the Berlin Cathedral, transformed into a veritable tidal wave of Mickey-Mouse hands. Jaybo himself characterizes these sorts of stylistic quotes as “visual reflexes, designed to involve the observer by using their high level of familiarity with the elements interacting within the picture. It rests with the public to create meaning behind the artwork by allowing these imaginations to play out and by superimposing the pictures with their own experiences (that of childhood, for example).”.