Art professionals, curators, collectors and enthusiasts gathered this past week in sunny (but surprisingly cool) Miami for several art fairs held between the 1st and the 5th of December. The central event of this art invasion to an already cultural city was Art Basel Miami. As the little sister of Art Basel, the largest art fair in North America, showcasing the 20th and 21st century artworks of over 2,000 artists.

Of the 250 international galleries at the fair, Berlin was one of the top represented cities, only second to New York. The European attendance was strong at the fair with over half of the countries who turned up in Miami located in the union across the pond. Thirty of the forty German galleries presented were based in Berlin, including Arndt, Johann König, and Galerie Luis Campaña. 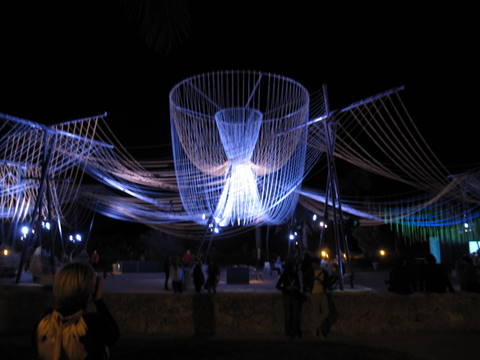 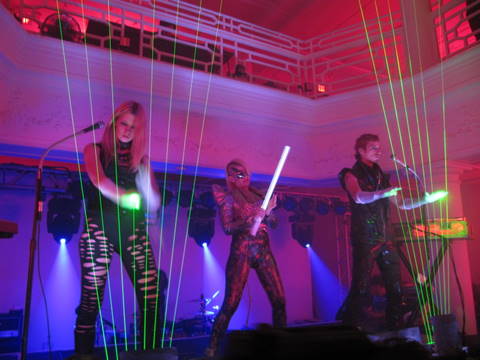 Berlin favorite, the Broken Hearts Club, brought the city’s legendary nightlife scene to Miami. Rivaling Le Baron’s Parisian annual pop-up nightclub, BHC presented a live DJ set one night at Oceanfront Nights and two nights of invite-only events at Townhouse Hotel Miami. Another highlight was the surprise Berlin-based Peaches Laser Show at the Bally Love event in the Moore Building. She quickly stirred things up in her usual avant-garde performance style. Dressed in her trademark fashion-forward attire and alongside her sexy band, Sweet Machine, the foursome energetically provoked the intimate crowd into a mini-sea of bobbing, dancing heads.

Away from the busy South Beach and Wynwood District art clusters in Miami, NADA (New Art Dealers Association) satellite fair was well worth the commute. Situated in the ocean-view conference rooms of the luxurious Deauville Beach Resort, viewers had no problem ignoring the luscious white sands and blue skies for the engaging art presented. A favored Berlin gallery was, whose exhibition was organized by two up and coming curators, Jordan Nasser and Elisa Freudenreich.

The fusion of western and eastern galleries was present in the showcasing of Scope Art Fair and Art Asia in the same pavilion divided only by a wall of graffiti-style art. Whether beginning from the left side (Art Asia) or the right side (Scope), the viewers enjoyed a variable selection of artworks.  However this contrast of east and west remained surprisingly coherent and unmuddled as many similar themes and styles were noticeably present in both fairs. Moreover, Scope was not exclusively a western art fair, as the works from several eastern artists as well as eastern Galleries were presented.

Of all the fair locations, it was Aqua’s unique layout in the Art Deco motel of the same name that highlighted the unique direction of the artists and artworks in attendance. The galleries presented replaced the antiseptic whitewalls habitually used in the art world with a more domestic motif accentuated by the presence of retro style motel-room furniture, bathrooms, and windows. 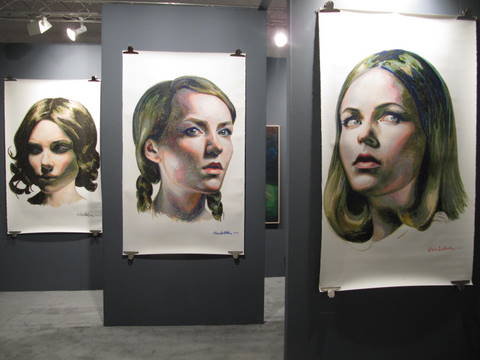 From the telling sea of red dots proudly exhibited alongside the art, it was apparent that the more seasoned collectors came with a mission to buy and would be competing with other enthusiastic young buyers looking to take advantage of the upturning economy. As the year draws to a close and with each coming art fair, it is noticeable that there is a stronger presence of the Berlin scene. This is especially true when discussing emerging artists, whose attendance at each international fair is more impressive each time.