Jane Hughes constructs powerfully evocative compositions that layer photography, sculpture, video, and installation to re-present cultural and historic imprints left behind in derelict, abandoned spaces. Investigating the identity of place, Hughes’ artwork addresses the cumulative effects of neglect, nostalgia and the implications of memory; enmeshing characteristics of voided urban environments and rural landscapes upon one another. Over the last two years, Hughes has created three separate series called Attachments, which include works inspired by the settings of vacant Berlin structures to the uncharted Finnish countryside and sprawling Icelandic landscape. 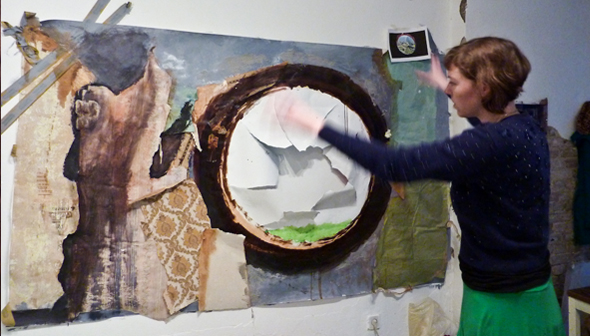 Born and raised in Ireland, the artist moved to Berlin in 2006, after graduating from National College of Art and Design in Dublin. Coming out of a strict background in painting, early on Hughes rejected traditionalist conventions and approached her medium through a deconstructive framework. As stated by the artist, “I am interested in the alternative use of spaces and materials in a manner which does not obey traditional parameters, but rather allows for experimentation, innovation, errors, deliberate chaos, and the rejection of uniformity.”

Hughes’ artistic approach includes multiple processes that overlap to create a framework through which materials, visual elements, and physical structures merge into a language of their own. Although her artwork distinctly diverges from the canvas, strong painterly qualities resonate through her compositional arrangements, dynamic edges and bleeding hues layered through each collage. Often starting off with photographic documentation of selected sites, Hughes breaks out of the frame by juxtaposing print and projected visual imagery against contrasting material textures and physical artifacts extracted from the site. Appropriation of scrap wallpaper, plastered boards, and otherwise discarded remnants, repurposes such waste material, addressing strategies of re-use and reinvention. 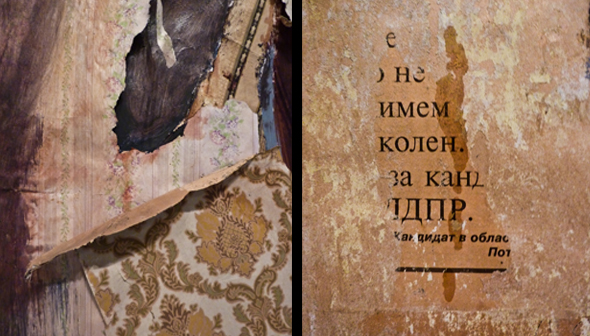 Elements from the separate locations also resurface through different mediums as Hughes weaves together her experiences drawn from each site. During a workshop at the Kilpisjärvi Biological Station in 2010 in North Finland, the artist assembled a temporary structure from discarded waste and natural materials found in a pond on the Finnish–Norwegian border. As Hughes describes, the site was “hidden away off the main highway between Norway and Finland amidst astonishing picturesque snowy landscapes there was a pond that had been used as a secret dumping ground, for an old freezer, barrels, carpets, plastic and anything else you can think of.” She then captured the ephemeral, atmospheric qualities of the installation through video, as water and reflected light moved through the in situ artwork. Later employed as a projection for another site-specific installation, the video took on new meaning, which referenced the shared qualities between these locations demarcated by similar conditions.

In addition to her solo works, Hughes has also collaborated on a number of projects that question the idea of community through exploring social interaction between people and with their environments. In 2010 with artist, Gretta Louw, Halbtisch, a public art project was installed at the Reisschale Asian Foodstore in Berlin. Serving as a platform to bring strangers together – one dining inside the storefront window, and the other on the street – the work delivered a performative series of interactions. In each scenario the diners could only communicate through drawing or writing on the storefront window, leaving a recorded imprint of the experience once the dinner ended. 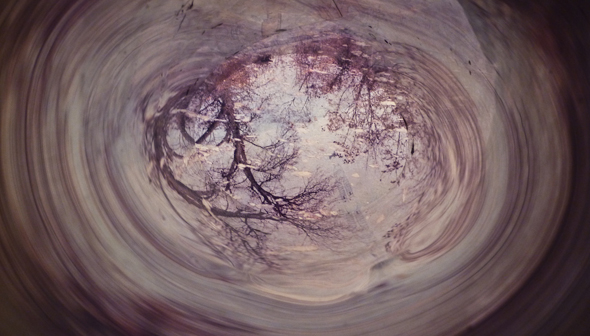 Jane Hughes is currently studying at the Institute of Art in Context, Universität der Künste on a semester exchange, and in 2011 will graduate with her M.A. in Environmental Art, from The Aalto University School of Art and Design in Helsinki, Finland. She also is co-curator of the art project space Werkstadt e.V. in Neukölln, Berlin and runs Art Clinic, an ongoing monthly series of artist talks.