Here are some artwork highlights I’ve come across during my most recent travels to London. Included are works from The Saatchi Gallery, The Serpentine Gallery, Tate Modern, Whitechapel Gallery, and the Zabludowicz Collection. 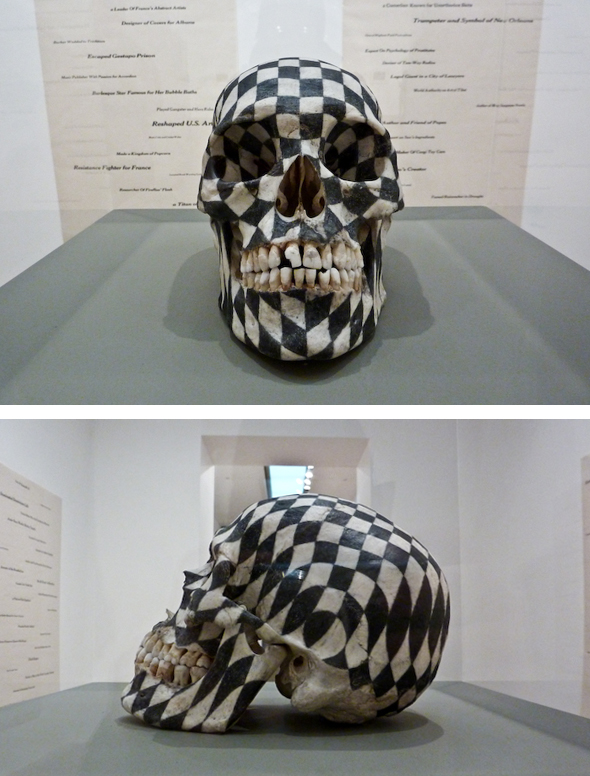 From www.tate.org.uk: Sunflower Seeds is made up of millions of small works, each apparently identical, but actually unique. However realistic they may seem, these life-sized sunflower seed husks are in fact intricately hand-crafted in porcelain.

Each seed has been individually sculpted and painted by specialists working in small-scale workshops in the Chinese city of Jingdezhen. Far from being industrially produced, they are the effort of hundreds of skilled hands. Poured into the interior of the Turbine Hall’s vast industrial space, the 100 million seeds form a seemingly infinite landscape.

Porcelain is almost synonymous with China and, to make this work, Ai Weiwei has manipulated traditional methods of crafting what has historically been one of China’s most prized exports. Sunflower Seeds invites us to look more closely at the ‘Made in China’ phenomenon and the geo-politics of cultural and economic exchange today.

Update: Friday, October 22, 2010
The landscape of sunflower seeds can be looked upon from the Turbine Hall bridge, or viewed at close-range in the east end of the Turbine Hall on Level 1. It is no longer possible to walk on the surface of the work, but visitors can walk close to the edges of the sunflower seed landscape on the west and north sides.

Although porcelain is very robust, we have been advised that the interaction of visitors with the sculpture can cause dust which could be damaging to health following repeated inhalation over a long period of time. In consequence, Tate, in consultation with the artist, has decided not to allow members of the public to walk across the sculpture.

Sunflower Seeds is a total work made up of millions of individual pieces which together from a single unique surface. In order to maintain and preserve the landscape as a whole, Tate asks visitors not to touch or remove the sunflower seeds.

Juliet Bingham, Curator, Tate Modern:
“Ai Weiwei’s Unilever Series commission, Sunflower Seeds, is a beautiful, poignant and thought-provoking sculpture. The thinking behind the work lies in far more than just the idea of walking on it. The precious nature of the material, the effort of production and the narrative and personal content create a powerful commentary on the human condition. Sunflower Seeds is a vast sculpture that visitors can contemplate at close range on Level 1 or look upon from the Turbine Hall bridge above. Each piece is a part of the whole, a commentary on the relationship between the individual and the masses. The work continues to pose challenging questions: What does it mean to be an individual in today’s society? Are we insignificant or powerless unless we act together? What do our increasing desires, materialism and number mean for society, the environment and the future?” 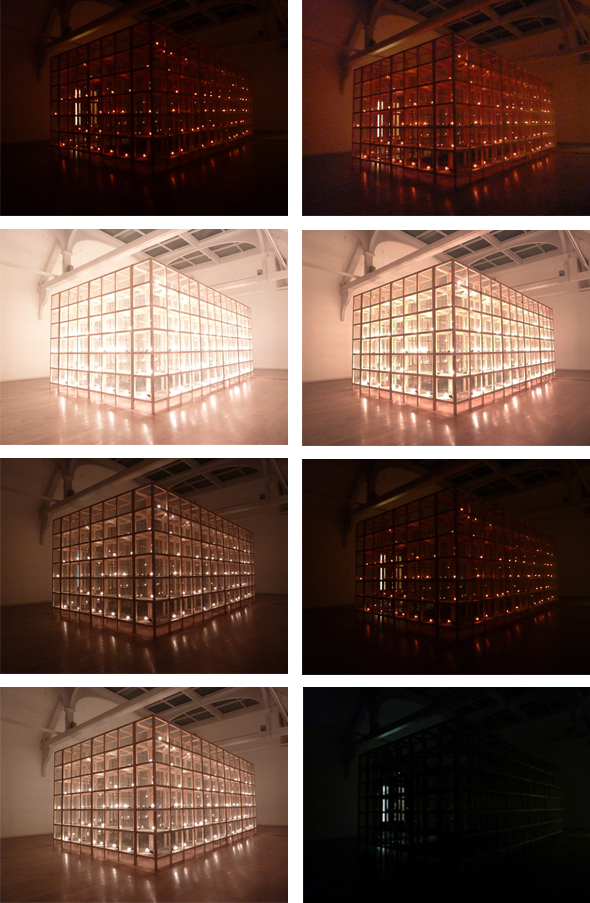 From www.whitechapelgallery.org: Current Disturbance is a room-filling environment made from stacked wire cages, light bulbs and the amplified sound of electric currents. As the bulbs light up and fade out at irregular intervals, they sporadically illuminate the surrounding room and the unruly mass of wiring covering the floor.

This installation by renowned British-Palestinian artist Mona Hatoum, whose ambitious work in sculpture and video is rooted in her early performances, emanates a pervasive sense of threat as much as it generates an alluring spectacle. Referencing both the human body and rigid systems of abstraction, it combines sound and vision to create a highly charged experience.

The third in a series of four displays from the D. Daskalopoulos Collection, Greece, gives a chance to see this extraordinary artwork for the first time in London. Keeping it Real is part of the Gallery’s ongoing programme of opening up important public and private collections for everyone. 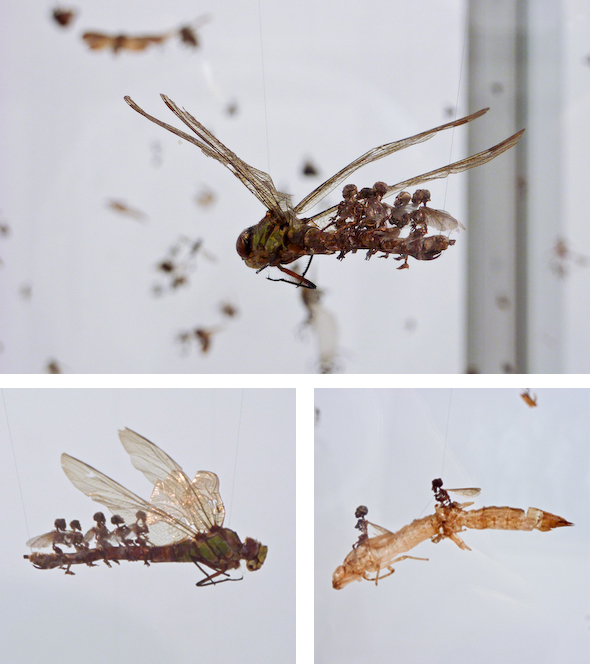 From www.saatchi-gallery.co.uk: Made from desiccated insect remains, dried plant roots, and other organic ephemera, Tessa Farmer’s tiny sculptures give a glimpse into the world of fairies. No story book land of Tinkerbells, Farmer’s Swarm envisions the purveyors of mischief and magic as an actual species, as animalistic and Darwinian as any other. Exchanging Victorian romanticism for the darker pragmatism of science, Farmer evidences her specimens as fearsome skeletal fiends, plausible “hell’s angels” of a microscopic apocalypse. Posed in dramatic battle formations, Farmer’s menagerie wages war against garden variety pests; each figure, painstakingly hand crafted and adorned with real insect wings, stands less than 1 cm tall.

From www.saatchi-gallery.co.uk: Christian Dior – J’Adore (Mountain Goat) and Jean Paul Gaultier – Classique (Arctic Fox) are two of a series of three works. “All three involved copying the form of figurative perfume bottles. I liked that they were a dual image: on one hand it’s a bottle, on the other it’s a figure. I saw the taxidermy and the concrete bottle as two figures melding into each other, and also as two objects overlapping. Taxidermy is as much of an object as a coffee cup or any other thing. But they were white and there’s an idea of purity involved, and when you see the fur matted and embedded in concrete it’s quite jarring.”

From www.saatchi-gallery.co.uk: Richard Wilson’s 20:50 is truly a contemporary masterpiece. The work is the only permanent installation at the Saatchi Gallery and has been continuously shown in each of the gallery’s venues since 1991. Currently on display in Gallery 13 – a room custom built for the piece – 20:50 transforms the gallery into a site of epic illusion.

Viewed from the entrance platform 20:50 appears as a holographic field: simultaneously a polished floor, infinite clear pool, an expansive and indefinable virtual space that clinically absorbs and mirrors the gallery architecture. The room is in fact entirely flooded in oil.

Visitors are invited to examine the piece close-up via a walkway that extends into the lake, placing the viewer, waist deep, at the centre of a perfect mathematically symmetrical scope. Through this altered perspective 20:50’s phantasmical aura is enhanced, amplifying the disorientating and mesmerising experience of the space, and further confounding physical logic.

20:50 takes its name from the type of recycled engine oil used. It is thick, pitch black, and absolutely indelible: please take extreme care with your clothing and belongings, and no matter how tempting, please do not touch. 20:50 often has to be demonstrated to be believed: the liquid can be seen by blowing very gently on the surface. 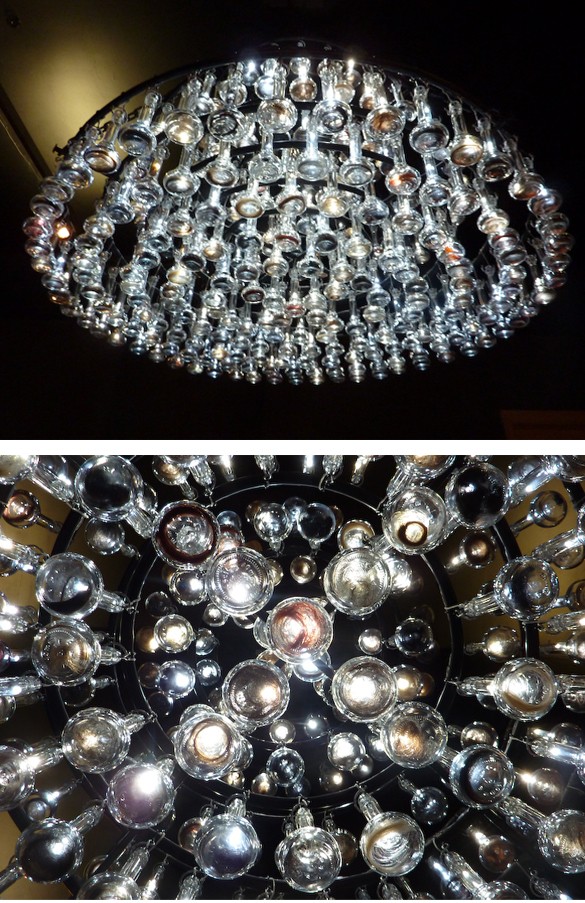 From the Future Map website: A chandelier is an exuberant light. It mediates a fantasy through its extravagant decorative illumination. In modern history, the light source for the chandelier has changed from candles to electrical light. It has been a symbol of wealth, vanity, and extravagant power.

The chandelier once housed in the Cathedral was transferred to the bourgeoisie home along with its powerful hierarchical associations from 15th century, distinguishing status, a signal light marking boundaries between the ruling class and the common people. The light epitomizes the capitalistic society, placed up high on the ceiling in a gorgeous marbled surveying, like a protector and observer.

‘Chandelier; Hair Filament’ attempts to expose the capitalistic structures we are entangled within by re-presenting this power indicating light. Inside the glass bottles in place of candles and electrical light, there is human hair. Human hair is the only easily removal part of body. In many cultural traditions hair is a contentious and powerful issue. The Japanese cut Koreans’ hair as part of its colonial program, Jewish women wear wigs to hide their hair. Hair seems to have some powerful significance. Hair symbolises individuals collected and contained with in the bottles. These hair filled bottles are hung together making a chain and constructed in tiers the shape of a Pyramid. This structure suggests the way in which the capitalistic system, collects, contains, and exploits individuals, the working class, and the Third World people. This re-presenting of capitalistic structure encapsulated by the chandelier like capitalism is seductively beautiful. However, the dark underbelly is that capitalism takes over individuals and emits light through them.