It smells raw in the room.

Taking in the entirety of James Franco’s Berlin exhibition of The Dangerous Book Four Boys at Peres Projects is a challenge, but there is a haptic, material quality to the show that acts as a connective thread and stands out much more here than it did last year in New York, where it debuted at the Clocktower Gallery in June 2010. Even the photographs are implicitly odorous, evoking melted plastic, charred wood and gunpowder. The rawness of the untreated plywood installations and bases, the torn and marked book pages, the unsaturated colors of the films and photographs, even the scattered found and manipulated objects, establishes the show as an alternative world with a different kind of voice. 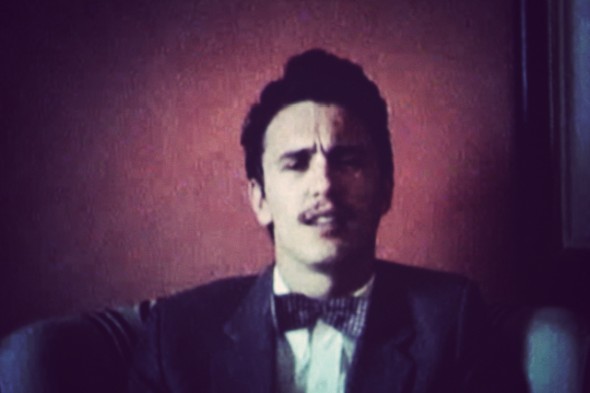 The variety of media used in this show poses a larger inquiry into the validity of artistic representation between different works. He takes on common images of the familial, in particular those that are introduced to children in the western world early-on, and transforms them into questions about domesticity and the gender roles that one is expected to play. He melts a traditional children’s playhouse, here exhibited separately from the photograph of that same object, deformed and stranded in a natural landscape. He films a sequence of shooting of an oil painting with a rifle followed by a child’s lunchbox and a lengthy array of other material objects, creating peepholes through once impenetrable things. The creative and the destructive act – shooting film or a gun – are inseparable. And while certain themes of alternative sexuality, destruction and adolescent male identity are explicit models used throughout the exhibition, Franco’s artistic methods and language purport a breakdown of these as oversimplified cultural signifiers in order to create a very different kind of figure. 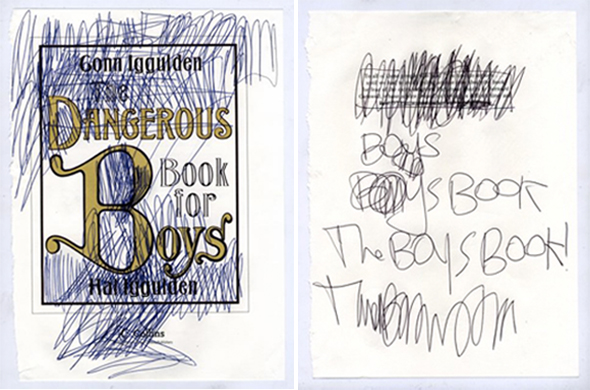 The text that inspired the title and theme of the show, The Dangerous Book for Boys by Conn and Hal Iggulden, may initially establish the show’s work as male, but Franco’s The Dangerous Book Four Boys creates a multiplicity of personas that questions the social construction of sex and gender roles. In films like Masculinity & Me and Dicknose in Paris, Franco abstracts and disfigures the male characters through a variety of masks, prosthetics and scene crops. Expectations about sexuality and sexual expression are confronted with bodily reversals, where a penis and a nose collide and an unrecognizable man wearing a mutilated mask evokes a vagina with every attempt he makes to open both mouths. Even the group of silent films is positioned in such a way that bodily normalcy is contradicted. We’re so accustomed to the traditional face-off with the television screen, that having them surround the room at crotch-height is physically jarring. And while the majority of these silent films are speaking to each other in sets of two or three, one is left alone. 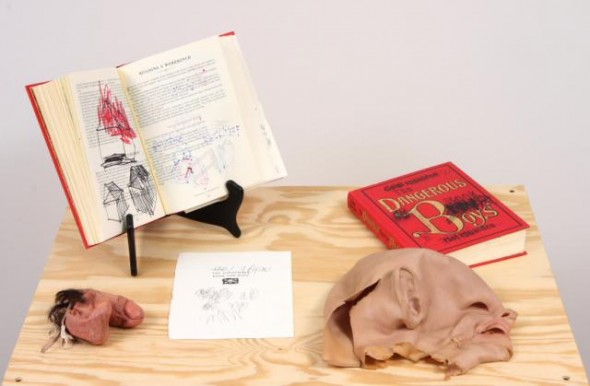 The Feast of Steven is starkly different than the other pieces in The Dangerous Book Four Boys, but it is easily one of the more climactic pieces in the exhibition. While Steven embodies an adolescent male struggle, his merging of reality and fantasy allows for a contrary point-of-view. The film is a window into how acts of cruelty, profound violence, and rape can be conquered and transcended into beauty, tenderness and ecstasy.

In the end, I enjoyed being in James Franco’s distorted world, and the dividing of the show between two different sites in the city created a completely new experience for reading the work. His critique on the authority of established cultural norms raises enormous questions. I hope he will keep asking them in the future.