No stranger to the limelight, Ultra Violet (born Isabelle Collin Dufresne) has been an active part of the New York art scene since her days as the pupil turned muse of Salvador Dali. Originally from France, she ventured to New York at a young age in hopes of expanding her art education and to escape her strict religious upbringing. 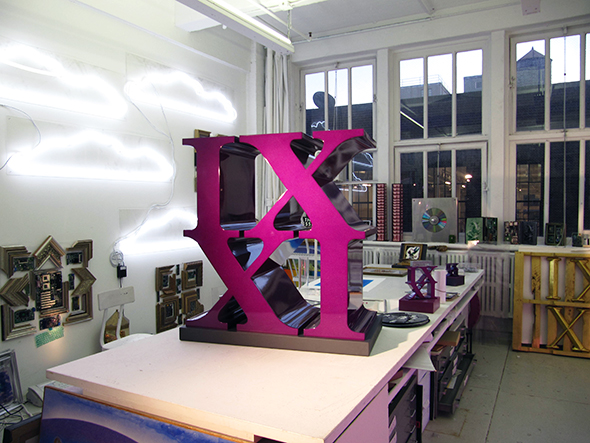 During that time she became Ultra Violet the superstar an important part of the Andy Warhol Factory. She was a central character in many of Warhol’s film-projects and a staple in the legendary NYC nightlife. Her work at this time often incorporated her own body, exploring the connections between the artist, the work, and the viewer.

After making her escape from the Factory scene, which for many had become increasingly depraved and dangerous, Ultra Violet returned to art with renewed spiritual fervor. During her time away she had written her memoirs (published as ‘Famous for Fifteen Minutes, My Years with Andy Warhol’ in 1988) and focused on her own art practice. Her new work seemed to strive for a balance between high and low elements, religious grandeur with pop tackiness. Returning to France she saw God in the beauty of nature, in the clear bright skies of the Mediterranean Cote d’Azur. 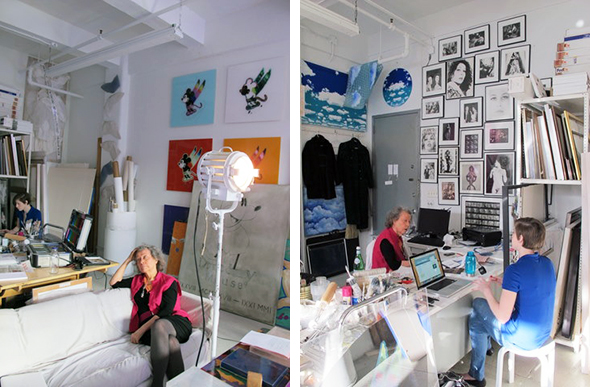 Seemingly from this world of brightness comes her preoccupation with airy luminescent clouds, for example, in ‘Give Me Some Light’ (2008). There is a literal lightness to her work, as she infuses the viewers optical field with bright and colorful washes of light. The message lies somewhere between her visual vocabulary of rainbows, angels, blue skies and white clouds and her enigmatic titles. Consider: ‘The Dinosaur, after a long pregnancy, went into a prolonged labor and produced a Mickey Mouse; when the American male Buffalo look down to their progeny, he exclaimed: Could this be a genetically modified Michelangela’ (2005). This weighty title, replete with biblical allusions, is not without a sense of irony. Religious contemplation exists concurrently with the kind of tongue-in-cheek language play that would make Warhol proud. 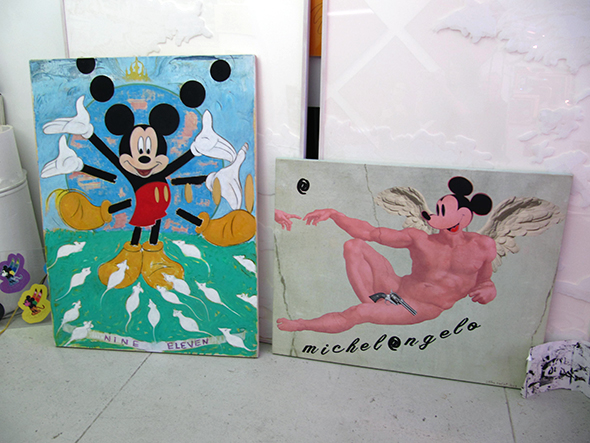 Her aesthetic is so often an intersection of seemingly opposing themes: Michelangelo meets Mickey, the religiosity of the Renaissance meets the amorality of Pop. Chaos and destruction are contrasted with beauty and serenity in works such as ‘Harlem 1.2 Megaton Christmas Island 1962’ (2005), a photograph of the test atomic explosions, the perfect image of violence against a calm desert backdrop.

In ‘Till Death Do Us Part, Electric Chair for Two’ (2000), Ultraviolet converts Warhol’s image, ‘Electric Chair’ (1971), into a neon-lit sculpture of two chairs facing one another, what she has dubbed “an electric loveseat”. If Warhol, and Pop in general, was considered cold and detached from its subject matters, than Ultraviolet appears to want to fill in the rest of the picture. Irony is present but so is optimism, violence and tragedy are present, but counteracted with warmth and light. More than merely representing two sides of any given dichotomy, Ultraviolet seems to recognize the transcendent beauty in all. Afterall, Mickey Mouse, the pre-eminent symbol of commodity culture and bad-taste, is given wings to fly away.