As a musician, visual artist, and writer Noah Becker’s works cover an array of mediums. Based in Canada, the founder and editor-in-chief of Whitehot Magazine began as a musician and quickly transitioned into the visual arts. Most recently, his paintings of free-floating planets’ have begun to attract attention. Each piece depicts an individual cosmos referencing history, fantasy, and the artist’s own reality, all contained within a spherical or boulder shaped plane. Rather than the Greek translation of ‘kosmos’, an ordered or harmonious system, Becker’s landscapes are bewildering, even unsettling, in their nonsensical layering of human drama. For example, in The Realms Series (The Cabin), a piece referencing medieval depictions of the world, Becker offers a mix of the best and worst traits of human behavior. Much like Hieronymus Bosch, whose narrative works are alluded to in some of the more bizarre and hellish imagery, Becker relies on primitive representations to convey commonplace themes.

Becker layers landscapes with complex narrative scenarios, prompting the viewer to observe both from close proximity and afar in order to absorb every detail. Representations of the human condition are coupled with disturbingly surreal dreamscapes. The works can range from fantastical, ironic and colorful atmospheres to dark, twisted, cave-like settings. The ‘realms’ Becker creates are both whimsical and nostalgic. His work is reminiscent of the landscapes of Pieter Bruegel the Elder whose detailed paintings of peasant villages carefully depicted day-to-day idiosyncrasies. It’s rather easy to make the connection between Becker’s work and the styles of both Bruegel and Bosch, especially when considering the latter’s Last Judgment triptych. Fellow artist Trevor Guthrie states that “Becker’s works evoke those ancient nightmares from our deep memory of the past. The medieval superstitions and horrors by Bruegel and Bosch, turn out to be a contemporary dystopia; scenes, symbols and clueless characters languishing between the cracks in our capitalist divide.” 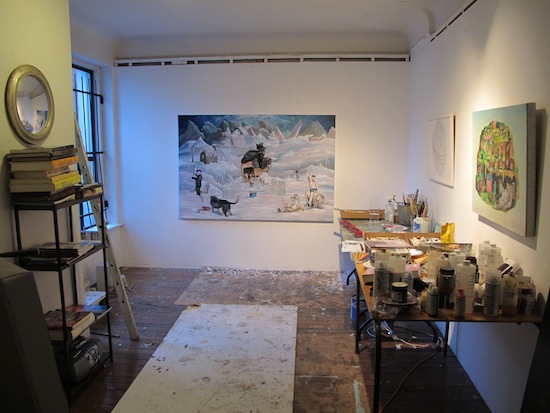 By depicting ‘ordinary’ people doing ‘ordinary’ tasks, Becker’s images also allude to another Northern European aesthetic, that of Joachim Beuckelaer’s Four Elements series. Suggesting such influences may only be speculation, as Becker explained in an interview with Homa Nasab for Art Info, his representations of the human condition are “more about the way I see and less about emulation.” Nonetheless, Becker has admitted that his artistic development has been affected by the works of certain artists, in particular Diego Velásquez, Francis Bacon, Jeff Wall and Kai Althoff. 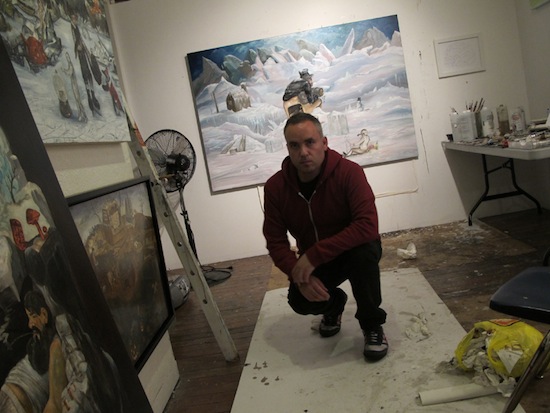 Aside from these influences, Becker’s work transcends and skews the expected image of the human condition. In the artist’s opinion, he represents the world as it has been given to us through the media, science, and history. He shows that each person has their own understanding of the world generated by exterior and interior perceptions of reality. It’s no surprise that Becker has stated that other than being a musician, writer, and visual artist he thinks “being an astronaut would be so great, seeing the earth from space is [his] dream.” His ‘lost’ continents seem less like mapped microcosms and more like floating worlds. In fact, they are sometimes more reminiscent of contemporary culture than the Medieval and Northern European works cited above, such as those illusions of space and broken worlds presented in Wolfgang Petersen’s The Neverending Story (1984).