SHIRIN NESHAT: Examines the theme of love through the lenses of gender, probably as established and enforced since the 1979 islamic revolution in Iran. In her two- channel video work, Fervor, 2000, Neshat seems not only to highlight the frustration and helplessness of Iranian women in this paridigm, but also to demonstrate how the negative view of love within the revolutionary culture affects the natural human feelings.

On a recent visit home to London, I was lucky enough to check out the Shirin Neshat opening at the Parasol Unit foundation for contemporary art. After walking through Yinka Shonibare’s Jardin d’Amour (Garden of Love), a tricky endeavor, I eventually arrived at Shirin’s video installation Fervor, 2000. Also exhibiting was Yang Fudong, and Christodoulos Panayiotou under an overall theme of ‘I Know Something About Love’.

Fervor, 2000, was being projected on two screens in black & white, and immediately focused on the negative view of love within the Iranian culture after the Islamic revolution. The black & white medium was an instant reflection of the clear-cut contrast of men and women in the mosque, with women in black veils and the men in white shirts.

In this piece, Shirin Neshat depicts two stories, one of a man, and another a woman, both in the same place, at the same time on independent screens. Throughout the narrative there is an infuriating conflict between the focal characters, as they both notice each other’s presence even without being able to see one another. This tension builds until the female character leaves, creating a feeling of helplessness with the audience. This division between the projection screens helped to depict the separation and distance of love within the culture, and separation from the women in this society, a detachment possibly felt by the artist after the Islamic revolution in Iran. 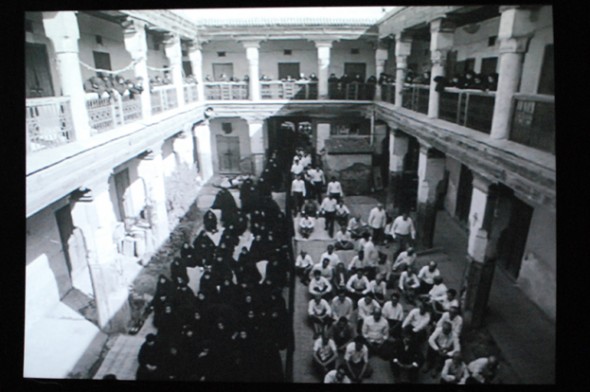 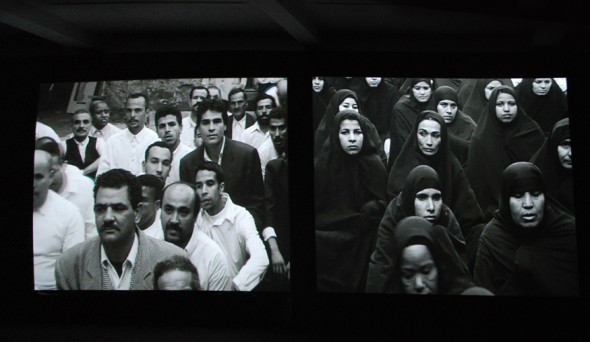 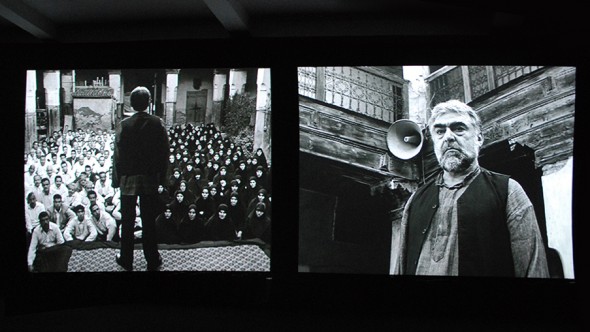 Adam Roche is an Illustrator and Animator born in London, now living in Berlin.