Last week, we sat down with Almagul Menlibayeva (presented by Priska C. Juschka Fine Art) during the 5th Annual Art Dubai fair. Menlibayeva is a Kazakhstan-born artist who lives and works in Kazakhstan and Berlin. She creates a poetic blend of video and performance in a unique setting that brings together topics of Islamic cultural tradition and contemporary art, creating a language of so-called “Romantic Punk Shamanism” to present her view of her surrounding world and cultural history. Menlibayeva’s practice stems from her educational background in the Soviet Russian avant-garde school of Futurism, which she combines with a nomadic aesthetic of post-Soviet, contemporary Kazakhstan.

“My educational background is in the Soviet Russian avant-garde school of Futurism, which I combine with a nomadic aesthetic of post-Soviet, contemporary Kazakhstan – something that I have been exploring in recent years through my photographic and video work. I use specific ways of expression in modern and contemporary art as a vehicle to investigate my personal archaic atavism as a certain mystical anthropomorphism. In other words, I explore the nature of a specific Egregore, a shared cultural psychic experience, which manifests itself as a specific thought-form among the people(s) of the ancient, arid and dusty Steppes between the Caspian Sea, Baikonur and Altai in today’s Kazakhstan. 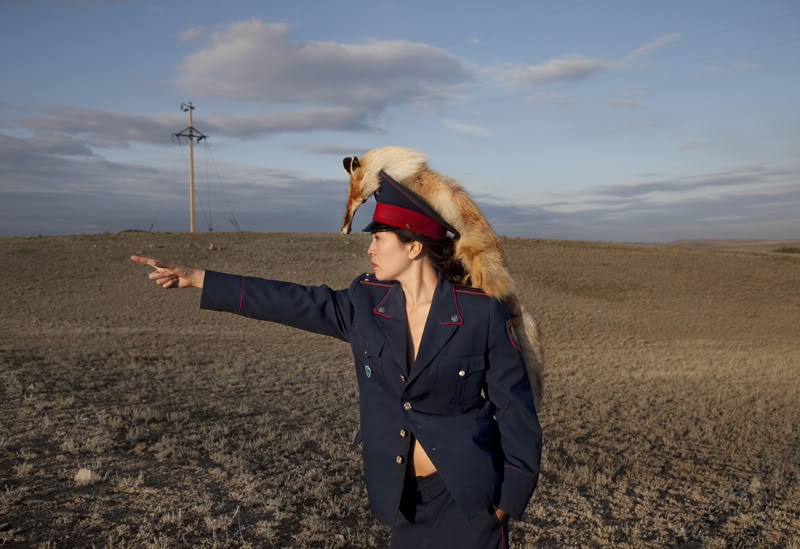 In the Russian language, Archaic Atavism is personalized as a being, which points to and creates a different meaning. We are not just speaking about an idea or archaic element in the collective subconscious of a people, but about the embodiment of our archaic atavism which becomes an active entity, just like a creature itself. Our archaic atavism is not just internalized, but also externalized. It is as if he has been awakened by the post-Soviet experience of the indigenous Kazakh people, who are becoming their own after 80 years of Soviet domination and cultural genocide. Suddenly he (Archaic Atavism) became interested in enculturation and in behavioral modernity. He also began to have entertaining dialogues with the transnational circulation of ideas in contemporary art. For this dialogue, I have chosen the medium of video and photography and like to work with the notion of memory and reality. My archaic atavism is interested in my video explorations in the Steppes and in post-Soviet Asia. By editing raw data and combining documentary and staged footage, I become his voice, enabling a cultural eхоdus from long oblivion. My work raises metaphysical questions such as Who am I? and Where shall I go?; this (psychic) experience and perspective marks my artistic language.”