As a freelancer, I have a small and nearly empty bank account, but I still dream about buying artworks off the gallery walls. Of course, not all great art can hang above a couch, so my fanciful thoughts then fade to debating the merits of the works on hand and the art scene itself—typical thoughts for a critic and curator.

Frieze just launched its German and English language art magazine based here in Berlin. I was shocked to find that my corner spätkauf carries it, stacked in a pile next to trash mags and newspapers.

Four Days of Jodorowsky at the KW Institute

Four consecutive days of viewing Alejandro Jodorowsky is a test in endurance, but a rare opportunity to view his haunting films in a cinematic context. The neo-goth crowd loves David Lynch nowadays, but maybe Jodorowsky will take over that crown. Jodorowsky will be in-person to discuss El Topo at the Wednesday, May 11th screening.

Kunstraum Kreuzberg/Bethanien is an unassuming art venue, but curator Maik Schlüter’s tight curatorial concept relieves any insecurity felt by walking into a building better suited to after-school youth programs. The works in Urban Noise are primarily photographic or related to photography’s expanded field (slides, projections, and other forms of print); photography is still one of the most useful ways to document urban entropy. Diana Artus’ black and white xerox prints are vague and muddled with instances of familiarity at the same time as strangeness. I hope to see these works produced on a large-scale. In Korpys/Löffler’s Die Stadt von Morgen (2007) everything in the city is broken, but never completely destroyed. Stephanie Kiwitt’s humorous series 4 jours fours (2010) documents unused self-service check out machines, things seemingly efficient, but rarely ever preferred to buying lebensmittel with a human cashier.

Installations after a performance can be done well; Cyprien Gaillard’s beer tower ruins at the KW Institute are a great example of how the aftermath of the performance tells you just as much as what you could gather from as being there on opening night. However, the worst type of post-performance installation makes you wonder what you’re looking at because it has no bearing on the original performance. 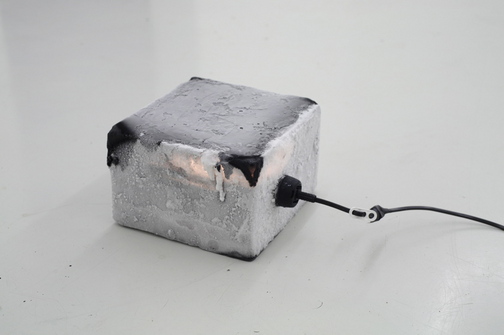