The traditional office environment seems the antithesis to the artist studio. In order to promote maximum efficiency it attempts to homogenize its members, suppressing those creative impulses that lay outside of the corporate agenda. The studio, by contrast, is dedicated to individual creativity, allowing maximum time and space to its pursuit. Of course, if seven series of The Office has taught me anything, it’s that offices are not always very good at eradicating time wasting, which against the humdrum of office life, becomes a creative pursuit in itself. Meanwhile, as artists have become increasingly professional, many acting as administrators of their own vast projects, studios have come more and more to resemble offices. So, the office-worker and the artist may not be so removed from one another, a fact that Ignacio Uriarte seems to be keenly aware of. Before life as a full-time artist, Ignacio was a business school Graduate, working for companies such as Siemens and Canon. Now, he uses the office environment as his primary subject matter. His space in Berlin is the office as studio, a place where the paraphernalia of office life exist purely as the artist’s own materials. 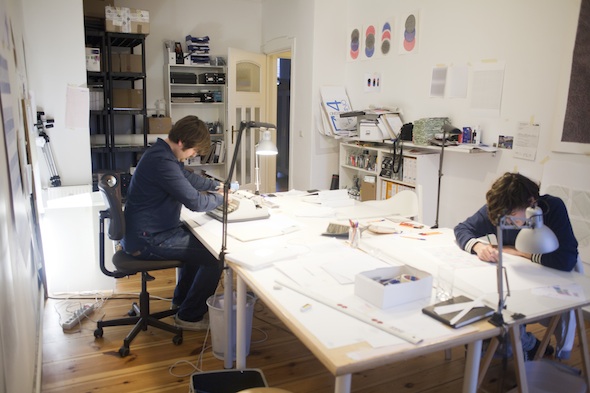 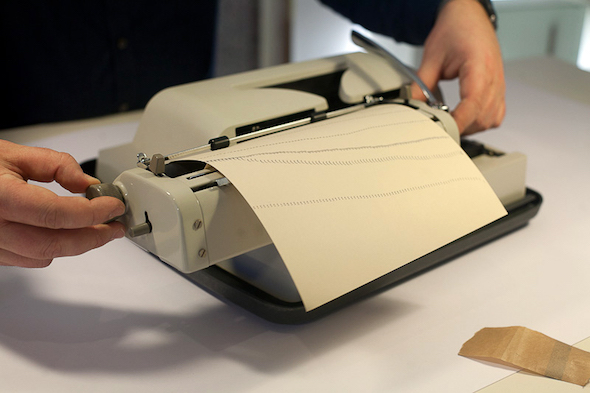 The time-wasting tendencies of office life are well documented in Uriarte’s work. Drawing series such as Template Drawings, 2008, or Bic Monochromes (2002) revel in the aesthetic of the compulsive scribble or the repetitive doodle. Other works are almost inventories of office supplies that have been creatively misused. The A-4 cycle (2004) is a table stacked with rolled up sheets of blank A4 paper. 60 squeezed out ink cartridges (2005) is well, just that, on paper. What the corporation would view as wasteful, Uriarte renders as art. Given that Art has long had to defend itself against accusations of pointlessness, Uriarte sort of turns the tables – recreating moments of sheer boredom and inefficiency in the corporate world as useful precisely because they are artistic. 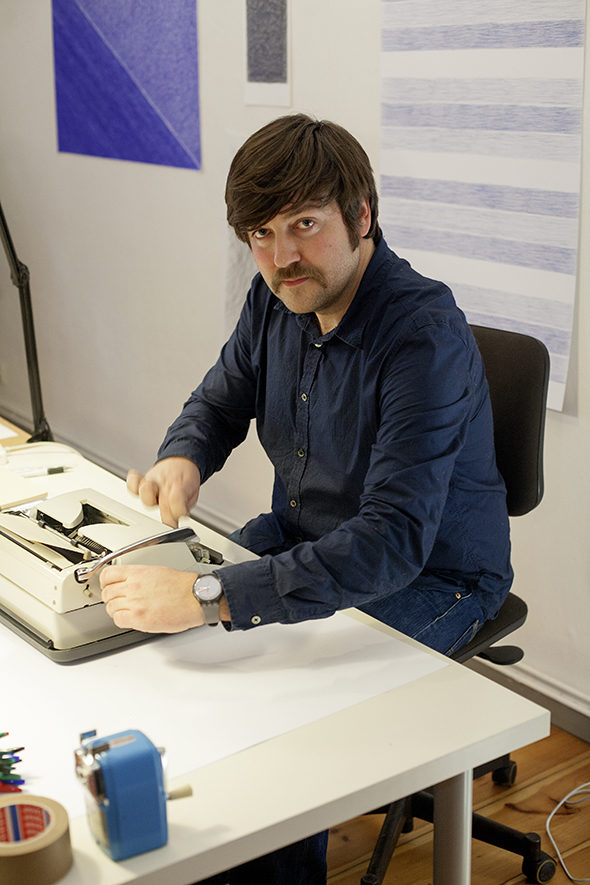 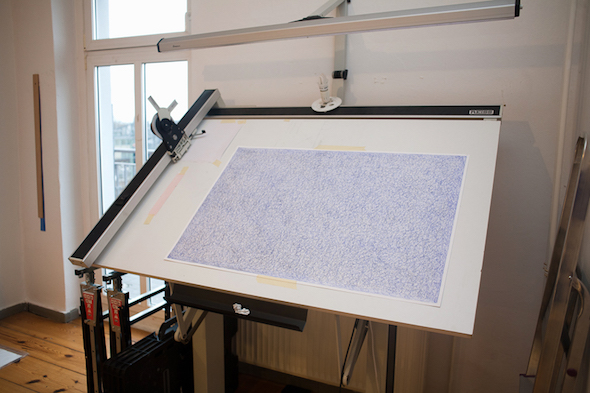 Ignacio’s work draws neat comparisons with early Conceptual art, especially due to their methodical and serial nature. All My Days (2004), a record of all the days of the artists life on a single Excel sheet, seems almost a consolidated version of On Kawara’s famous Today series of “date paintings.” But where the comparison ends, is perhaps in the total use of “the office” as an aesthetic parameter. Uriarte does not merely mimic a rational, administrative aesthetic but inhabits this world completely, allowing for some very humorous and human elements to creep in. The Excel sheet in All My Days is a sarcastic nod to a ubiquitous technology – one that is both over-used and misused on a daily basis. 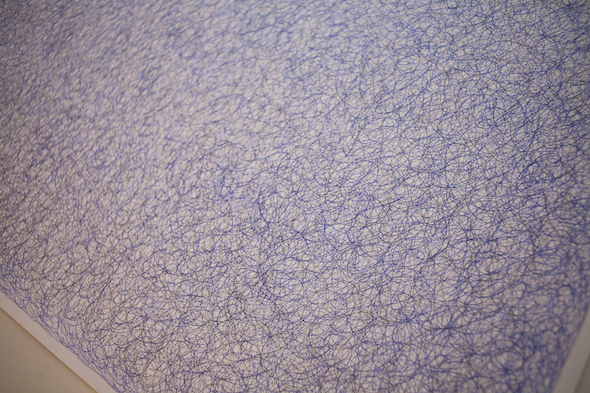 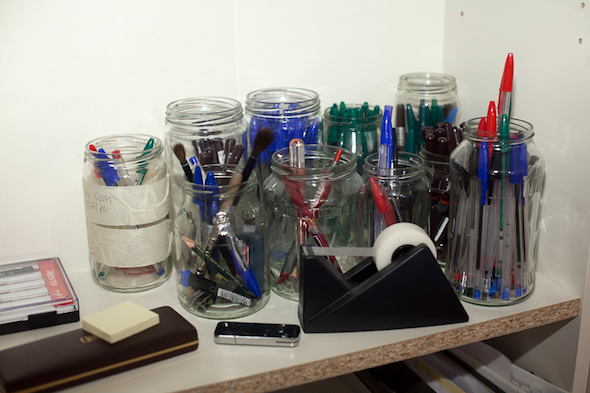 In The History of the Typewriter Recited by Michael Winslow (2009) Uriarte employed actor and comedian Michal Winslow (of Police Academy fame) and his extraordinary ability to mimic sounds to re-create an oral history of the typewriter, its changing clicks, clacks and clunks over the last one-hundred years. The resultant film is both bizarre and enthralling as Winslow contorts his face in every which way to produce the noises of a now virtually redundant technology. As with his other work, The History of the Typewriter shows intense effort being employed in pursuit of the mundane, the soon-to-be obsolete and the unnecessary. In the corporate and art-worlds alike, passing time can be in and of itself rewarding and boredom may be the very source of interest in our lives.

Artist statement: “When I quit my last administrative job in order to work as a full-time artist, I realized that the newgained freedom implied a great deal of responsibility. Under no circumstance I wanted to abuse art for the sake of a personal liberation, which would have turned me into a cliché-artist (rebel and marginal). On the contrary, I decided to stay in my own personal ‘petit-bourgeois’ reality in order to deal with it from the inside, using the expertise acquired over the years. That is why I have not stopped using the same tools and methods, similar to those of any office employee, working in a routine way and with routine as my major focus.

My starting point is the little creative moments within office-routines, which mostly have a ridiculously small ‘artistic’ aspect to them. Examples: When we scribble during a phone conversation (20. Bic Monochromes, 2005) or when we rip off a page from a block (10. Blocs, 2003) we are creating small paintings and sculptures. The systematic repetition of these activities according to predefined rules turns them into meta-routines, into re-enactments of the Sisyphus myth. The only difference is that the resulting pieces register in detail the methodical and repetitive labour that was necessary for their production. This way, the routine survives, enabling the audience to read and mentally recreate it. Aesthetically, my work shows clear references to the conceptual and minimal art of the 60s and 70s. In those years the dematerialization of the art object in the art world and the substitution of products by services in the business world occurred almost simultaneously.

Maybe that is why the esthetics also started to look alike, e.g. in the chromatic limitation or in the formal simplicity, which would signalize how both, commercial products and art objects now would be generated in a (blank) mind. We could even speak of a mutual fetichization which led for instance to the use of neon light and the archive as artistic media and to the preferred use of minimalist art as decoration in offices.”