In recent years Istanbul has garnered a reputation for having a thriving underground creative scene. Unlike the usual arts power houses of Paris, London and Berlin, this European capital is just now finding it footing within the international contemporary arts scene. Istanbul oozes inspiration with a landscape and culture that is distinctively unique as it remains a city in flux between Europe and Asia, tradition and progress, Ottoman Mosques and construction zones.

The neighborhood of Tophane has carved itself out as a petite art’s distract within the western side’s new city (complete with it’s own Art Walk Guide boasting a modest 11 destinations). It is in this enclave that I found Ifran Onurmen (b. 1958 Bursa, Turkey), currently showing his signature look of collaged and sculptural newspaper instillations at Pi Artworks. The show, titled Otopsi (Autopsy) is the seventh in Onurmen’s series in this vein, both visually and content wise, possessing social and political undertones that deal heavily with contemporary Turkish society. 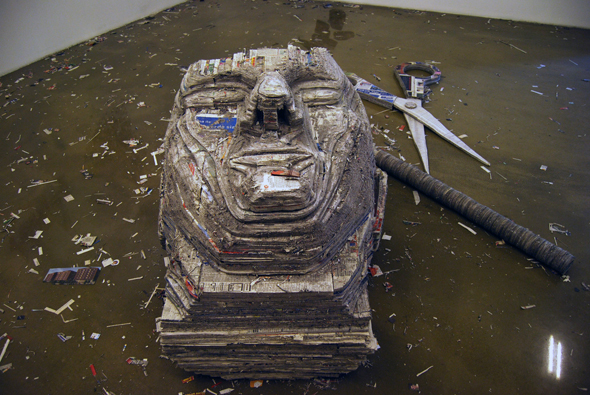 Roughly cut out newspaper photographs were collaged in amorphous shapes on the gallery walls while remaining scraps littered the floor around a central sculpture. This sculpture is a crude interpretation of a man’s head, laying down with his eyes to the ceiling. Created from stacked papers that have been chiseled away to create the shape, the process revealing the geological-like nature of the medium. A disproportionately large pair of scissors and scalpel, also constructed through recycled newspapers, lay to the right of the head while a large clear plastic coat hung to an empty wall. 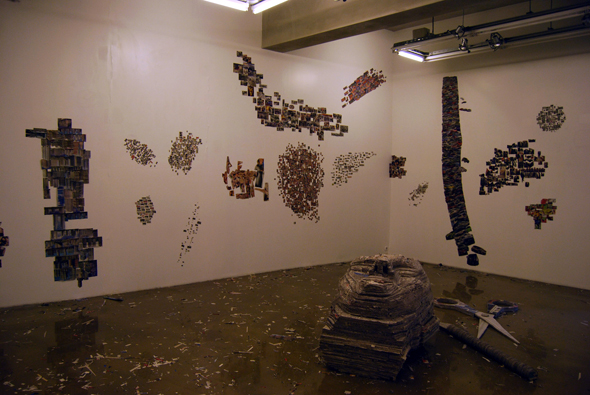 Like a crime scene investigator searching for answers, Onurmen has categorically broken down photographs from the daily paper with subjects ranging from tightly cropped faces, to cars and sky rises. All familiar in their reading of objects but autonomous from their context, the images create a portrait of the society they represent. The main object, the head, is in fact composed entirely of the context from which the photographs come, however it remains unreadable due to the papers overlapped nature. It lies as the the most literal part of the instillation titled Otopsi, but only points us in the direction of explicating ourselves through our media portrayal. 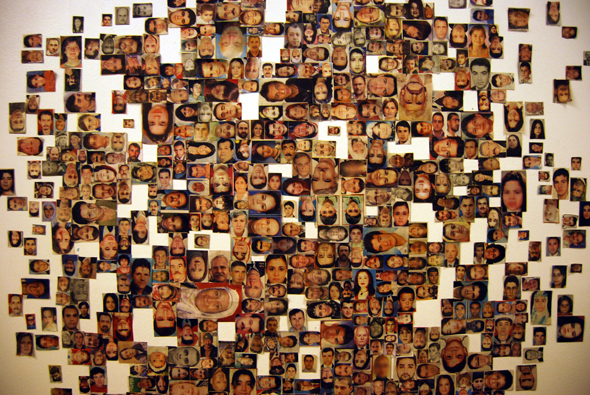 I found the most poetic reflection comes from examining the collages. They are a collective memory of sorts, and I suddenly felt as though I was participating in trying to establish a narrative. A majority of the photograph groupings are void of cultural significance and are instead based on commerce. The viewer is then faced with the reduction of a collective culture that is lacking a national identity; an issue that can be applied throughout a globalized world such as ours. On the topic of advertisements and newspaper images, Onurmen has said they have the ability to “profusely and consecutively flow through all levels of our lives,”  thereby driving and defining the larger portrait of one’s self, culture and country. This infinite propagation the medium of newspapers allows is represented through the manic and repetitive construction of the collages, while the visual codes are thoughtfully chosen to play a clever game of show and tell of the social reality in a city rife with transition.