The German Pavilion of the 54th Venice Biennial is incorporating the gap between on one hand representativity and identity (signifiers that are meant to express the unchangeability of a certain reality behind) and potentiality (being something that opens up a plurality of possibilities, which remain unknown, but carry change). It is actually the gap between a national, cultural denominator (the idea of a national Pavilion itself) and an open field of idea exchange, which a biennial could offer. 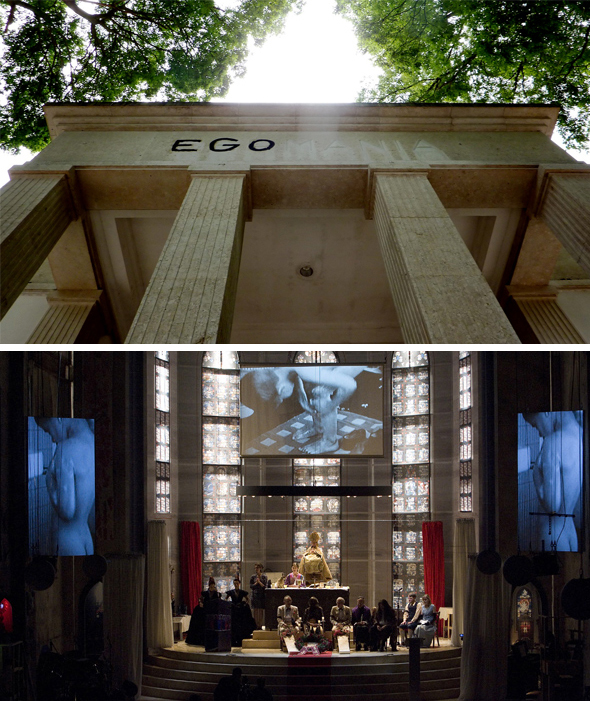 The collection of works of theater, opera and film director, performance artist and political activist Christoph Schlingensief, which the German Pavilion features, seems a documentary attempt on Schlingensiefs world, replacing the initial project, which Schlingensief himself had in mind for the Pavilion and which under the force of circumstances – the early death of the artist – unfortunately remained unfinished and could not be realized. 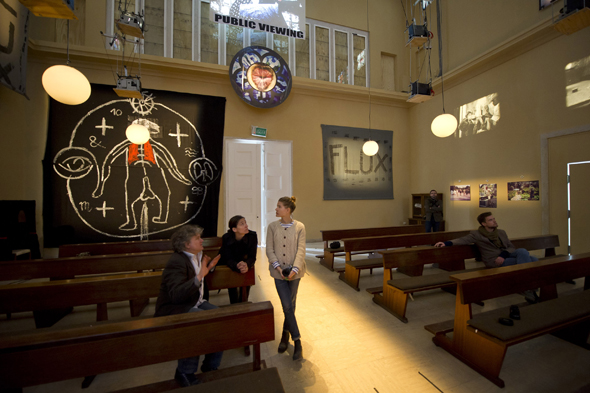 The exhibition comprises Schlingensief’s church-like scenography of his Fluxus-Oratorium A Church of Fear of the Stranger in Me (which Schlingensief himself understood as an installation and opened for visitors), a selection of Schlingensief’s feature and short films, as well as material on Schlingensief’s Africa Project: the Remdoogo Opera House, which he started building since 2010 in Burkina Faso. Conceived and constructed in collaboration with a local architect, the Opera house has spaces for living and creating, schools and medical centers, where indigenous children and artists were involved. The Pavilion shows Schlingensief’s own documentary material of this vast project and its territory and fragments of Via Intoleranza II, Schlingensief’s piece with Burkinian actors.

Curator’s Susanne Gaensheimer option, determined by the force of this regretted situation, was, as she states herself, a Pavillion on Schlingensief, in the impossibility of having the one by him. Although encompassing works by Schlingensief, the Pavillion looks like an archeological site of sample-gathering, extracted of Schlingensief’s universe, a very neat, coherent display in space. It reinforces the classic model of an intellectually devoted curator – a specialist that ‘takes care’ of a legacy: whose work is that of collecting, of preserving, of documenting ‘art’ and the artist. 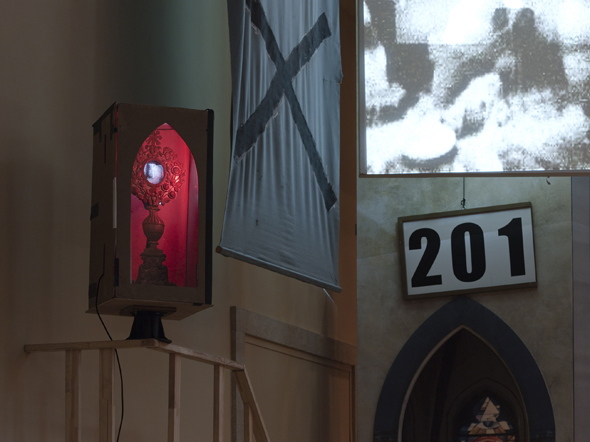 Egomania: intervention on the Pavillion Facade, All others: A Church of Fear of the Stranger in Me, installation, German Pavilion in Venice (2011)

It seems that the Pavilion does maybe transmit, but not encompass Schlingensief’s experiments with the efficiency of art: in turning transformability and destabilization of symbolic and cultural capital into a political medium. Also a question of efficiency is how the unpredictable, the unexplainable, the unknown can be turned into affirmative means of extracting creative potential out of anarchy and directed to performe a detour, in search for truth.

Schlingensief’s work raises many other question: what is the potential of interdisciplinarity for the present context, far beyond the transgression of a discipline’s limits and the Fluxus dictum of the inseparability of life and art.

But finally the Pavilion makes us think – paradoxically – on limits: limits of curating, limits of display, unsurmountable physical limits.

MARTA JECU: Since Berlin Art Link is a magazine dedicated to the recent Berliner culture, I would like to ask you first how do you consider that the art of Schlingensief influenced the recent Berliner urban culture, which played again a decisive role in shaping a multi-faceted contemporary German identity?

SUSANNE GAENSHEIMER: Schlingensief was a really central figure in the Berlin cultural life, as well as in its political life, but also across the entire German speaking cultural space and I have invited him because he confronted himself over tens of years in a very consequent form with themes that have been German.

How do you see his role in the construction of this Berliner culture starting with the ’90?

With his first theater pieces which he has done during the nineties, in Berlin, at the Volksbuehne, he has brought into boiling the theater scene. Many of his other political actions were also outside Berlin. But I think that it is very important for Berlin and for Germany that he has made a step towards outside with his Operndorf (The Opera Village) in Africa, where he has put questions with reference to Germany, but then transferred them to global, transnational contexts.

I see an interdependency between Schlingesief’s theatrical practices, his actions, his entire visual vocabulary and a general urban aesthetics in Berlin.

I did not think about that. I cannot say if his work had such a strong influence on the urban aesthetic, maybe. I think that Schlingensief had a very particular style and the reasons for this certain Berlin aesthetic, have to do not only with Schlingensief: there are involved economic questions, questions regarding status, the way the cultural scene has developed in Berlin before the unification, after the unification. 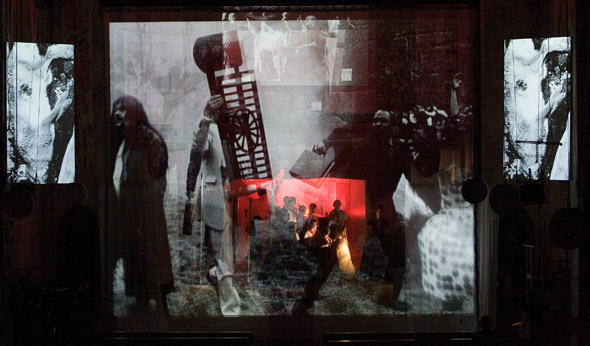 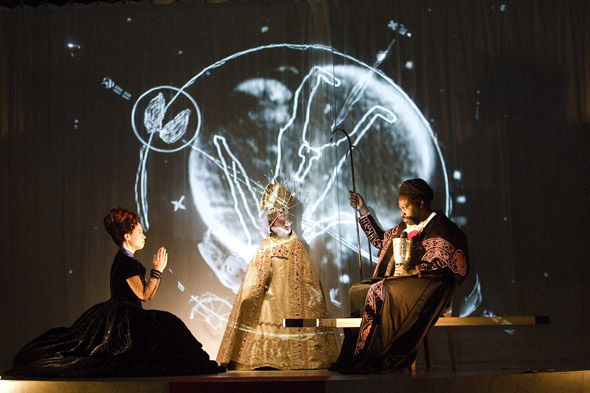 Photographs of Fluxus – Oratorium A Church of Fear of the Stranger in Me, German Pavilion in Venice (2011)

But all these aspects, Schlingensief has incorporated in his work.

As I have said also yesterday, his images, his actions and his opinions have accompanied us. He has from this point of view, influenced us. But I do not understand him as an opinion leader. He has been far too complex and contradictory for that.

How do you understand Schlingensief’s personal creative process?

He started as a film director. He has started to make movies since he was a child and I think this was what he mostly wanted to do: filming. His movies were never really accepted. In a certain scene they have been really took seriously and respected, but they didn’t receive the general visibility which he had wished for them. Than he passed to theater, towards which he was at the beginning skeptical, but he had a very big impact and became more and more concrete in his political actions. What he did was transforming his critique into action. His works are commentaries on certain phenomenas. For instance his TV moderations are all commentaries on social happenings. I believe that he has changed very much after his disease, he was lacking the energy to step towards the outside, he became more silent, he concentrated more on inner matters and he gained more courage to treat these into a more existential dimension, to take out past confrontations as for example in the Church of Fear of the Stranger in Me (showed here). His entire work and each of his works are about a single inner process.

When Schlingesief was still alive, was this the project that you have conceived together with him for the German Pavilion?

No, it was completely another project, he wanted to do something else, inside and outside the Pavilion.

And than how did it come to this exhibition?

Because the one we planned back than together has not been completed. So we decided, together with Aino Laberenz (his wife and collaborator) not to make a project which he didn’t finish, since we cannot continue his creation, we cannot play his role and decide in which way he would have done that and this – something that was impossible for us.

Why did you choose particularly this project?

It was out of many reasons and most of all because we wanted to show a work that was entirely his. For me it was important to show his work not as some scattered pieces but a unity and overall coherence, that shows the complexity of his work. I wanted to have many aspects: the theater, the film and the Operndorf. We have chose this work also because it has been thematically important for us in this moment.

Schlingensief’s work could be understood also as a curatorial endeavor, in the sense that he is collecting, interpreting, creating new connections between things, aspects or situations from reality. How is it possible to curate this works, which is in itself a curatorial adventure?

I have been working with people that have been very close to him in his working process. I have tried to set into motion and direct a process of curating, in which I have brought in different voices, coordinate them at points that I found important. I think that this was the only way in which I could deal with his work in this situation, since his work is so multi-layered, involving so many people, and without implying them, it is not possible to do it.

Now after Schlingensief is not here any more, how do you think his work can be oriented towards the future, can be given, with curatorial support, a chance to continue to unfold?

This is actually what I have tried to do with this exhibition. I am planning also to do a major retrospective of his work, there are various projects that I am involved in, in this sense.

Marta Jecu is presently a researcher at CICANT Institute in Lisbon, and has contributed for various magazines, including E-Flux, Kaleidoscope, Journal of Curatorial Studies, Idea Arta+ Societate, and various critical books, such as Visual Studies, Ed. Jim Elkins.