The Venice Biennale is the Disney World for artists, curators, and collectors. It’s a place where people journey to wander bewilderedly through the maze of the city, get caught in tourist traps, and anxiously wait in long lines— all to see the “spectacular shows.” The art never ends in Venice, it’s merely an impossible undertaking to view it all and becomes a social competition to visit as many museums, galleries, and palazzos as possible.

The 54th Biennale, ILLUMInations curated by Bice Curiger, opened to the public June 4th and will run through November 27th. This grandiose exhibition showcases 89 participating countries (a huge increase from the 77 in 2009) and 83 artists from around the world. After a three-day art extravaganza through the Arsenale, Giardini Pavilions, and various spaces scattered around the city, I still did not see everything. The pieces that leave me with the strongest impression are the installations in the Giardini Pavilions that directly deal with themes of nationality, politics, and patriotism. The works presented by the American, Swiss, Great British, and German (in no specific order), facilitate both intriguing and problematic questions because they patriotically discuss their countries current politics in a critical manner. 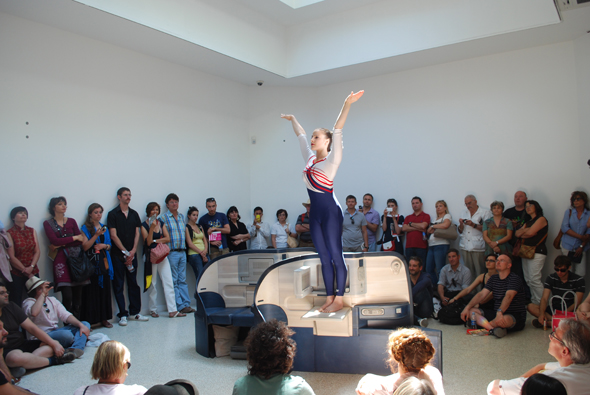 The American Pavilion’s exhibition, Gloria, shows six multifaceted works by the artist duo Jennifer Allora (from the USA) and Guillermo Calzadilla (from Cuba). This exhibition confronts American notions of military, religion, economy, and competition in the most ostentatious way possible. Parked outside the pavilion is a massive 60-ton military tank with a treadmill planted on top that a professional American athlete runs on, controlling the speed of the caterpillar tracks. This performance, which occurs in scheduled intervals, generates a piercing noise heard all through out the Giardini that seems to scream, “Here is America!,” and almost always successfully attracts a large gathering of spectators. Inside the building, there are two wooden replicas of first-class plane seats that serve as balance beams where Olympic gymnasts perform cheeky moves for an audience (an inarguable crowd pleaser). For what’s not to enjoy about an athletic body dressed in American patriotism flexing for the sake of art? Even more gimmicky is the piece in the next room: a functioning ATM machine hooked up to a pipe organ that creates musical tones when viewers press the keypad to withdraw cash (it was reported in the first three days alone over 10,000 Euros had been withdrawn.)

Consumerism seems to be a running theme through this year’s Biennale. Thomas Hirschhorn’s piece for the Swiss Pavilion, Crystal of Resistance, is an overwhelming gaudy installation of superfluousness. Crystals, dolls, packing tape, empty bottles, and Internet printouts of various pop culture images (such as celebrities and war photos) cover the pavilion from floor to ceiling. It’s a sensory overload that manages to be so superficial that it’s shockingly offensive. But can Crystal of Resistance leave more of a profound impact than a quick aesthetic experience? Is it not problematic that the content is overshadowed by the intriguing placement of the art objects? Essentially, the installation is a bit reminiscent of that art school “trash” project your sculpture friend did senior year because he ran out of money. It doesn’t matter what the materials are because they complement one another well and look creative when juxtaposed.

The British Pavilion was highly anticipated because the queue seemed endless. After a desperately long wait, Mike Nelson’s installation is an unexpected relief. This traditionally elegant British Pavilion (to those who know from previous Biennales) is entirely reconstructed into a labyrinth of uncomfortable rooms complete with boarded windows, dusty floors, and seizure-inducing lights — the kind of space that you would most likely encounter in the ghettos of Istanbul or backstreets of Venice. This hyper-realistic replica (most of objects were shipped directly from Turkey) is a bit contrived in its meticulous arrangement of junk and consistent reminder to “not touch.” Luckily no one got hurt on the low plank ceilings, exposed wires, and rusty cans, however it’s definitely an anxiety-ridden space that you want to escape as soon as you enter. This experience makes you realize that you’ve spent a quarter as much time in the pavilion as you have in the line. Perhaps that’s part of Nelson’s intent— to create an exclusiveness and competitive determination to enter what should be a generally public, disregarded, and abandoned space. 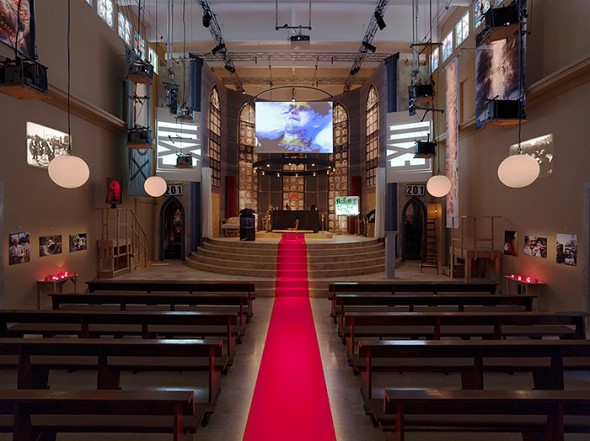 A similarly unsettling sentiment resonates in the German Pavilion, where curator Susanne Gaensheimer creates an homage to the late artist, Christoph Schlingensief. This installation, which deservingly won this year’s Golden Lion Award for Best National Participation, exhibits a retrospective and memorial self-portrait of the recently deceased artist. In the main hall of the pavilion is an adaptation of the Schlingensief 2008 piece, A Church of Fear vs. the Alien Within, which is a large religious installation that replicates the church Schlingensief spent most of his adolescence in. Viewers are encouraged to immerse themselves in this spiritual experience by sitting on the church benches that face toward the main “art alter.” On the side walls, are several projections of his autobiographical experimental films, as well as various works from 1960’s fluxus artists like Joseph Beuys. Echoing around the space are musical scores by Richard Wagner synchronized to a stern German voice narrating his political films. This full sensory experience makes it merely impossible not to feel Schlingensief’s expressive and serious tone in confronting complicated German politics. Consequently, this somber resonance makes for a difficult critique.

So then, what is the ideal mode for Biennale artists to patriotically represent their nation while acknowledging the faults in their political system? Is it for artists to use sarcasm like the American and Swiss, or directness like Great Britain? Perhaps it is simply as Christoph Schlingensief said, “We ought not to make ourselves too comfortable on the basis of origins.”