What do off-spaces have to do with the debate on whether Berlin needs a Kunsthalle? A lot. In Berlin, the non-commercial, non-publicly funded exhibition spaces for art, are plentiful and constitute an important part of the art scene. Due to the lack of a central hub for contemporary art, the artistic community is consequently fragmented into parallel discourses and scenes.

The five curators of based in Berlin aptly invited a few off-spaces to participate in their exhibition program. In the based in Berlin catalogue they explain that they did not confine their selection to artists producing works in Berlin, which often are “never exhibited here”, but included project spaces in order to present a concise picture of Berlin’s art scene that would reflect and momentarily suspend its fragmented condition. Indeed, none of the off-spaces involved reside in proximity to Berlin’s major art institutions and all differ in program, structure and motives for being part of the based in Berlin show. 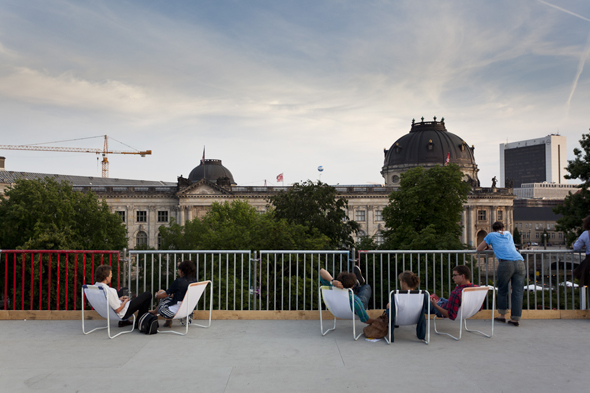 View from the platform at Atelierhaus Monbijoupark; Photo by Ivo Gretener

Autocenter is celebrating its tenth anniversary this year. The international acclaim for artists who have began their career at Autocenter, has even prompted some insiders to name it the secret Kunsthalle of Berlin. Throughout the years, it has developed institutional character by showing artistic diversity and quality in high frequency, so that we can practically not speak of an off-space any more.

For the founders Joep van Liefland and Maik Schierloh the based in Berlin show is a great way to promote their space outside of their pledged community. Autocenter is preparing for an auction to be held in the fall of this year, where donated art works will be sold in order to safeguard its existence and future development. 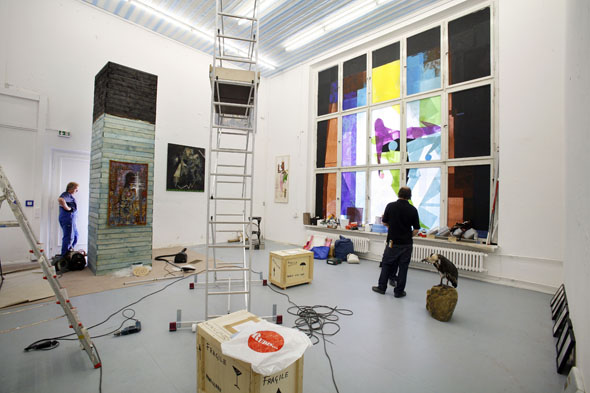 Based in Berlin exhibition view; Autocenter; Photo by Amin Akhtar

PMgalerie founded in 2009 and located in Neuköln, is also temporarily inhabiting the Atelierhaus Monbijoupark. The non-profit space is often mistaken for a commercial gallery and while the founders Aurélia Defrance and Julie Grosche do not exclude selling art in the future they will never turn into a commercial space. Their focus is on the collaborative processes between artists and curators resulting in the exhibition as a “joint work”. The founders live where they exhibit and provide studio space for artists – more often then not this situation is integral part of the artistic experimentation.

As curators, Grosche and Defrance gain freedom and grow from professional challenges by being part of the based in Berlin show. The provision of unprecedented working conditions, such as a production budget were certainly appealing enabling PMgalerie to commission art works for the first time. As directors, they temporarily give up some control over their exhibition space. Throughout the based in Berlin show, PMgalerie presents a relaxation zone with works of artists Aude Pariset, Maxwell Simmer, Anne de Vries and designers Clémence Seilles and Raoul Zöllner. The visitor soon notices, the excessive supply of art is not easily circumvented, only maybe, by use of Simmer’s deck chairs on the little patio in front and the roof terrace. 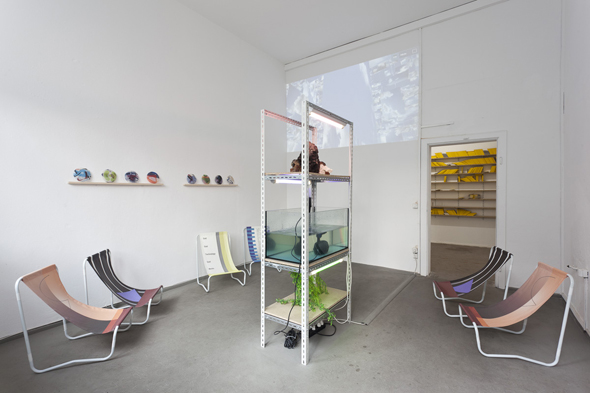 The third off-space showing at Atelierhaus Monbijoupark is Evas Arche und der Feminist. Starting in 2005 and continued in New York from 2007 until April this year, Peter Kisur is reintroducing Evas Arche to the local artistic community through based in Berlin. Traditionally, the evenings provide coziness with an exhibition, music/performance and soup. The food may signalize the importance of solidarity among artists considering the existential struggles they may encounter throughout their career. However, it must not defer from the main purpose, which is art, and therefore is embedded in the curatorial concept. Next event: July 24: Exhibition, performance and soup “In a room with Renaissance figures”

The artist initiative After the Butcher was founded by Fanziska Böhmer and Thomas Kilpper in 2006 in the Spittastrasse in Lichtenberg as a space by artists for artists with a commitment social questions. Following the invitation to the based in Berlin show, they initiated an open discussion with their community of artists with the purpose of making a democratic decision about whether and in which form After the Butcher could take part in this much debated event. Kilpper negotiated the budget with based in Berlin and hired artist Ulla Rossek to coordinate the debate and subsequent program of the collective, which ultimately intends protest through artistic participation. Whereas several artists opted out, all those in favor were able to propose works for their space in the fourth floor of the Kunstwerke. The results are performances and artistic interventions by six groups of artists which are accompanied by the only classical work of art in their program: Clenn & Guttmann’s Allegory of Governance shows a life-size portrait of Berlin’s major Klaus Wowereit who looks into the empty space. It is a refusal to show him what he supposedly demanded: Leistung. 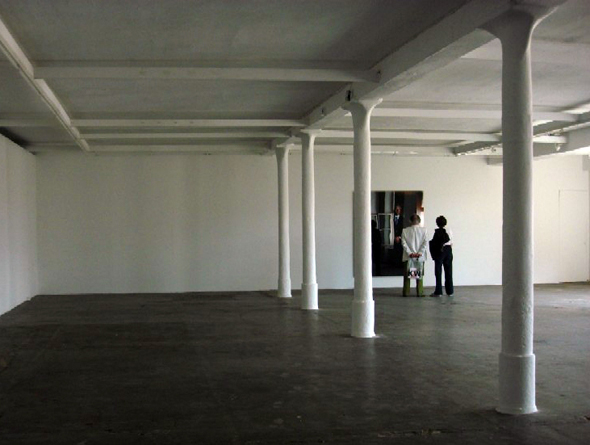 Based in Berlin exhibition view, art work by Clegg & Guttmann; After the Butcher; Photo by Axel Gerber

Galerie im Regierungsviertel in the form of the Forgotten Bar Project closed down its room in Kreuzberg at the beginning of this year. The future of the space, which founded by Maike Cruse and Tjorg Douglas Beer is yet unknown, but their participation in the based in Berlin show may certainly strengthen their presence in the collective memory of Berlin’s artistic community. At Hamburger Bahnhof, “The Forgotten Years 2007 – 2011” is an inventory of works from past exhibitions which have actually been forgotten or given as presents to the gallery.

Off-spaces echo artistic freedom outside of institutional restraints and market forces. Their existence is determined by the pursuit of self-assertion and of influencing the status quo of the dominant discourse, which outside of institutional and commercial structures usually implies that the actors have to put up with unpaid, yet unremitting, work. Hence, oftentimes, exhibitions and art works are produced where experimentation meets struggle for existence. Whatever their motivation to be part of the based in Berlin show, these off-spaces become part of the temporary core of the art scene in the city. Money, curatorial freedom and attention enable them to continue their artistic experimentation within exceptional conditions, i.e. temporary suspension of the off-part of their identity for a louder voice in the global artistic discourse.