Babylon Kino Mitte is showing two films by Raymond Pettibon, the acerbic graphic artist responsible for the cover of Sonic Youth’s Goo album, on Monday, 27th June. Hot on the heels of a solo show at CFA, both films are Berlin premieres. Known for his iconic album covers and zine-style ink drawings featuring surfers, old-time baseball players, gangsters, religious nuts, trains, Gumby and the character Vavoom from the old Felix the Cat cartoon, Pettibon is also the author of a series of low-fi home videos, made with his friends beginning in the 1980s.

Sir Drone: A New Film About the New Beatles (1989-90) chronicles the trials and tribulations of two nascent punk rockers in late-70s Los Angeles as they struggle to not be posers. Filmed over two days, it stars Mikes Watt and Mike Kelley. The Whole World is Watching: Weatherman ’69 (1989-90), starring Mike Watt, Kim Gordon and Thurston Moore, offers up sketches of historic encounters between the radical splinter group of the Students for a Democratic Society, Weatherman,
and pop celebrities like Jane Fonda and John Lennon.

Both films are in English, and the co-producer Henry Vincent will be present. 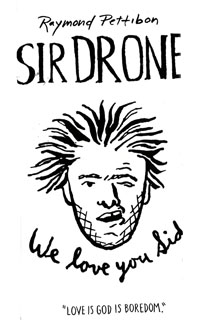 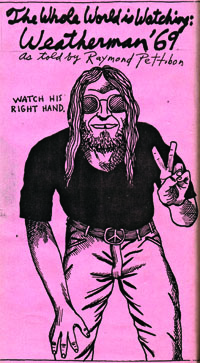