This Friday, July 15, Artconnect Berlin, a new networking platform for the city’s creative sector, will be launched in an effort to unite the different segments of this scattered and often disconnected community. Facilitating the flow of information, contact, ideas, jobs and services, Artconnect Berlin aims to promote the general development of artistic projects in Berlin. 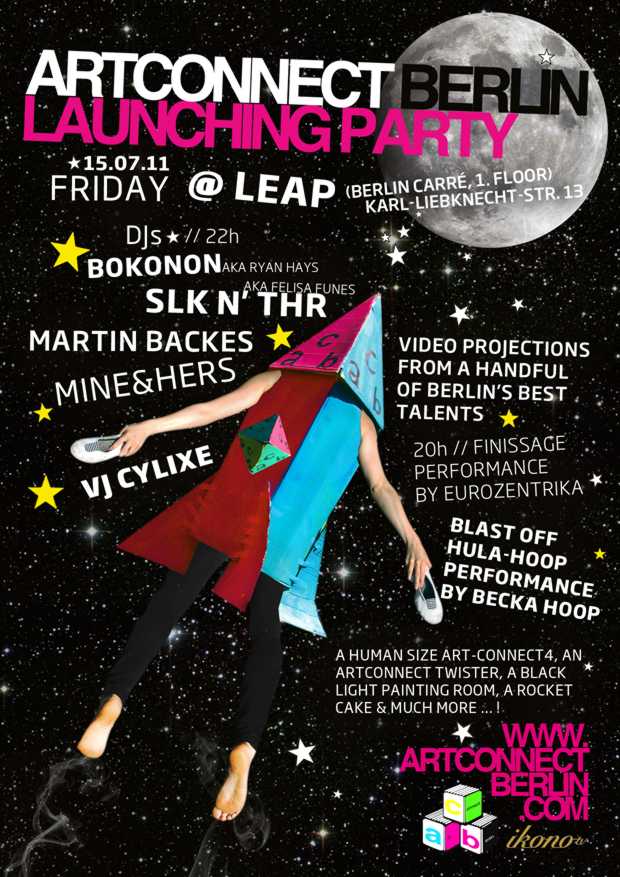 See below for the evening event schedule:

VIDEO PROJECTIONS from a handful of Berlin’s best talents!
First round from 10 to 12pm
Second round from 2am to the end!

A human size ART – CONNECT4, an ARTCONNECT TWISTER, a BLACK LIGHT PAINTING ROOM, a ROCKET CAKE and much more..!

LEAP is an independent project space supporting the advancement of experimental artistic practice and production in the area of emerging technologies and performance.

EUROZENTRIKA is a young art & theory group reflecting on current theories, discourses, medial and political polemics on the concept of “European Identity”

ikonoTV is a Berlin based production company dedicated to making visual arts a natural part of everyday life. Through close cooperation with curators and artists ikonoTV powers ikonoMENASA, a pioneering HD art TV channel that produces accessible and innovative narrationless art TV, in a critical move to break barriers and open up a dialogue that transcends linguistic boundaries. ikonoMENASA is broadcast in the Middle East, North Africa and soon in Europe.