The Great Babylon Circus, curated by the Berlin-based critic and curator Lukas Feireiss in collaboration with the MU in Eindhoven, Netherlands, brings together cutting-edge creatives from the filed of art, architecture and design to engage in the continuation of the never-ending design of the Tower of Babel. The Tower of Babel is one of the primordial metaphors of architecture, art and construction, as well as of the multiplication and confrontation of diverse languages and styles. The Tower also symbolizes the ultimate hubris of human creation — the ambition to build something larger than life itself.

With the round tower as its central element, The Great Babylon Circus choreographs ambitious experimental artistic positions from around the globe with a joyful sense of the spectacular. MU becomes the arena in which visions of the world collide and melt together. In a collaborative effort, spatial installations and visuals from micro to macro-scale are presented, reaching out as a source of inspiration and an invitation to build on and on for creatives across all disciplines.

The list of participating artists includes Brazilian social and cultural collective Project Morrinho, Belgium-German art collective Speedism, Moroccan artist Mounir Fatmi, and London-based think tank Tomorrow’s Thoughts Today. The collaboration of these four global creative practices in the arena of MU will unite around the mythic Tower of Babel theme, presenting us with new angles from which to view this legendary subject, and arguing for its social, political, and cultural relevance in today’s world. 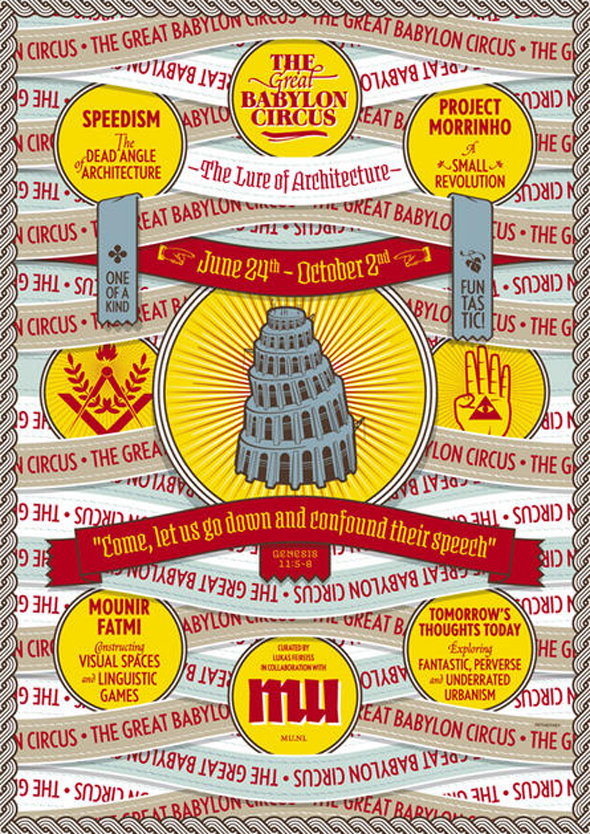