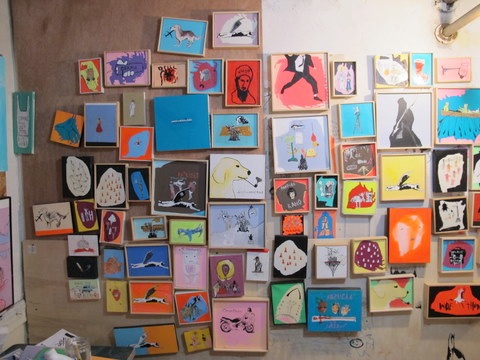 Sunday, August 7, 2011
Brian Leo’s work hits you like a wall of noise or, rather, a wall of noises. On any given wall, a multitude of brightly colored canvases vie for attention. The New York based painter has dubbed his style “Garage Pop Surrealism” and this really couldn’t be more apt. While Garage describes the punk and highly personal elements, Pop is the iconic. Surrealism, then, is what happens when these two meet – when an image of a dog with a pipe appears alongside Osama Bin Laden. Each painting alone has a certain internal logic, but viewed en masse, the works become a sprawling non-linear dreamscape. It is perhaps not surprising that the paintings are often sold in clusters – the installation is a part of the work. 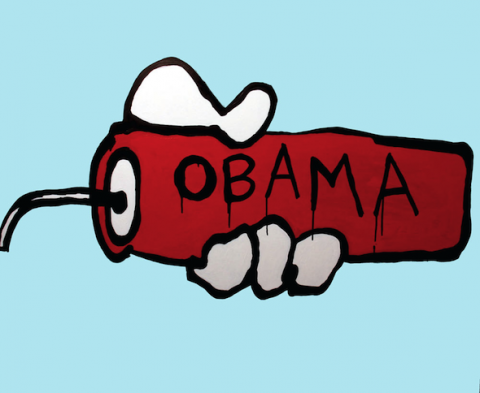 For the most part, Leo’s paintings are relatively small, often containing a single central image on a flat colored background. Simple pictures (dogs, birds, faces) often stand-in for larger issues. Every major global event of the last few years seems to find its place on Leo’s walls, be it Bird Flu, 9/11, Haiti, Obama, Hurricaine Katrina, or the GFC. In many ways, each individual work performs the function of a headline, sound bite or tweet, having the appearance of delivering a simple direct message while simultaneously becoming abstracted in the sheer onslaught of visual information on display. The works not only simulate what life is like in the age of information (at first glance, Leo’s work reminded me of a mainstream news site where the viewer is literally bombarded with information via pop-windows, links and imbedded videos) but are also a profoundly genuine attempt by the artist to grapple with the most topical issues of the day – internet pornography, sex trafficking, war, disease and so on.

In Nobel Prize (2010) Leo’s political undertones are at their most overt. A cartoon-style hand firmly grasps a red missile, bearing the word “Obama”, in what can only be described as a ‘jerk-off’ gesture. The work, made after Obama was awarded the 2009 Nobel Peace Prize, is said to reference the President’s deployment of additional troops to Afghanistan just weeks after winning the award. Even without knowing such specifics, the image could still easily be read as conveying a sentiment along the lines of, “What a load of political wank!” 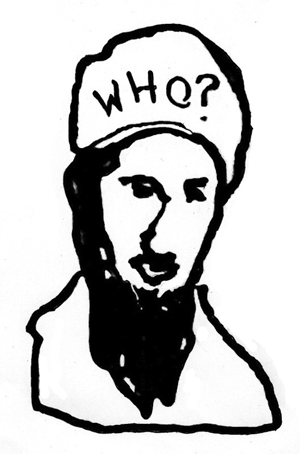 In a medium that so often shies away from didactics of any kind, Leo’s paintings are opinionated, unashamedly so. In Who? – the iconic outline of Bin Laden’s face is branded with the word “WHO?” Leo has opined that, as media attention around Osama declined, his role as the world’s favourite scapegoat became more apparent. While certain topics may be coded at times (Leo has suggested that all images of birds are a discrete reference to the Bird Flu epidemic), a sense of political fervor is nevertheless conveyed, strengthened by the artist’s consistent critique of apathy of any kind.

In perhaps his most well known image, Cat With Dustbuster, a cat is depicted lying flat on its back, arms thrown behind its head in presumed ecstasy as it is pleasured by a conveniently located, free floating dust buster. As in Peace Prize the mastubatory connotation is deployed for comedic affect but the resultant image is infinitely more bizarre. Simultaneously mundane and provocative, the image reveals sex as boredom, bliss as banal. If Leo’s almost obsessive interest in events, politics and media is one modality, then Cat With Dustbuster presents the other alternative – shutting off from the world and sinking into a pleasure-induced stupor. Amusements, pleasure and porn are depicted in Leo’s work as the anathema of activism and yet news media itself has become a form of entertainment (a point that has not been lost on Leo). Leo’s bright psychedelic canvases are an analogous distraction, almost challenging us to resist becoming totally overwhelmed. 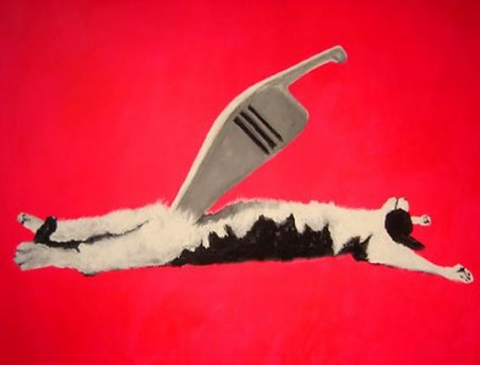 While at art school at Rutgers (graduated 1999) Leo gradually shifted away from making highly personal, emotionally charged works, to something less raw and more mediated – his present-day Garage Pop creations. Now, personal narratives are interwoven with social and political commentary. Leo’s micro canvases and bubblegum pop palette, are the perfect friendly welcome mat to enter into his quirky world. Once inside, the personal elements are often just out of a reach – a private joke perhaps or a coded reference to a relationship gone sour. Leo’s work is intimate without being over-exposed. As little differentiation is made between the personal and political, the viewer is inclined to see how the two realms are one and the same. 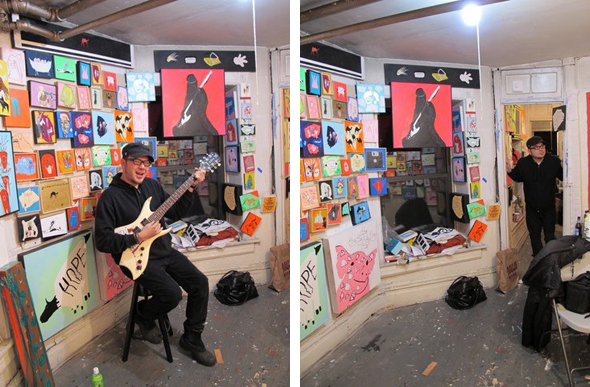