In the age of fast, streaming internet video and ever-fewer, fledgling art cinemas bold enough to show video art, single-channel video work rarely finds itself publicly presented outside the gallery – perhaps wedged into the darkest corner, shielded from a din of chatting visitors by a flimsy curtain, or plopped into a cube within a cube, with passers by swinging in and out as dictated by interest or attention span.

Sometimes, however, video has its day. Berlin Art Link is pleased to team up with Independent Curators International (ICI) in hosting their single-channel video exhibition, Project 35. Part one of four was presented last week to an intimate screening room of Berlin-based curators, artists, and program directors at Soho House Berlin.

In its 35th year, ICI brings a program of work by 35 artists, chosen by 35 curators, to international and varied audiences. Its interest in video as a medium partially due to the relative ease of widespread exhibition, New York based ICI brings together curators and artists from six continents. The audience here in Berlin has been only one of many to view this traveling exhibition. 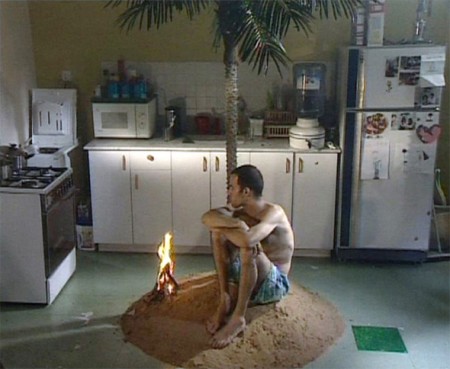 Guy Ben-Ner’s Berkley Island (1999) opened the evening after a brief introduction by Monica Salazar of Berlin Art Link and Jessica Wallen of ICI.

The piece presented the artist, (an Israeli selected by an Egyptian curator who lives and works in Belgium, exemplifying the transnational nature of the series), in a self-narrated, semi-autobiographical work, whose title references George Berkley, the 18th century philosopher, known for his axiom that “to be is to be perceived”- that nothing exists outside of our perception.

This allusion set a fitting framework within which to experience this program, hand-picked for the importance of global exposure.

Among the pieces that followed – there were nine in all, each neatly numbered with its own title card including information about both the artist and curator – a few more stood out as particularly appropriate for this form of presentation. 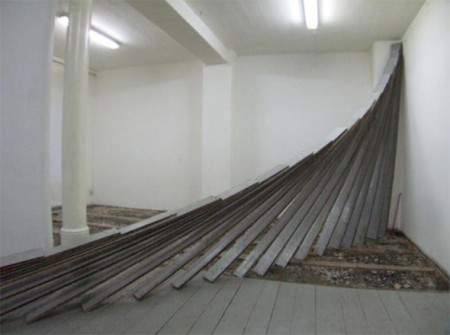 Yukihiro Taguchi’s presented work, selections from MOMENT (2007-8), a lighthearted wink to Berliners among the international selections, addressed a city in which art is very much at home, literally taking a studio on a playful walk through the park.

In the silent selection “Moment – performative spazieren” (Performative Stroll) the floorboards from an empty room in Kreuzberg, an area of Berlin highly populated by artists and art spaces, form into a sort of character, crawl out the window, and walk around the neighborhood, all with the aid of Taguchi’s stop-motion animation. 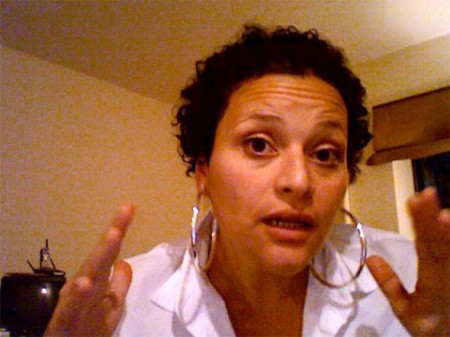 Addressing issues of access, class and identity politics (making artwork about “who yo’ peeps”), and post-identity politics (“you take identity politics and… you flip it… it’s kind of like retro clothes”), Wanda Raimundi-Ortiz’s Topic 1: Contemporary Art (2006) used her direct-address, Bronx-based video character “Chaluta” to explain high art concepts in a casual, urban jargon within a Youtube aesthetic, a nod to the fact that we could be screening this medium at home in our underwear, but oh, we are not.

The setting provided a shared, if intimate experience, reminding us how nice it can be to sit down and concentrate on a good chunk of carefully curated, single-channel video, without feeling the need to slide over for fleeting interlopers.

Berlin Art Link plans to team up with ICI, moving on to the second part of this four-part series during Art Week in September.

Cate Smierciak creates and writes about film, video, and photography in Berlin. She received her BA in Radio/Television/Film at Northwestern University, participated in the FAMU International program in Prague, and spent a year at the HFF Potsdam-Babelsberg on a DAAD Artist Study Grant.