I am pro-weird but the recent show at Kavi Gupta, “Adult Contemporary: Family Romance,” curated by Marc LeBlanc and James Krone, came with flashes of authentic disturbance. I felt the curators were searching for something genuinely outer realm amongst the cacophony of trash aesthetics in contemporary video. A popular quality of ‘cool’ is to shoot just below the retro centre. With many of the artists hailing from Los Angeles, the screenings had a second-rate Hollywood feel to them, with subdued slasher film references, mystical and/or kitschy desert footage, and intentional B-movie clunkiness.

Addditionally, I was blissed out on Aaron GM’s ‘Ramp’, the best of show. Fun and fast, it felt like talking to one of those spacey guys from high school who were so far inside of their personal vortex that one is nothing if not charmed by their inner climate. 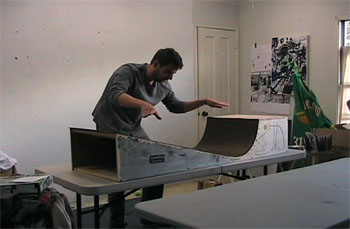 On the other hand I felt that there was too much of a trial-of-the-audience boredom aesthetic. Watching Kelly Kleinschrodt’s ‘Sonata’, a detailed shot of a nipple pump for a solid five minutes was hardly a strain; in fact it could be incredibly meditative in real time (given Western culture’s breast addiction), perhaps even shamefully delicious? However, a video of anything that repetitive can be challenging, if not alienating. Probably the video that cleared the room fastest however, was the spazzy and pulsating piece ‘Untitled (Women)’ by Deanna Erdmann solely for its use of strobe-like effects.

Overall the show was daring, pushy, and a threat to sunny summer video shows everywhere.by Wendy Vogel
The second annual video survey at Kavi Gupta Gallery emphatically draws a connecting line between Berlin and the aesthetic of Los Angeles. Whether or not all the featured artists are in fact Angelenos, the works turn on tropes of slacker boredom, romanticizing the cinematic California landscape, and the film industry’s (adult and otherwise) construction of high artifice. The screening drew an enthusiastic crowd for its opening- yet many of the films, however light in theme, seemed bent on testing the limits of viewers’ patience.

Music video-esque films, spaced in intervals as a visual palate cleanser to the more tiresome films, left much to be desired. Strassburger and Mannis’s deconstruction of the contemporary alpha male through kitschy ballad and trippy graphics, fell short of their MTV counterparts. California-based Marnie Weber’s ‘Mel’s Hole: A Love Story’, set in the desert with a cast of masked characters, fared better, but I found myself wishing for a bit more context on her fantastical narrative work.

On the opposite end of the spectrum were several structuralist meditations. Erdman’s flicker film, ‘Untitled (Women)’, nearly cleared the room with its unrelenting strobe-like effect and glitchy soundtrack. Where this begged for some serious editing (at six minutes, it felt like hours), Dawn Kasper’s ‘SoundSound’ seemed too short. The film of empty leaders, paired with an ephemeral soundtrack, clocked in at under eight minutes- barely enough time to parse together the abstract narrative hinted by the film. West’s ‘Tar Pit’ and Wiggs’ ‘Surffer’, hallucinatory and “painterly” portraits of Southern California landscapes with a conceptual twist, seemed to strike the best balance.

All the discomfort of the structural films, however, paled in comparison to Kleinscrodt’s ‘Sonata’ and Hoeber’s ‘Kissing’. Both works imposed a distancing mechanism to de-eroticize tropes of Hollywood romance, both becoming torturous in ways the artists may not have intended. ‘Sonata’ is a fixed camera close-up of a nipple pumping into a breast pump. Accompanied by a surging classical soundtrack, the film loses its irony, unintentionally reinforcing the essentialist woman-as-nature paradigm. In ‘Kiss’, a series of barely-edited kissing scenes, we witness two actors- complete strangers- begin to make out under hot camera lights. The real-time scene is deeply uncomfortable for both the actors and audience. With its clichéd finale- two blond Californians politely kissing on the beach at sunset- the film underscores a heteronormative bias in both romantic films and less mainstream fare.

In all, the push and pull between visual seduction and repulsion provides a welcome counterpoint to summer show breeziness. It is well worth slogging through the one-offs and durational ennui to spot the hidden gems, including works by Sterling Ruby and Kelly Sears. The larger thematic question — whether or not Berlin and Los Angeles are, in fact, sister cities caught in a “family romance” — is the true provocation posed here. Though at first glance they are unlikely partners, in the midst of this crowd it seemed clear that the two aesthetics are likely to brush up against each other, frequently, long after the spirit of summer romance has passed. 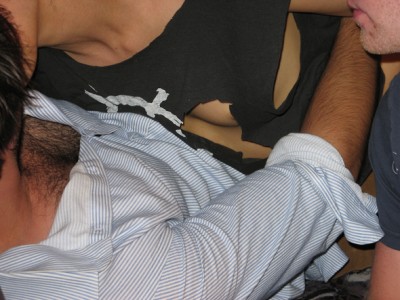 Melissa Steckbauer is a visual artist and writer based in Berlin. She studied art history at Utrecht University and fine arts at the University of Wisconsin-Madison where she received her BFA. She is featured in Berlin Art Link’s Artist Studio Visits and a review of her work will be published in the September issue of Revue Monstre.

Wendy Vogel is a critic and curator currently based in Bad Ems, Germany, where she is pursuing a residency at the Künstlerhaus Schloß Balmoral. She received her MA in Curatorial Studies at Bard College and was a Critical Fellow in the Core Residency Program at the Museum of Fine Arts Houston from 2009–2011. She was Editor of the Texas-based online journal…might be good from 2010–11, and has contributed writing to Artforum.com and Art Lies, among other publications.