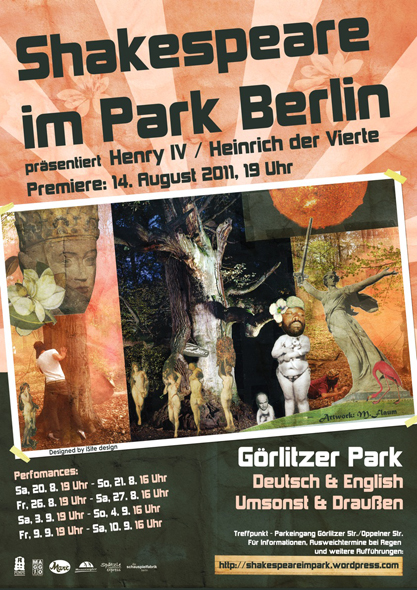 In the last fifty years, cities around the world have made it imperative that Shakespeare’s plays be inclusive, inquisitive and reread in a contemporary context. Berlin can now be counted among those cities that are eager to make the city a public stage.

Having premiered on Sunday, August 14th in Görlitzer Park, Shakespeare im Park Berlin positions itself a bit differently within the outdoor play tradition. More to the point, it only has its positioning to go on. There is no stage, no acoustical accommodations, no seating, no tickets, no line. There is also no fear. Regardless of Berlin’s fickle summer weather (that Sunday’s intense storms did not deter, delay or discourage the performers), the production took all of Görlitzer Park as a stage, using each of Shakespeare’s Acts as a prompt to shift location. And Görlitzer Park is the perfect forum for that kind of appropriation. Built by the citizens of Kreuzberg atop the old rail lines of the original Görlitzer Bahnhof, the park is still animated by this inherent program of perpetual motion, along with being populated by overgrown 20th century relics that speak of the city beneath the city.

In performing Henry IV until the second week of September, Shakespeare im Park incorporates these Görlitzer figures in an incredibly dynamic way. For instance, the company injects the passionate, contentious scene between two lovers in the sunken ruin of the old pedestrian tunnel that cut beneath the old train tracks. It is precisely this intersection of the traditional and the contemporary that I believe Shakespeare im Park decided on Henry IV as their inaugural production. The play is more or less rooted in the friction between a King and his crown-prince son, between traditional expectations and contemporary inquisitions. “So shaken as we are, so wan with care,” the works of Shakespeare are thought to be untouchable as tomes of English literature. But Shakespeare im Park makes no bones about injecting plenty of German into the performance, the transition of which is often so fluid that it took my Detusch-als-Fremdsprache brain a moment to recognize the shift. There are times when the production breaks down because of its logistical unconventionality (there were instances when it was difficult to hear, see, and move through the micro-locations smoothly), but what this production lacks in strategic cohesion, it makes up for in critical innovation.

As is to be anticipated, but somehow unexpected in its friction with the production of a Shakespearean work, the everyday ecology of the park does not slow down and intersects often with the production. The play “descends on the park and roams through it, playing with and alongside everyday park-goers and Frisbee-throwers, picnickers and sunbathers, newspaper-readers and beer drinkers.” Dog barks can drown out the lines of Falstaff, especially if his back is to you.

Ultimately, the aim is egalitarian access to some of the most seminal texts in English literature. And as Berlin becomes inundated by English linguistically- and culturally-based transformations, I find it poignant that this production has emerged at this point in time for Berliners of all ages and backgrounds.