Yujin Lee is a Korean artist currently living in Berlin, whom I met recently at the opening reception of the group exhibition “Fume Emits” at Loop – Raum für aktuelle Kunst. Here, she presented examples from her “Could Series,” and I was impressed by her large-scale pencil drawings of smoke and fumes caused by explosions. Sitting down with her, I asked her to speak more about her work and about her relationship with smoke.

Anna Russ: For those who are seeing your work for the first time presented here in Berlin, could you sketch a bit of a context for this series in terms of your prior themes and interests?

Yujin Lee: I have always been interested in political images, such as newspaper photographs of politicians, wars, or natural disasters. In the beginning, I approached this subject matter from a strictly political and conceptual point of view, simply using the images in an artistic way to say some kind of political statement. My previous works include drawings on front pages of newspaper, collages with fragmented images from media images, and portrait drawings of Korean politicians. However, my understanding of the meaning of using political images in art has changed. Cloud Series is a result of this transition. Based on found images of bombs and explosions, Cloud Series detaches itself from its original source image and stretches to create a completely new form of sensual and visual experience. 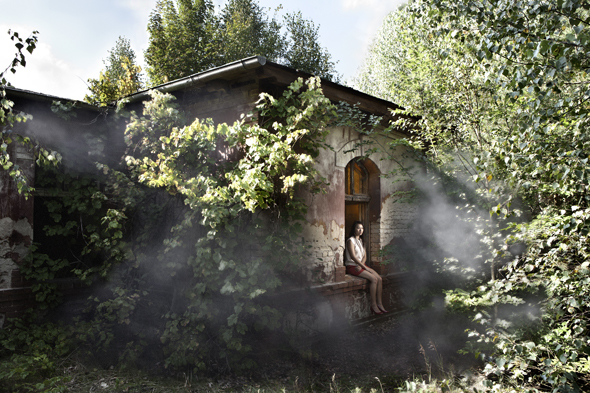 ‘Smoke Clouds’ is immediately accessible on one level – it seems a disciplined and contained re-reading of what could well be ‘after’ press images – smoke from volcano eruptions, military explosions, factory emissions, and car accidents. On the other hand, it strongly recalls a Vanitas tradition, thematically and aesthetically. Clouds of any description are by their very nature shape shifters, functioning as a projection screen to the viewer. Tell me how you come to your images and in which way you see them functioning.

There is something beautiful about ‘smoke’ because it is something we cannot take control over. It is intangible and ephemeral. Its shape is unexpected and transformable. In this sense, ‘smoke clouds’ can be an allegory for life, and be interpreted in line with the Vanitas tradition. The is different is that, while on the surface, my drawing is tangible, permanent, and fixed in shape, its visual presence differs from the paintings of Vanitas tradition. My drawing holds a subtle vibration within the stillness of the surface, as if it is ‘breathing’ between the lines.

The ‘Cloud Series’ is particularly energetic in terms of mark-making. There is a sense of urgency, of frenzy, perhaps even violent engagement. Could you speak more about your technical process? 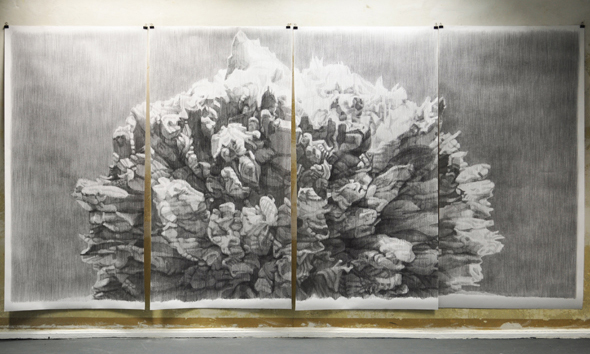 Smoke may be interesting in terms of being evidence, as in “Where there is smoke, there is fire,” but conversely can be dispersed or erased by a gush of wind. Perhaps you can speak a little to this paradox as you see it in your work.

I was always aware of the idea of ‘smoke’, which refers to the violent event in its previous moment. It’s a sign of caution. In reality, these moments pass by so quickly that there is no time to dwell over the smoke itself. When I started collecting smoke images, I really did it out of its pure beauty of frozen form and shape. Then I realized that a photograph of a ‘smoke’ doesn’t really capture the complexity of smoke. Because the process of taking a photograph is also a quick moment of capture, the final image looses the depth, the weight, the lightness, the movement, the feeling of fear and beauty, wonder, the mystery. There is something philosophically challenging about ‘smoke’, and I try to capture this complexity of smoke not only in the final result of my work, but also in the process of drawing. Bringing out the paradox of ‘smoke’ to the surface is essentially a big part of my work. 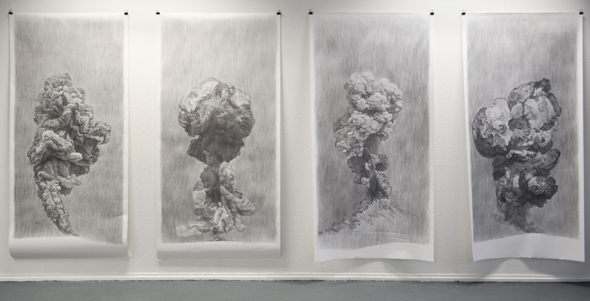 The implication of violence comes across strongly in the work. Looking at your artist statement, I was quite intrigued by your use of the Catholic/Christian framework for starting a contemporary and historic exploration of violence – a reality just under the surface of our everyday lives, as you see it. Would you care to elaborate on this statement?

Violence has always been around throughout human history. It seems like there are two ways of experiencing violent event: the one who is directly affected by act of violence, and the one who observes it. My personal experience is the later. Someone at the opening at Loop told me that my work seems quite ‘hopeless’. I really like this interpretation and I think it is essentially how the works came about. When we read about outbreaks of war or unbelievable natural disasters on news, our attitude is almost as same as reading a novel. As an artist today, when there are so much political art and so many artists who are political activists, I cannot help but think, “What can I do?” Even a couple of years ago, I believed that ‘Art can change the world’. But can it? Is it even the artists’ place to try to change the world and make the world a better place through art? This brings out a fundamental question of what art is in the 21st century. I believe art has to create essentially a visual experience to the viewer. It has to bring about whirl of feelings and thoughts that are beyond the experiences we get in our daily lives. Art is not about trying to find answers to problems. Art is about questioning. My work is about violence, yes. It refers to political events around the world, yes. But truly I want my audience to have an experience, which makes them think and feel beyond the experience they already know in the real world. I want the audience to have an experience of a subtle kick in the guts.