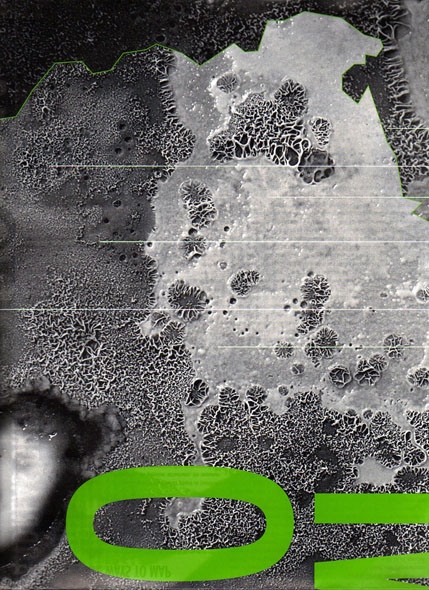 Even before experiencing the luscious and complex ecologies proliferated and put on display by Julian Charrière and Andreas Greiner for Dominions at PROGRAM, the initiative for art and architecture in Berlin, there is a powerful topographical presence that demands attention. The artists, together with Carson Chan, PROGRAM’s founder and curator of this exhibition, have displayed a series of glass vitrines, each containing a different sample of molds from different landscapes throughout Germany. Additionally, the windows into these microscopic worlds are built at different elevations relative to the body of the viewer, much like stalagmites pushing through the man-made construction of the gallery floor.

The loveliness of this exhibition lies in the playfulness between scales: each of these windows can be read as aerial views to an alternative, untouched geography that we have yet to mark with ribbons of infrastructure and clusters of cities, and each of the pillars that house these windows could be referencing the elevation of the site where the samples were taken.

The green repainting of PROGRAM definitely takes away from the delicate natural palate of the fungal/bacterial samples, but the attempt to leave no surface, even of the gallery space, untouched by this biological reappropriation is definitely hard to argue with, or ignore. The question put forward, one demanding a territorial reading beyond that of the ever dominant econo-political, is an extremely important one, and the exhibition presents these cross-sections of deeply complex and vibrant ecosystems as equally entitled to the land that we rapaciously populate. 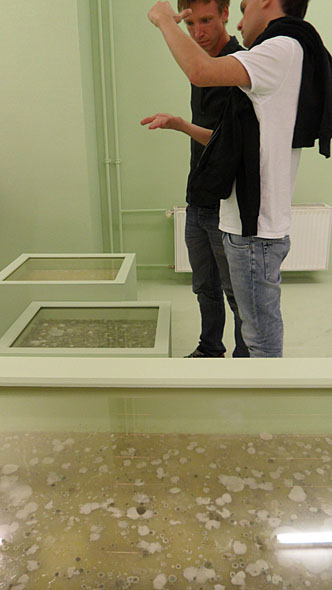 Artists’ Statement: “With the influx of people and capital in cities come decrees that will lay new roads and rail. Infrastructure, institutions, homes and public spaces proliferate as the population demands their use. As the city limits expand – pushed from within by the combined energies of development, and pulled from without by the gathering momentum of adjacent conurbations – its components separate, giving structure to the city’s zones; life naturally generates efficient forms.

PROGRAM presents Dominions, a commissioned exhibition by Julian Charrière and Andreas Greiner that breaches the gulf between national and microbial scales. Systematically collecting microbes throughout Germany, the artists will breed them in sealed glass vitrines in the gallery. The various molds collected will grow into colonies of different shapes, sizes and color; the interconnected network of filaments bursts into competing globes, hills, meadows and slime. This exhibition projects a new German topography, one that came into being organically and free of social, political or economical parameters.

More than just a question of territory, the word dominion implies a degree of legislated control. Traveling throughout Germany, the artists utilized the country’s infrastructure as a guiding logic for the collection process. Country roads, the autobahn, the rail network—systems of movement that impose a level of control on the landscape—were hijacked to bring the world of microbes permeating the same territory into the controlled realm of display vitrines. At its core, Dominions is a display of the will to control of the variegated manner in which this force displays itself in our lived experience.”

Julian Charrière & Andreas Greiner are both currently students in the Universität der Künste in Berlin, at Olafur Eliasson’s Institut für Raumexperimente. They have both worked together and separately, and are members of Das Numen, a Berlin-based art collective that probes questions both biological and mystical.