The exhibition of the two American performance artists Allison Fall and Madeline Stillwell opened last Friday at galerie OPEN by Alexandra Rockelmann and is presented in partnership with Berlin Art Link. Curated by Jeni Fulton the exhibition is fittingly entitled ANTINOMIES: GEGENSÄTZE. The title of the show makes reference to the philosophical work of Immanuel Kant who used the term Antinomies to refer to two claims that can both be validly proven with reason and yet contradict one another. According to Kant antinomies prove the limitations of empirical reasoning in establishing truth: if two contradictory claims can be proven as true, then reason cannot be used understand them. And for all that extends beyond the rational experience of our world we have performance art. 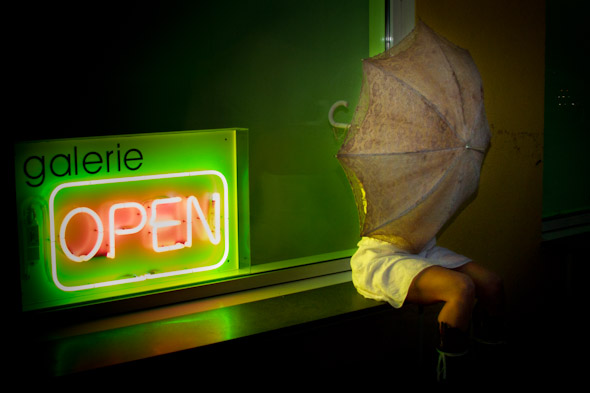 The opening of the exhibition on September 9th featured live performances by both Fall and Stillwell set amongst their collage and sculpture work. Fall’s performance began outside the gallery as the artist sitting on a bench wrapped her feet in AC bandages before gently pushing them inside heavy brass cowgirl boots. In a white sundress with a lace pink umbrella in hand she lowers herself to the ground on her belly, wriggling forward with the umbrella clasped in both hands, arms outstretched in front of her. The weight of the boots becomes apparent as they drag on the ends of limp legs, producing piercing sounds as the metal scrapes along the gallery floor. Pushing her way through the expectant audience she makes her way towards her sculpture in the center of the room, hundreds of delicate clay petals pushed into a circular formation on the floor, above which hang three precariously balanced hand-crafted bowls, a kind of sloppy scale, filled with an opaque white liquid. 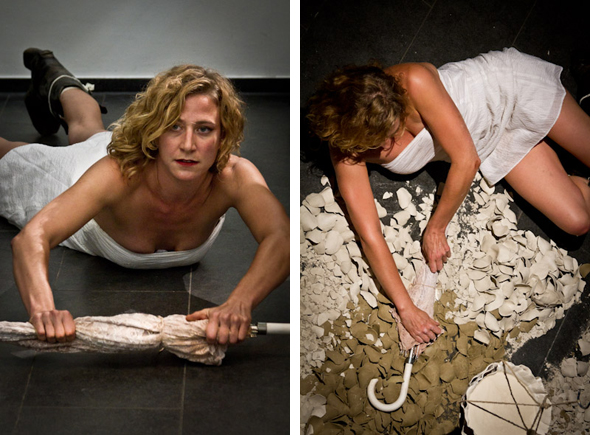 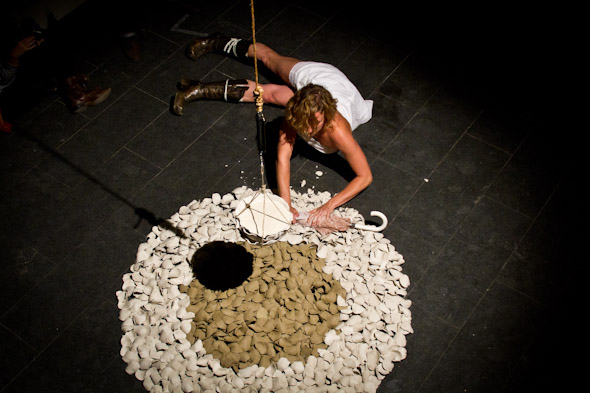 The gallery lights dim except for the spotlight on the sculpture and upon reaching it, she begins, first with the umbrella, then with her hands, then with the rest of her body and metal boots, to methodically crush the clay petals, each small destruction producing a satisfying crunch. She works her way around the circle, the action seeming at once effortful and pleasurable, arriving finally face up in the center of the mess, chest underneath the bowls. Using the umbrella to dip into the mixture she drips it over her body finally tipping the scale and pouring the viscous fluid over herself and then the open umbrella. Mixing the chalky debris with the thick wet concoction she uses her hands to roughly coat the antique umbrella before standing and slowly, either due to the weight of the metal boots or the gravity of her odd little ceremony, walking towards another sculpture. The lighting theatrically anticipates her arrival and illuminates her standing underneath the umbrella next to another sundress hanging from a coat rack. It is seemingly soaked in the same thick white stuff and dried but maintains the weight and the drape of dripping-wet textile. 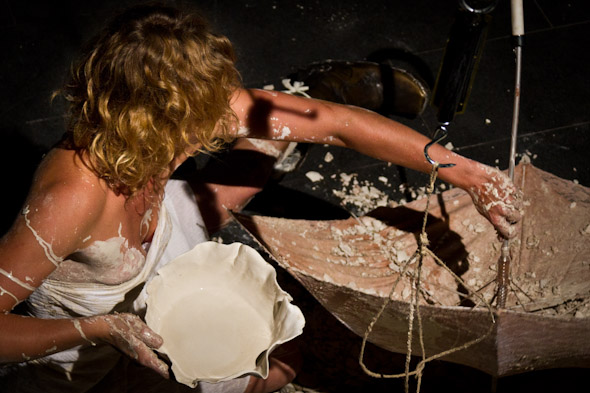 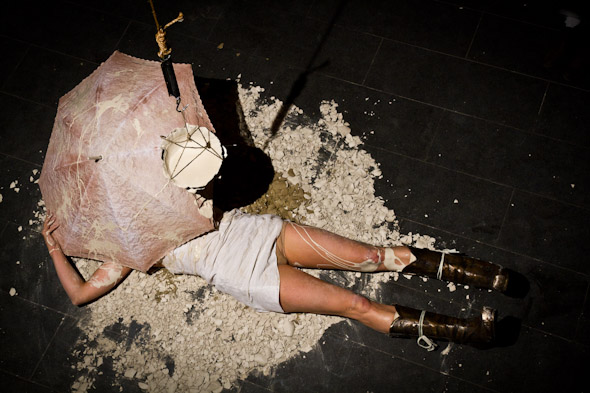 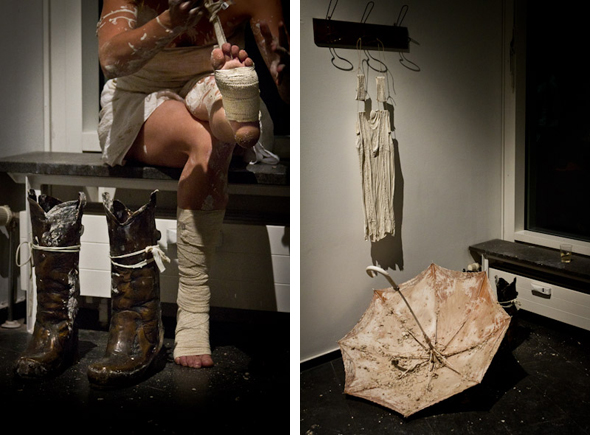 After some moments of reverie Fall sits, gingerly removes the heavy boots and smiles, letting us know she’s finished what she set out to do. And what that is exactly remains unknown to the audience. Fall’s relationship with us is a quiet one as for the duration of the performance she neither speaks nor invites direct interaction. As long as we are not in the path of her trajectory she seems content to have us there, silent witnesses to her actions in the space. She does at times confront us with her gaze as when she looks up from her work of crushing, gazing at us rather directly, almost daring us to intervene, to try and stop her from completing the circle, to maybe preserve at least a single petal…but we won’t. Fall has set the tone and even the children present know better than to make noise and besides we are all for it. I’ll admit to wanting to feel the crunch under foot. There is a pleasure in watching something precious or something endowed with preciousness corrupted. These clay petals have been clearly formed in the palms of hands, perhaps Fall’s own hands, the physical gesture of their creation repeated hundreds of times and within minutes their materiality approaches the condition of dust, clay before water, before the possibility of plasticity. The meaning of her ceremony perhaps lies in extrapolating the poetry to be found in the space between matter and objecthood and the processes enacted to render these states. As for the umbrella, sundress, and metal cowgirl boots, I suppose hot sun, dry earth, and rainfall come to mind but these seem to be theatrical accessories more than anything else. 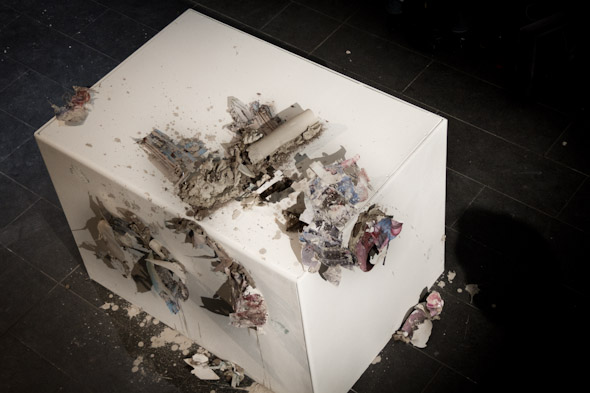 Whereas the mess Fall produces in her performance is contained and controlled, Madeline Stillwell’s threatens to wreck the gallery, herself, and even the spectator. All in all her performance is quite isolated in terms of space but safety does not seem guaranteed to anyone or anything present. A few steps away from Fall’s sculpture in the center of the gallery floor is another sculpture or something more like 3D collage comprised of cut photographs, metal scrap and wire tumbling over the surfaces of a waist-high white cube constructed out of drywall. From inside the box we begin to hear sounds, happy sounds of talking and singing, deranged maybe, but happy nonetheless. I don’t make out much of what is being said but I do hear something to the effect of “I’ll be out in just a few more minutes now!” We hear a muted ruckus then sawing followed by a persistent pounding increasing in intensity from within the box. Moments later a lilac-colored sneaker and the lower part of Stillwell’s leg clad in dirty tights with silver sparkles bursts through the side of the box. More noise and more commentary from Stillwell produces laughter amongst the audience members and a little girl clambers across the gallery floor to get closer to the action, attempting to see inside the dark interior of the box. The sawing and pounding continue and the other leg busts out with enough force to send little drywall projectiles flying towards the audience. 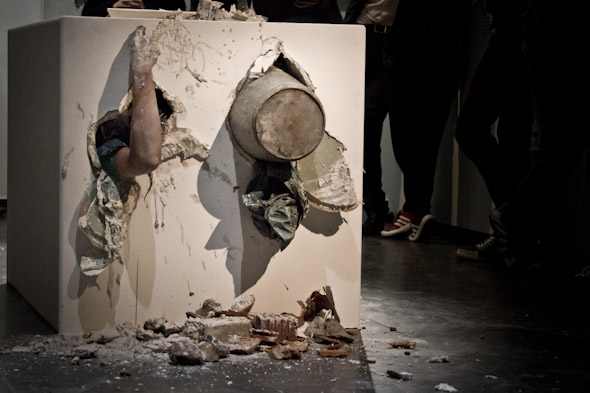 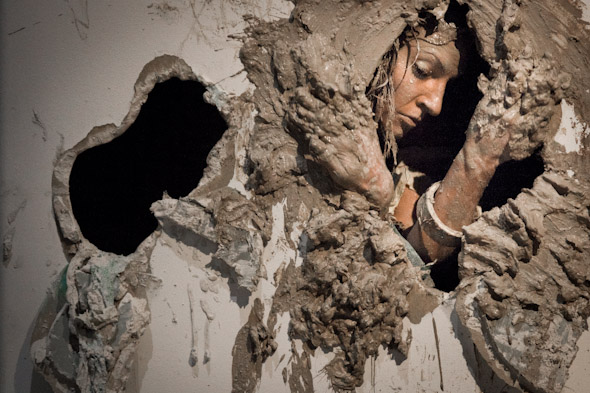 Stillwell accompanies all of this action with vocal sound effects and a broken monologue about the sun, great swimming, and massage with hot wax, hot rocks, and hot Latin men that can be enjoyed “out here” in the universe hidden from us inside the box. Stillwell’s performance style is camp and as she physically destroys the austerity of her white cube she manages to have the same effect on the atmosphere of the gallery. Stillwell retracts her legs and lubricates the craggy holes with what appears to be very wet clay. Through the holes she pushes out all manner of dirty stuff: clay, earth, broken masonry, its hard to tell really but it has wet bits and dry bits, textile and metal, paper and plastic. She continues to tear through the sides of the box, each breakage in the structure accompanied by the performance of nearly orgasmic release. “We’ll continue that later,” she says with her head thrown back through one of the holes, body writhing, before getting back to “work.” 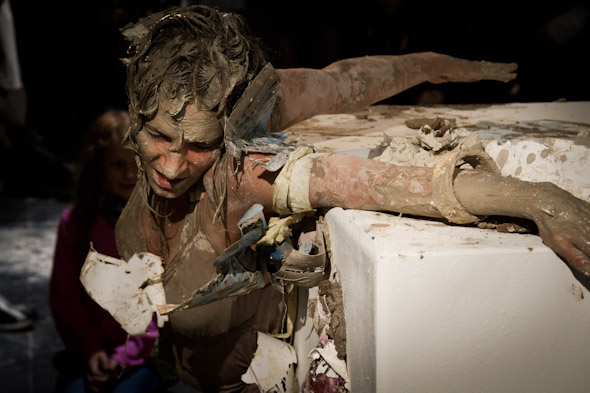 She launches on about sculpture, about how she is supposed to be making one but how does one make a sculpture when they are the sculpture? A horn honks outside the gallery and Stillwell, masterfully improvising, takes this sign as a response to her question. “Yes, turbulence, frustration…” It seems for Stillwell its all about the struggle of finding potential answers to open questions. What is sculpture in 2011 and how do we approach it? She may not have the answers but she knows its hard work, really hard work. Stillwell lives the artist’s struggle and at once makes fun of it. Pausing in a particularly awkward position she finds herself in while emerging from the box she exclaims, “Someone take a picture already! I’ve been training for this!” She continues her reflection on hard work stating ironically that if one works hard enough she should be able to go away to a better life, a tranquil life with no pain, no conflict. She deviates momentarily, an excited child showing off a prized possession, “Look at this awesome machine I found,” only to quickly cast it aside, “Let’s get back to work!” 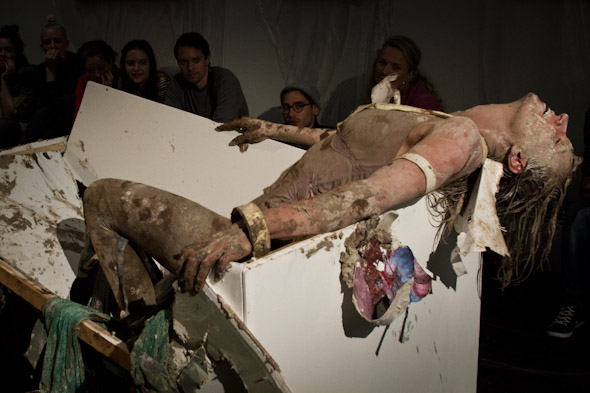 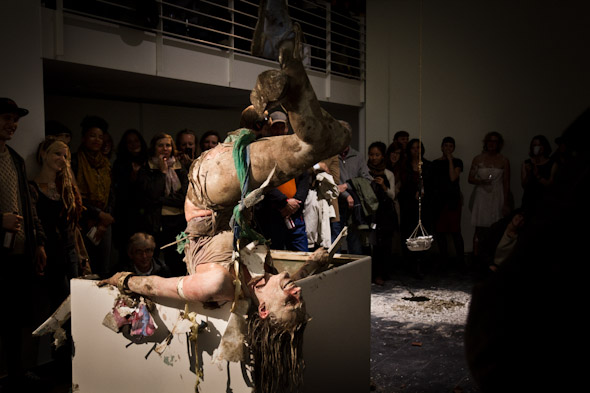 Getting back to work seems to mean finding the most complicated and inefficient way out of the box while intermittently wrestling with the heavy sloshing buckets and plastic bags of rubble inside to procure the muck and sludge and scrap that will adorn the new sculpture she is in the process of producing. Mostly sprawled over the exterior of the box now we see Stillwell is a bodily extension of her collage and sculpture work, metal and plastic detritus clinging to her smudged tights and wet torn t-shirt. Her hair and face covered in mud and clay amplifies this effect as she recklessly although nimbly mounts the nearly destroyed box, now a shaky pedestal with Stillwell on top. Much of her flesh is exposed to the harshness of the crude architecture she has created but she seems fearless, in some kind of rugged harmony with the material elements she works with. 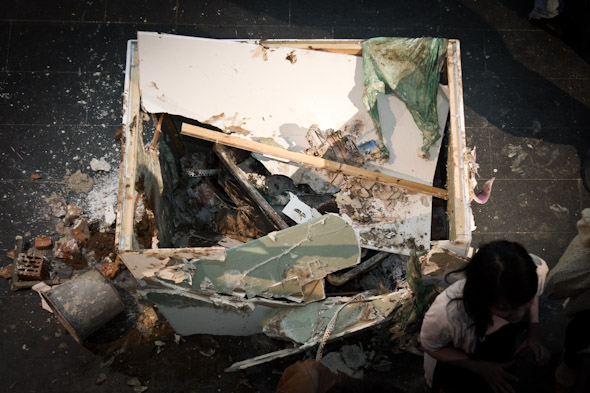 In closing Stillwell finds a nearly impossible balance on her upper back, legs thrust upward and the entirety of her weight on a single corner of the box’s frame. She sings an exuberant hallelujah in this position before thanking the audience. “I’ll bow with my legs,” she says before flipping backwards off of the corner of the wobbly structure. She has put herself through it and the struggles to escape the confines she’s created for herself both artistically and physically are evidenced in the mutilated shape left in the center of the gallery floor.

Isabel Lewis is a Brooklyn and Berlin-based performance maker, curator, and writer.