When most foreigners think of Iceland, their first associations are Björk, erupting volcanoes, and the recent economic crash. Many are unfamiliar with the thriving contemporary art and music culture because it exists almost exclusively within the close-knit Icelandic community of 320,000 people. However the new Harpa Concert Hall in Reykjavík, Iceland, designed by Danish office Henning Larsen Architects and Berlin-based artist Olafur Eliasson, has recently given international recognition to Iceland as a cultural capital. After delayed construction in 2006, there was much speculation as to whether this lavish building would ever be completed. However, the Harpa finally opened to the public this year with its official inauguration August 20th during Iceland’s annual musical celebration, Reykjavík’s Cultural Night.

The ambitious Harpa building is Iceland’s new concert hall and conference center that provides facilities for international art and music events. At 33 meters high and located on a main street near the harbor, it can be seen shinning all throughout Reykjavík because it is constructed out of 12,000 square meters of translucent glass. While the exterior reflects the cityscape, the spacious 28,000-m2 interior looks out on to the surrounding harbor and countryside. The Harpa is divided into four unique main halls that are each inspired by various elements found in Icelandic nature: the “eldborg ” (the fire castle hall), the “nordurljos” (the northern light hall), the “silfurberg” (the translucent calcite crystal hall), and the “kaldalon” (the cold lagoon hall).

While the interior design is simultaneously sincere and extravagant, the Harpa has received most of its attention from the luminous façade designed by Olafur Eliasson. Although the artist worked in his Berlin studio to create the plan, it was fundamentally inspired by the Icelandic geological landscape. The façade is made up of a three-dimensional steel frame and dichromatic glass panels that vary in size and color. These “quasi-brick” configurations are symmetrically arranged based on the golden ratio. Although this pattern at first glance seems traditional, the shapes of the individual bricks are unpredictably organic because they mimic basalt stone (a crystal indigenous to Iceland). Eliasson’s intent with this structure is to allow for the strong geometrical design to also create an intimate experience for the viewer; hence each glass brick is intentionally the same size as the human body.

The Harpa generates a similar resonance found in Eliasson’s notorious installation work: it enhances the individual’s sensory experience by relying on natural elements such as water and illumination. Employing both natural and artificial light, the façade creates a kaleidoscopic effect that shines and reflects the surrounding landscape. Consequently this play of shadow and color varies according to the sun: during the day the building is transparent and reflective while during the night it glows with the help from the LED lights that can individually adjust color and brightness. Because Iceland has a notoriously unique Nordic light that varies from 22 hours of sunlight in the summer to 22 hours of twilight in the winter, the Harpa also transforms dramatically with each seasons and weather condition.

Although the Harpa Concert Hall is sculpturally a visual spectacle, it remains politically controversial for many native Icelanders. The building is estimated to cost 1.5 billion Icelandic Krona (90 million euro) to construct. And after the 2008 Icelandic finical crisis, where the national currency and stock exchange severely dropped, the country is still negotiating with this economic struggle today. While some perceive the Harpa Concert Hall as an ostentatious structure representing greed, others regard it as symbol of recovery for Iceland. Regardless of its political stance, one can’t help but admire the intrinsic design and the glistening lights from the Harpa that reflect Iceland’s sky, harbor, and vibrant city- it’s truly mesmerizing. 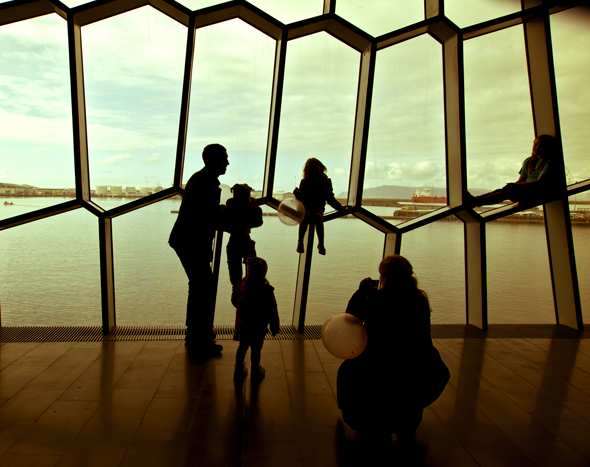 Gabriella Picone is a New York-based artist and writer living in Berlin. She received her BFA in Painting from The Rhode Island School of Design. She is currently teaching English and Fine Arts at The Dreilinden Schule, as well as working on an art series entitled Irrational Science.

HARPA
Visit Harpa’s official website for additional information regarding the new structure, including the official statement from Olafur Eliasson from the press conference on August 20, 2011.