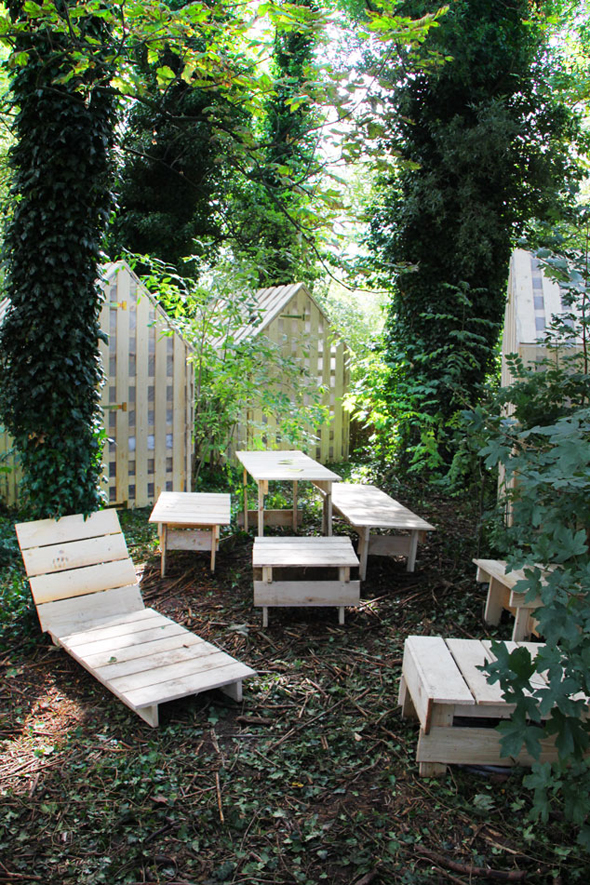 The collective Exyzt built a group of cabanas on an island in museum park at the end of Witte de With Straat. Visitors could rent a cabana for a night, complete with overnight kit and breakfast with the artists in the morning.

Art sought interaction during the Wereld van de Witte de With Festival in Rotterdam last week: interaction with the buildings, the street, indoor spaces and outdoor arenas, and above all, personal interactions between audiences and artists. During three non-stop days, the festival presented public works by over 25 young European artists specially conceived for Rotterdam’s Witte de Withstraat, incorporating events and exhibitions by 30 institutions surrounding the city’s art axis. 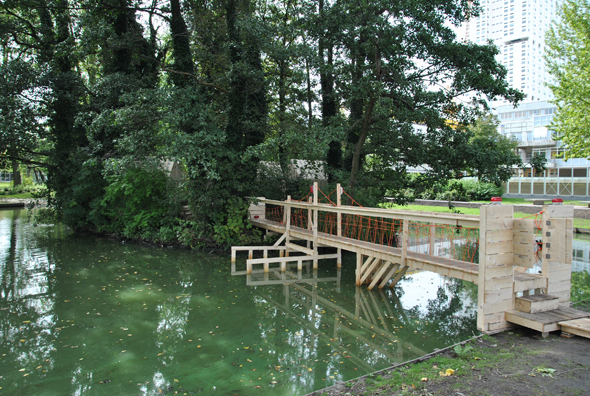 Bridge leading to the island in museum park, which housed the Exyzt cabanas. 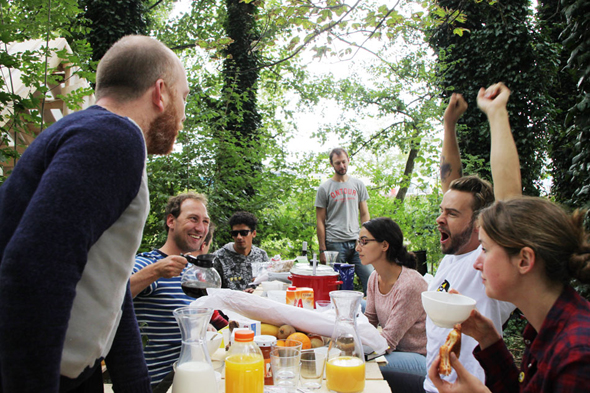 The morning after: breakfast with the artists at Exyzt’s cabanas.

This year’s festival theme, Victory of the Bottom-up Approach, suggested creative uses of urban space to undermine traditional hierarchies and power relations. Artists, administrators, and audiences collaborated and communicated at every step of the planning process and the festival itself. The festivities began on Friday with a fourteen-course banquet conceived by Swedish artist Jonas Liveröd, based Jorge Luis Borges’ “Chinese Classification of Animals.” After Liveröd’s opening banquet ceremony — complete with a performance by the local teenage baton-twirling team and a troop of Scottish bagpipers — the street was packed with people for three days straight. Lecture series, auctions, guided bicycle tours, and dance parties punctuated the days, and public installations by Dutch and international artists caused constant discussion on the street. From Franz Höfner and Harry Sachs‘ fantastic tipi built from construction site materials, to Bill Drummond (of KLF fame) building a bed in public, to Michael Johansson’s impeccably stacked furniture in the space between two buildings, the festival aimed to bring public spectacle back to the level of the everyday. French collaborative Exyzt built a 5-cabana village on a small uninhabited island in the public park at the end of the street, where guests could stay overnight and awake to breakfast with the architects. And at the other end of the street, a daily festival newspaper was hand-printed in a converted storefront. Many art projects were hidden in plain sight, and at a certain point it became unclear what had been planned and what had arisen spontaneously. 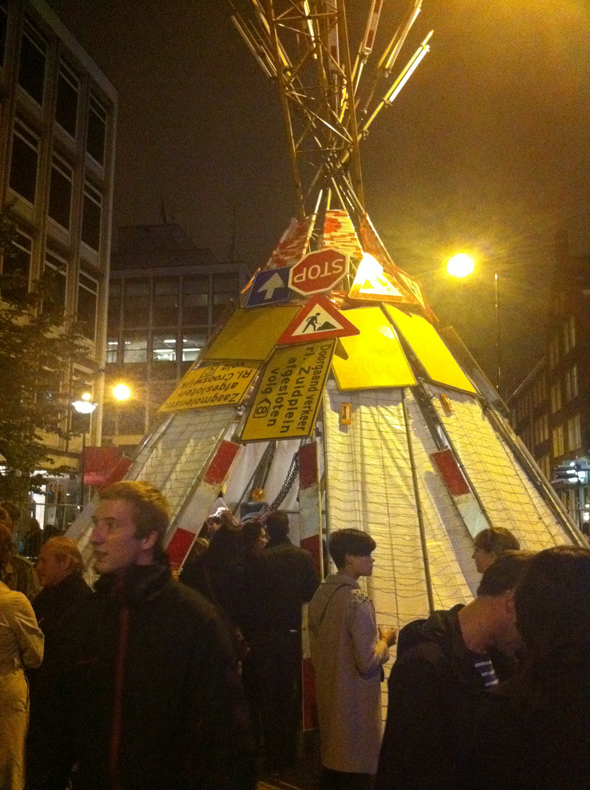 German artist duo Franz Höfner and Harry Sachs built a teepee out of construction site materials that musicians performed in regularly throughout the festival. 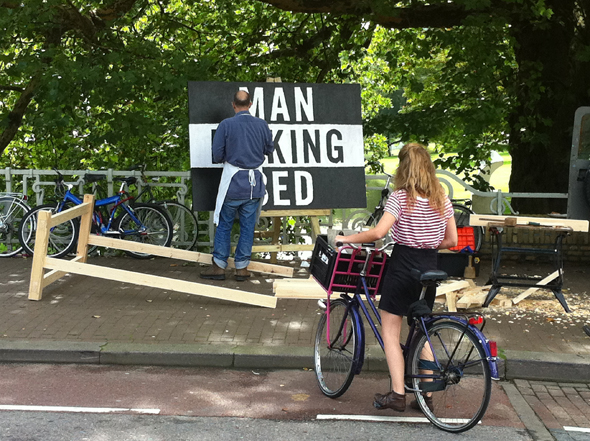 Bill Drummond of KLF fame spent the festival building a bed, which was raffled off and personally brought to the house of the winner. 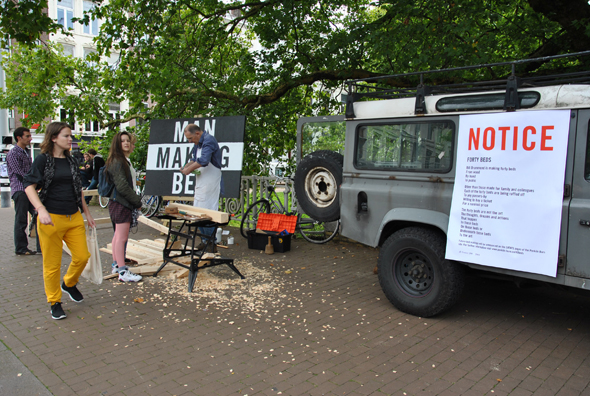 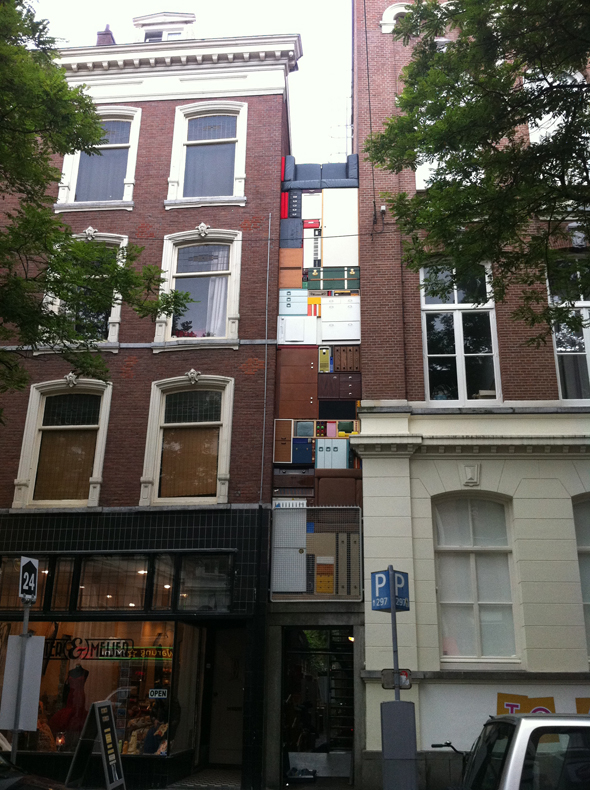 Elvia Pyburn-Wilk is an artist and writer based in Berlin. She received her BA in Sculpture from Bard College and is currently the assistant at Studio Lukas Feireiss, a multidisciplinary curatorial practice investigating the intersections between architecture and art. Elvia runs an experimental publication called EADERS DIGEST and her writing has been featured most recently in the book Testify! The Consequences of Architecture, which accompanies the exhibition by the same name at the Netherlands Architecture Institute in Rotterdam, Netherlands.