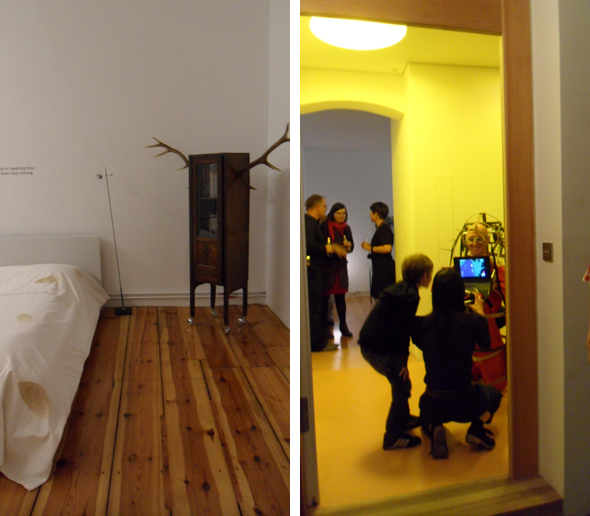 The current show at smartloft apartments&art is a reflection of a more and more common trend in the art world: the merging of art and architecture. And while this intersection is vastly exciting, with the potential to redefine the parameters of both disciplines, the group show of Bauen, Wohnen, Denken – Building, Dwelling, Thinking treads on the periphery of possibilities.

The entry into the project is quite rich: Martin Heidegger’s “Building Dwelling Thinking – Bauen Wohnen Denken” (1951) is the conceptual impetus for the project, and the common root for the nine participating artists. The idea of smartloft is to encourage a deeper connection to the visual arts through a more intimate, albeit domesticated, reading of artwork in their posh apartments. What I fail to see, then, is how this show creates a different reading of the architecture itself, rather than reinforcing contemporary living spaces as the ever-more-museal. This is not to take away from the depth, whimsy and whit of much of the work on display that were a direct result of the response to Heidegger’s text. However, save for the intricate drawing of Berlin’s trade wall by Anna Kostreva that was delicately embedded in the smartloft wall itself, the overall atmosphere of the show failed to cohesively bring art and architecture together in a more inquisitive way, rather than simply [dis]placing art in an apartment for transients.

Although Heidegger’s text couldn’t give more of a contemporary cohesion to the show’s take on how these two disciplines can come together, the questions it, and smartloft (through Thomas Arnold, Director of smartloft apartments&art and the American artist, kate hers) puts forward are inspiring to say the least, and the transforming of smartloft into a laboratory for such experimentation is key to driving this question of disciplinary intersection to a deeper place. 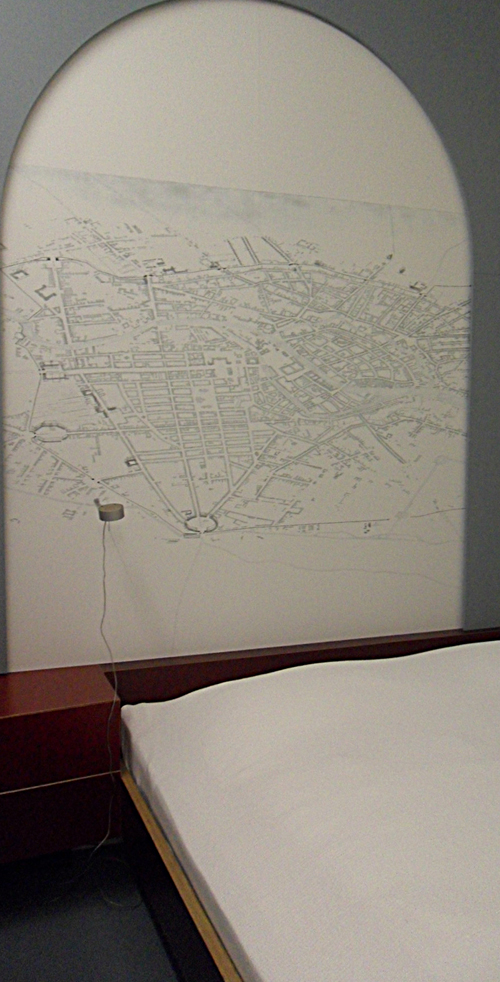 The essay “Building Dwelling Thinking – Bauen Wohnen Denken,“ written in 1951 by the German philosopher Martin Heidegger, is the springboard from which this new exhibition has been developed, considered, and framed. The exhibited works may or may not have a direct or obvious reference to this essay – this timeless text was provided as an inspiration to the artists to engage their works within our living spaces. Art challenges us to think. An artist´s opinions, reactions, and his or her world is uniquely expressed in artworks, often with relevance to society and politics. smartloft apartments&art believes that bringing art from the gallery into a private space allows a more intimate conversation between the work and the observer. Living with an artwork generates a different type of contemplation and introspection than the experience permitted at a gallery or museum. Not only are we intent in providing a resonant experience to our guests, but we are also interested in presenting artists the opportunity to show in our carefully designed apartments, and/or to create site specific work which then only belongs to this particular space and time. Furthermore, Berlin boast more than 6000 artists many of whom are international. These artists consider the theme of Building Dwelling Thinking-Bauen Wohnen Denken in Berlin and one’s relationship the space in which is changing through building, dwellling and thinking.