On a bright afternoon in late October, a group of strangers met at Berlin-Hauptbahnhof. Though no trains were boarded, everyone there had come for a journey. Editorial graphic designer Katrien Ligt stood at the center of the dispa rate bunch, each of whom was outfitted with large headphones that connected to the distributed audio devices. All were there to participate in Ligt’s most recent work, entitled With New Eyes, a city tour through the perception of blind individuals. And while the tour’s framework begins with reading the city through alternatives to the visual, With New Eyes achieves a sensory power in its searching for the line between seeing and not-seeing. Her search to define this fluctuating border ultimately leads to a question of subjectivity within the urban construct. How much of an individual’s reading of the city is dependent on the filtering and reconstruction of information, visual or otherwise? 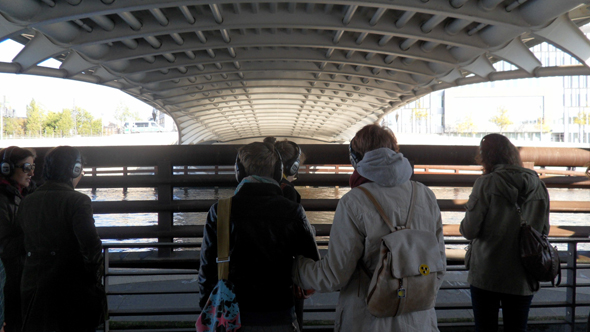 Katrien Ligt, who hails from the Netherlands, used Berlin as a platform throughout October of this year in order to investigate how structures, routing, way-finding and viewing effects the way a city works. How the city “works” is inexorably connected to its image and the consumability of that image. Sensory readings of the city are a significant part of Ligt’s artistic discourse, and With New Eyes is not the first audio tour that she has designed. Her previous audio-urban project, Ogen te luisteren (Eyes to the Ground), engaged the question of absolute visual inundation within public space. With New Eyes additionally focused on the act of concentration, and about the feeling of discomfort. In speaking about the relationship between these two works, Ligt notes that “the tour [With New Eyes] also deals with how public space is interpreted, [but] after Eyes to the Ground, I started thinking more about what happens when you are even more restricted in how you experience your environment.” 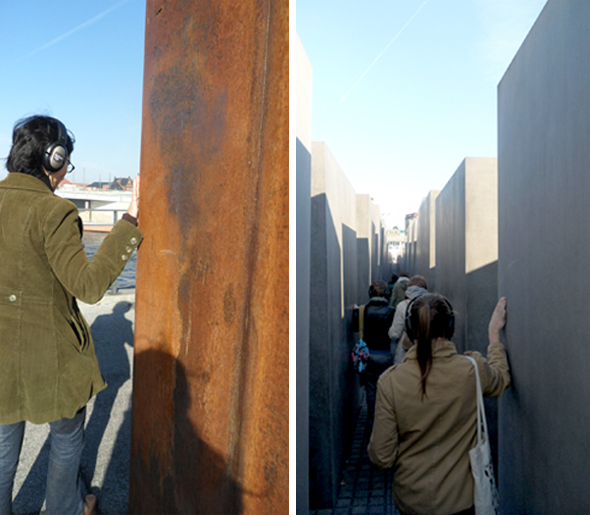 Restriction is a large part of With New Eyes. The structure of the tour follows the contemporary framework of a tourists’ walking-tour, where Ligt leads the troupe through the route that she has choreographed. The path of the tour hits many of the major centers of Berlin-based tourism, including Hauptbahnhof, Platz der Republik and the Reichstag, the Brandenburger Tor, the Denkmal fur die emordeten Juden Europas, and the Quartier 206 shopping complex on Friedrichstraße. However, Ligt uses the perceptual shift from the emphatically visual to a total-sensory experience in order to deny participants the expected readings of these sights. After all, they are not just “sights” for the pure act of “sight-seeing” anymore. Ligt transforms these spaces, which act as experiential proxies for the city, into porous networks of texture, light, and echo. 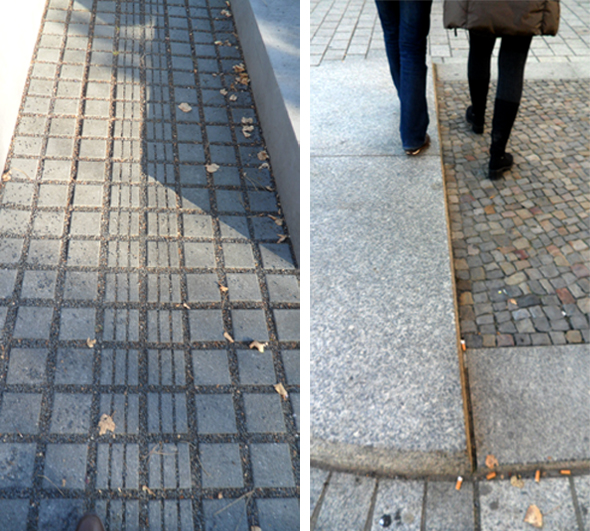 This transformation happens as a result of two factors: Ligt’s design of paths and pauses (which was devised through working with blind Berliners and how they access the city), as well as her choreography of the sound that all participants key into throughout the duration of the tour. The audio component has been carefully designed to collage two different narrations of the city-space that the tour moves through: one ear plays the prompts that blind walkers need in order to find their way safely, while the other has a loop of Ligt’s sensory references of the sites (starting with the very visual, ending with the more smell-, hearing-, and touch-based descriptions). Herein lies an inherent temporal disconnect within the project. While a participant is fully engaged with the audio component of the tour, he or she loses the opportunity to fully hear the real-time sounds of the city. However, this disconnect brings a great deal of emphasis for the strategic pauses that Ligt inserts throughout the tour. At these strategic moments, participants are instructed to remove the headphones, close their eyes, and return to a very immediate sense of place. 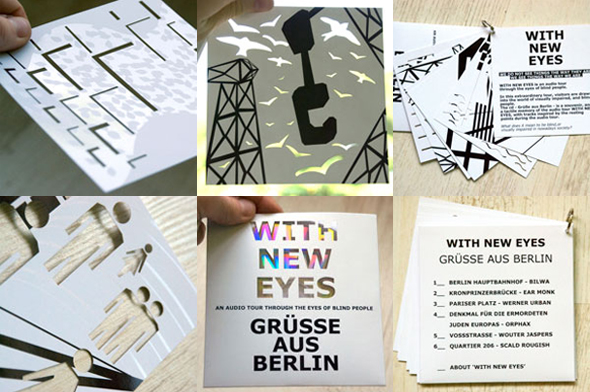 Ligt ended the tour with the potential of memory. All the participants were given a booklet and CD that re-imagined the form and function of traditional tourist memorabilia. The CD, Grüsse aus Berlin, was a collaborative effort between Ligt and six different musicians, where the final tracks were musical translations of Ligt’s recordings from the tour. At the end of the entire experience, it was curious to remember that Ligt is a graphic designer. But then again, coming from a discipline that is rooted in the construct of the image, Ligt would have the potential to create such a visually sensitive project. Perhaps one doesn’t end the tour with a more empathetic understanding of the blind, rather there was a greater cognoscence of sight and the power of what we constantly see.