This Wednesday, November 30th, the launch of Romeo Alaeff‘s newest publication, I’ll Be Dead By The Time You Read This, will be launched in New York City at Power House Arena bookstore. The animal characters, originally born out of Alaeff’s Evolution of Despair series, are paired with darkly humorous text allowing the viewer to project upon them the often dark internal commentary of emotional despair and self doubt that we too commonly inflict upon ourselves as human beings. A turtle says, “I’m damaged goods”, a giraffe; “I must be in denial” and a goldfish; “I feel like I’ve been holding my breath forever.” By presenting the idea of animals having such complex and tragic emotions about relationships and existential angst, the viewer is left with the realization of the contradictions and absurdity of these common remarks.

About I’ll Be Dead by the Time You Read This (from press release):

Let’s be honest: people have issues. You’ve undoubtedly realized this while eavesdropping on conversations, talking to your friends, or listening to your own thoughts. But nobody considers the possibility that animals have the same existential crises…until now! Romeo Alaeff, an internationally exhibited artist, was inspired after writing down the many seemingly irrational things he’d overheard said by people and that he himself had felt. With a unique combination of anthropomorphism and irreverence, Alaeff shares what the range of human emotions would look like through the eyes of animals in I’LL BE DEAD BY THE TIME YOU READ THIS: THE EXISTENTIAL LIFE OF ANIMALS (Plume Original; December 2011). 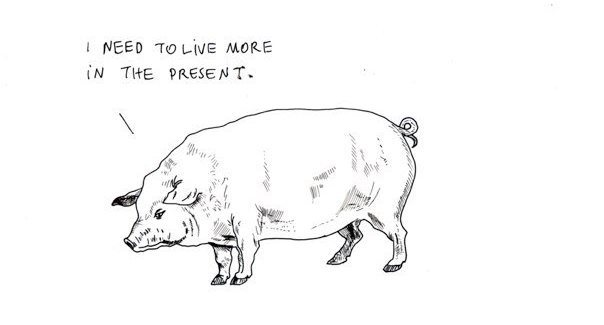 Originally part of his project “The Evolution of Despair,” and featured in the book Stuck up Piece of Crap: Stickers: From Punk Rock to Contemporary Art, Alaeff’s animal drawings explore the hilarious and heartbreaking neuroses that overwhelm humans. In I’LL BE DEAD BY THE TIME YOU READ THIS, Alaeff compiles his gorgeously drawn animals that have thoughts and outbursts as insane as ours. Alaeff’s unique images with their ironic sensibilities truly showcase his ability to point out the idiosyncrasies of the human experience.

Reminiscent of Andy Riley’s darkly amusing The Bunny Suicides, Alaeff captures the sentiments which make us distinctly human and highlights their absurdity.

“The animal drawings in this project explore the tragicomic human predilection for negative and often destructive emotions. Although these emotions might have had, or still might have, an evolutionary imperative, it often seems as though they are out of proportion and/or misaligned with any modern need for survival. Animals clearly have a wide range of emotions, however, it’s funny and sad to imagine them having ones as insane as ours. ”
Romeo Alaeff discussing his “Evolution of Despair” series 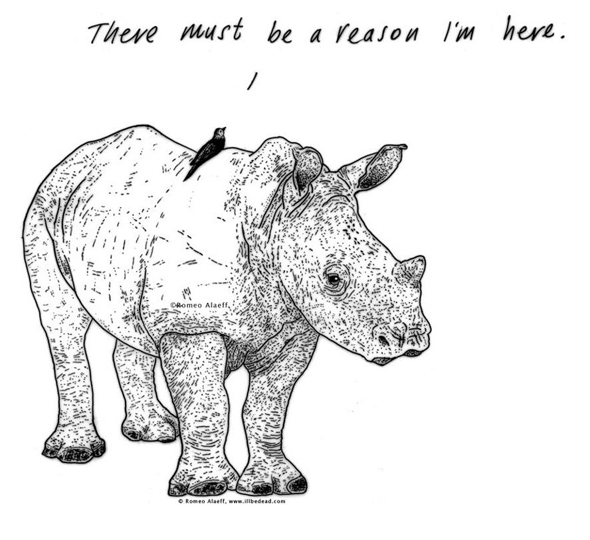 POWERHOUSE ARENA BOOKSTORE
Book Launch: “I’ll Be Dead By The Time You Read This”
Date: Wednesday, Nov. 30; 7-9pm
37 Main Street
Brooklyn, NY 11201
*Original work by the artist will be on display and special edition prints will be for sale.