Peter Böhnisch and Wolfgang Ganter met in 1999 when they began their studies at the Akademie für bildende Künste. I was introduced to the artists in 2007 and have not seen a more respectful pair of friends who stand on such different ground characteristically. I spoke with the guys over Sunday dinner in November.

Melissa Steckbauer: Wolfgang could you talk to me about Peter’s work? Could you describe it to me as though I hadn’t seen it before?

Wolfgang Ganter: That will exceed every interview because I know Peter’s work very well, from the very beginning at the art academy until now including all of his experiments, the struggle, and the on-going practice. But I can talk about Peter’s work now to make a long story short. Peter’s work is now mainly two-dimensional. He started not so long ago actually—ah it’s not so easy to—because he starts with the material but that’s not what it’s all about. The work is not so much about what is there as much as what is behind it and what comes through it and what comes with it while you look at it. It’s more about transcendental issues. Oh it’s really hard to talk about that because it’s not finger-point art, not at all. It’s very playful, very virtuous. When I look at it, I realize that there’s a lot of thoughts behind it, a lot of places it wants to go or where it’s going. I think for a lot of people it’s very different because it’s so subtle. Not forcing something onto anybody. It looks very free and often very easy but it always looks very right when I look at it. Of course there are pieces I like more, other pieces I don’t like, but in general I like a lot of pieces a lot of the time. 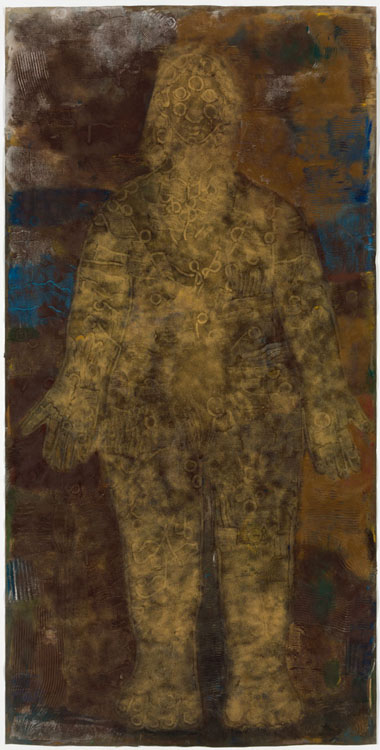 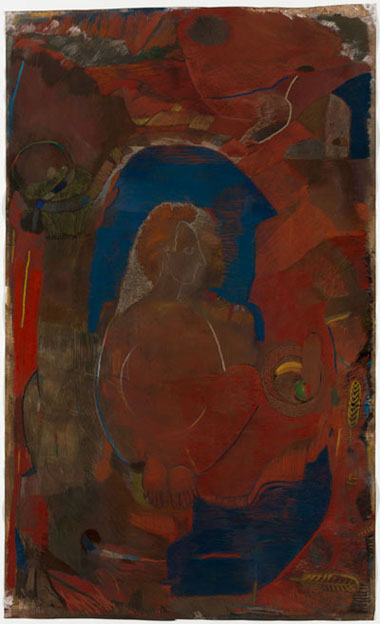 As for the materials, that’s easier to talk about. Lately most of the paintings are on canvas with pigment. First, there’s a layer of painted color and then he pours pigment directly onto the canvas. He works with several techniques using the pigment and in the end it’s all fixed with acrylic binder. This is one way he works and another way is with hot wax in little boxes, in which he makes reliefs: these are the main processes. There is also a little bit of sculpture, not so much, yet, or not anymore because he used to do more. He used to make performance and video and all kinds of things; he’s tried a lot of approaches. Which I always like because a lot of people find a thing and they just continue doing that until the very end, even though they are not interested in it anymore, but there was some success and then they ride that wave until the boring end. So Peter tried a lot and I like that. The work is not so easy in terms of content. It’s open to a lot of interpretation but at the same time you feel that there is something there you are forced to understand. 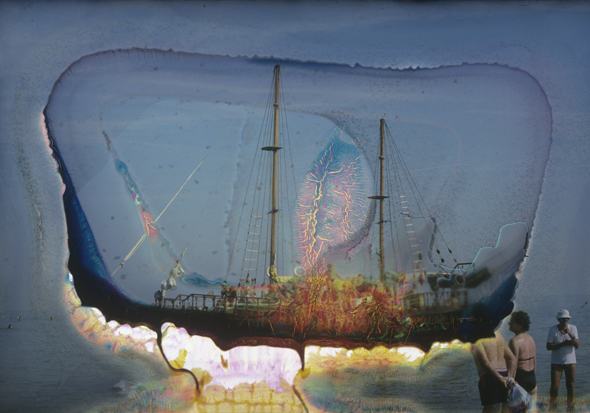 Wolf, you once told me that Peter is one of the best painters in the world.

WG: It’s hard to say because I know him so well and we’re very good friends. He’s a very important friend for me. With that in mind I can say that he’s one of my favorite painters. I especially like the little works on paper, they are for me still the strongest things I’ve seen live. Right now things are a bit faster, a bit more the same, still good, but I love the old ones best, the ones from 2-3 years ago. 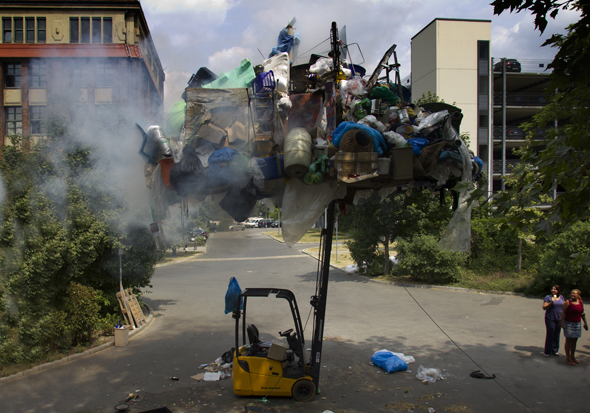 And Peter, could you say something about Wolfgang’s work?

Peter Böhnisch: Ya, Wolfgang is also a really, really good friend of mine. I can learn a lot from him. What I admire is–I don’t know anyone who is so committed to work or gives so much of himself to his own work like Wolf. That he is able to totally concentrate, to be totally there in the present moment. The work is manifold, the spectrum ranges from sculpture to video, performance, painting, installation, and photography: everything is in his work. It has a lot to do with a love for the visual world…He is always growing, he doesn’t stand still. The work is also complex concerning its content. You can find serious things, irony, humor, and political ideas; there is again a broad spectrum. I like that he acquired all of his techniques and knowledge by himself, not through course work. Sometimes he asks other people for help but he is searching to get better and better on his own.

I like that Wolfgang gives a lot, he helps other people, and he is able to receive. He’s grown a lot and that’s wonderful, he’s changed. I really admire his work–not all of it, some works I like more than others–that’s normal but as a person I can learn a lot from him.

WG: We can learn a lot from each other—which we are doing. It’s funny, we are living for such a long time together–

PB: – and we are very different.

P: It’s funny because in the course of our long friendship things changed and we became closer. It was close from scratch, but it changed and got even closer.

Melissa Steckbauer is a visual artist and writer based in Berlin. She studied art history at Utrecht University and fine arts at the University of Wisconsin-Madison where she received her BFA. She is featured in Berlin Art Link’s Artist Studio Visits and a review of her work will be published in the September issue of Revue Monstre.