When first walking into June 14’s studio, there is a dynamic spatial condition that one must negotiate. The most prominent figure in the main space is the library, a term I use loosely as all of the books are just carefully stacked on the floor in the center of the room. “Walking around” the studio isn’t some leisurely way to take account of this young architecture firm, but a circulation that is demanded, as the center is completely uninhabitable. “Obviously, we just don’t have bookshelves,” June 14 co-founder Sam Chermayeff remarked when asked about the library. “But what’s really nice about it is that it emphasizes the edges of the room. There is no center, [rather], there is no occupying the center of the room for us.” And for June 14’s architecture practice, this makes total sense. Their wide range of projects engage the limits of spatial inquiry. For example, bringing the space beneath the stage to the same hierarchical level as the stage itself, as with their collaborative project with Lynne Marsh at Program, The Philharmonie Project (Nielsen: Symphony No. 5); or foregrounding materials that are usually hidden within everyday objects, as with their current work for the 3M headquarters in Minneapolis). 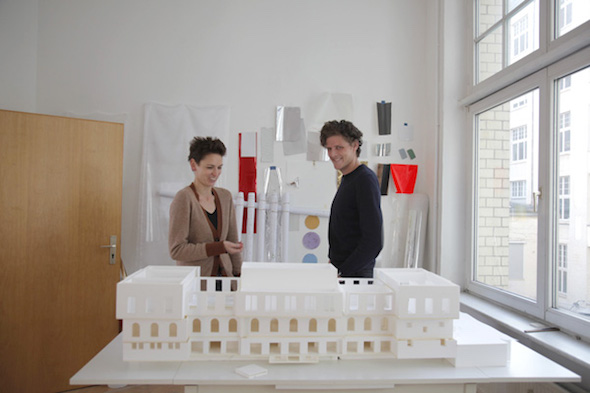 Founded on June 14, 2010 by architects Johanna Meyer-Grohbrügge (Germany) and Sam Chermayeff (New York), the name is more than just the studio’s moment of conception. The very act of using a date as a name for an architectural practice is a groundbreaking one. While so many offices in the discipline gravitate towards a declaration of principles’ names and obscure acronyms, June 14 grounds itself in a sensitively time-based context. Their name is also a calendar-marker: every year they open their studio to host a party on June 14. 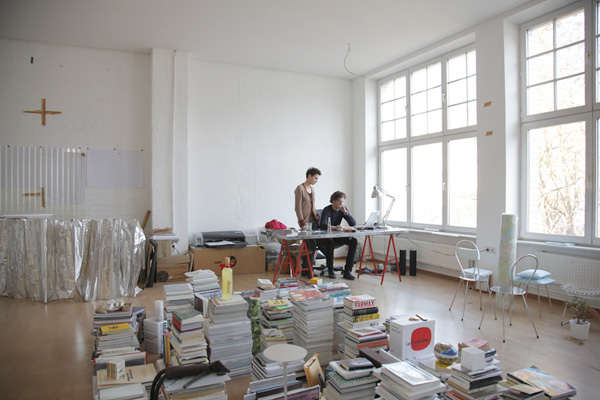 This open and connective ethos is palpable within the entire June 14 studio, and it is something that the office would like to continue to cultivate. Groups of students are invited to collaborate with the team for a couple of weeks at a time, and while developing the design for The Philharmonie Project, Lynne Marsh spent a lot of time with the team working in the studio. However, the traditional client-architect relationship is something that June 14 is still hoping will open a bit more. To have clients, especially larger-scale and corporate clients, be a larger part of the design process is certainly an on-going process. 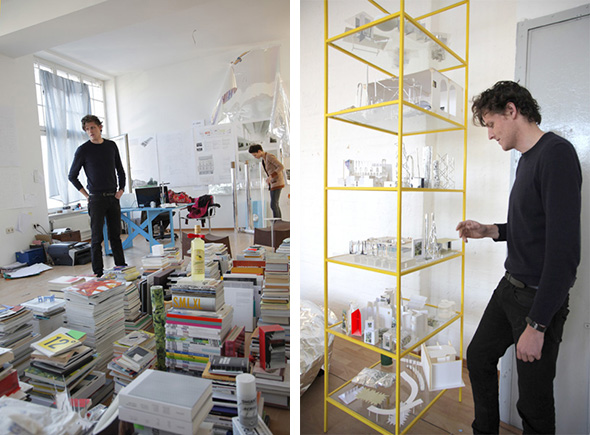 Within the studio and the individual projects of June 14, there is this playful recombination of the tectonic elements and items that signify certain expectations, be it material, social, or habitational. Beside the book-city library stands a tower of yellow shelves that houses a host of models and fragments of models from over a dozen past projects. But when asked how many projects are represented on those shelves, June 14’s immediate answer was “endless.” For Chermayeff the tower of objects represents the office’s joy in puttering around with things that have great, but as of yet undefinable, value. And with time, the things one makes transform, not only perceptually, but in relatinon to their changing contexts. “Sometimes we come and look at this little vertical world and we try to put the things that we kind of like and have saved together,” Chermayeff says of the model tower. “We can pick one [model] up and think, ‘Ah, what was that idea?’ But none of them exist by themselves. And they start to take on different meanings just by new associations and distance of time.” 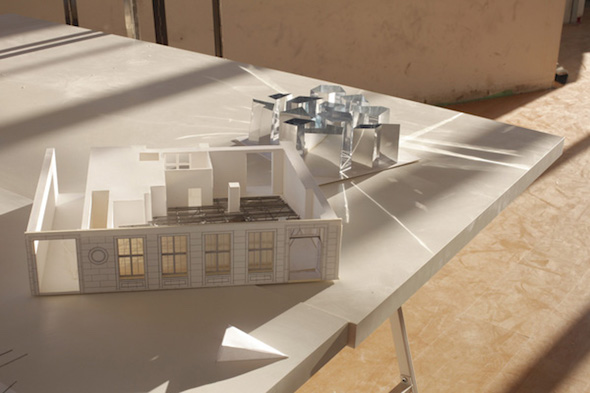 Before establishing June 14, Meyer-Grohbrügge and Chermayeff worked and met at SANAA (the architecture practice of Kazuyo Sejima and Ryue Nishizawa) in Tokyo. Their combined ten years of working at SANAA’s office has had a great influence on the way they run June 14. “Of course, everything we learned about professional practice we learned there,” Meyer-Grohbrügge said. “But also how we work is very connected to the work strategies at SANAA. We always leave a lot of doors open for our projects, we make lots of alternative schemes, we make thousands of options…Plus our office dynamic, a ‘controlled chaos,’ is very similar to the office culture there. We give ourselves and our staff a lot of freedom. We don’t tell each other really what to do, so we can all find our place. Of course, design-wise, we are finding our own way.” 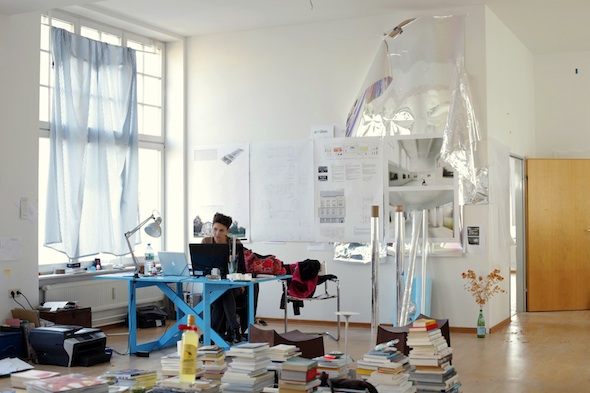 This “controlled chaos” is evident throughout the studio: in the library, in the tower of disparate, small models from over a dozen different projects, the full-scale mock-up of the Bridge for Thomas Demand. The chaos is not only evidence of, but also seems to support the freedom that Meyer-Grohbrügge referred to. The second part of the studio, the model area and kitchen space, is littered with the the evidence of this creative energy. Mock-ups of different semi-transparent materials hang on the wall and from the ceiling; schematic models crowd the surface of the worktable; a whole host of tools occupy the wall next to the kitchen area. Here is where their invited students can work on a large-scale site model, where the team can have a cigarette and come together to discuss their individual thoughts, fix a coffee and take a break to look out of the window onto the hof below. 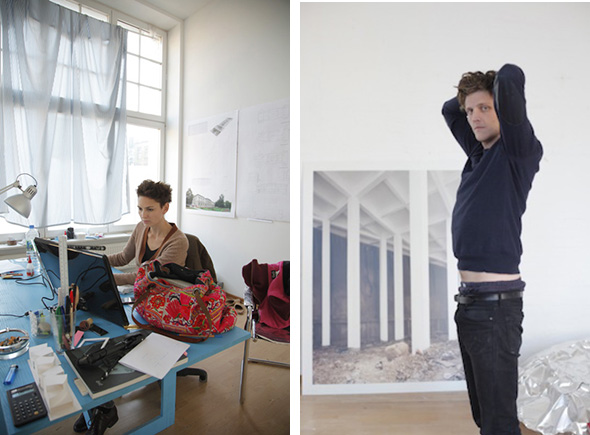 And it is possible that June 14 will stay in this studio space for a long time to come. Located in the heart of Kreuzberg near Moritzplatz, there is a good balance between pensive isolation and connectivity to the diverse community that surrounds them. Between the brothel, the production company, the occasional nightclub, and the sewing school, the June 14 studio sits in a real cross-section of Berlin. However, there is a complex relationship that the studio has with its Berlin home. As of now, the office has no specific projects planned for the city. The hope is there, to build on a Berlin rooftop, to fill an alleyway, but it remains speculative. And then there is the New York connection. While the studio presents itself as a bi-city office, between Berlin and New York, their New York presence is currently more hopeful than actual, an anticipation of a future connection between two very different, but increasingly connected cities. As the practice grows, along with the scale of their projects, New York could become more of a fundamental location. 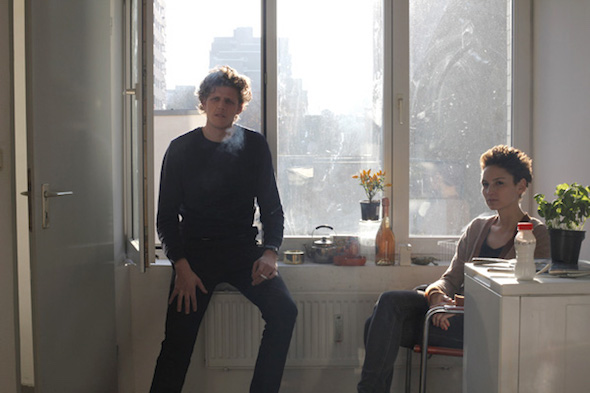 Berlin remains a comfortable, natural base. Here is intellectually stimulating and rich with creative peers, and a city from which they can project out. Most of their projects, they say, come from the fact that they are based in Berlin. And the possibility for a more open practice exists here, the option to create a bigger community, to bring people in, and to project innovative work out.

“The job of an architect is to find something wonderful in the given conditions.” – Nishizawa-san, former boss of Meyer-Grohbrügge and Chermayeff