Spartacus Chetwynd is a British performance artist, renowned for her surreal, opulently baroque performances. Chetwynd’s work references themes running the gamut from Milton to Star Wars. Currently, she is exhibiting a series of Monoprints at Galerie Giti Nourbaksch, the last exhibition to be shown at the gallery which will close in March 2012. Berlin Art Link caught up with her to ask about the work she is showing, and their relation to her performance practice. 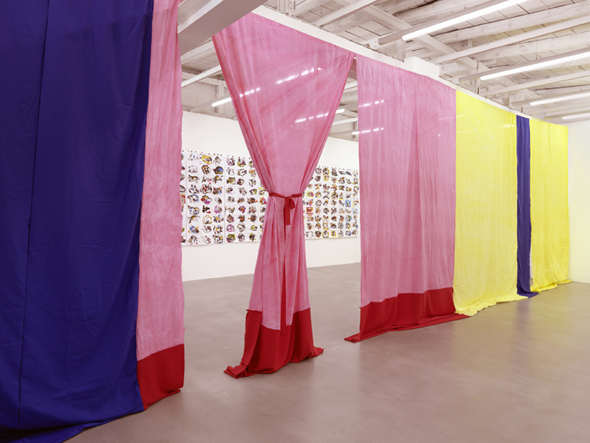 Jeni Fulton: Tell me about the pieces you are showing at Giti Nourbakhsch – they are all known as Untitled?

Spartacus Chetwynd: I left it untitled intuitively, as there is more space that way. The curtains seem to be called ‘back drop’ when I call them curtains, and the paper strips I was calling ‘backdrops’ are being referred to as Monoprints which is perfect.

What process did you use to make the prints?

I was using water based paints, you can buy them in craft shops or they are referred to as ‘children’s paints’, and some acrylics mixed in too so the paint should be permanent, I used paper you use for basic printing or writing. It does matter to me that the show cost very little to produce, I really enjoy making things happen for a low budget. I live in hope that this does not limit the work to be ‘base’ or low in itself. 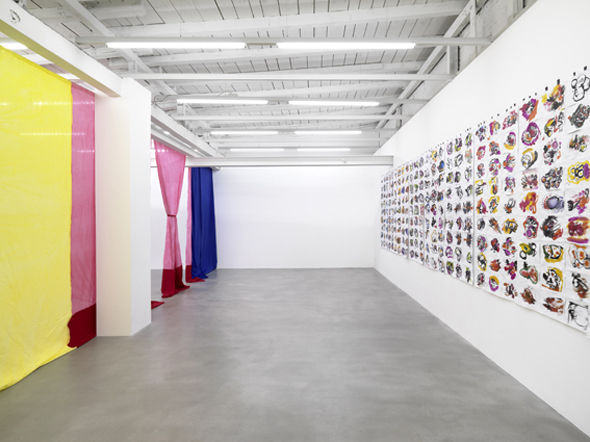 And about the work process?

The pieces are mono-prints meaning one time, one print. You paint something, say on a slippery non absorbent surface, then you place paper down onto it and print. The process only produces that one print. If you print a second time the image is faint. It is free and fun to do, a lot of accidents happen and you can become very involved and absorbed, almost in a trance form trying to experiment with minute possibilities within the colour choice and gesture of mark making.

Was there a particular motivation behind the 3×9 arrangements that the pieces are hung in?

I organized the prints into strips of 3 by 9 as they seemed to work in referencing a coded language, like Mayan hieroglyphs, but also somehow they seemed to be like puppets, as if all the puppets I have made are represented in a flat format as if they are engraved on the wall, almost as a unified portrait.

What role do the curtains play?

I wanted to chop the space up, a simple architectural urge. I thought it would be good to present the prints on the one long wall, the curtains would exaggerate the bank of windows opposite. I made the curtains at home in the bath tub they are a mixture of hand died and bought machine made fabrics. I wanted slabs of colour like a Mondrian abstract, at the same time they are also referencing some ‘alternative’ culture like living outdoors. The mixture makes me think of the ‘Folding House’ I made for BAS7, it is a mix of ‘De Stijl’ meets ‘adventure playground’. 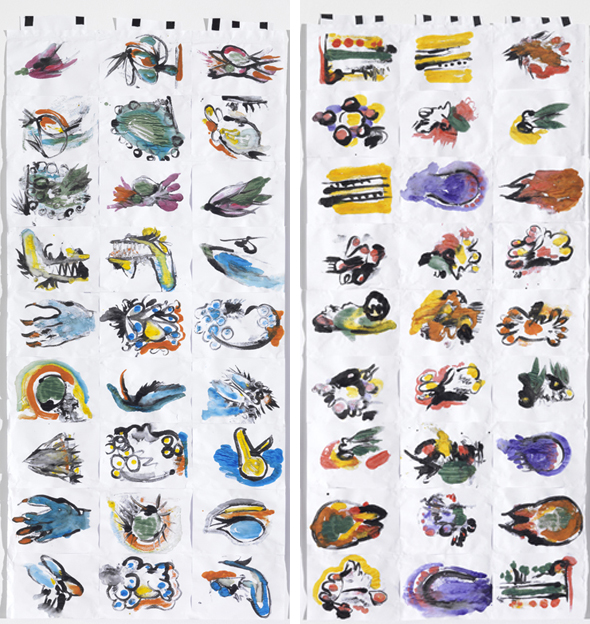 Are the pieces an installation, so one whole, or two pieces in dialogue with each other?

Two pieces in dialogue with each other sounds great, it sounds really animated. I have a feeling I wanted to make inanimate work that could seem some how animated.

Are you going to continue making mono-prints, the way you worked on the Bat Opera series of paintings over a number of years?

I am still making Bat Opera paintings, I love them very much! I want to produce a book like a flick book that has all the paintings printed the size they are 15cm x 20cm in colour with no text. There are about 250 of them so far, I wonder when I will stop painting them and make this book? I have made Monoprints off and on for about 15 years, since I came across the technique on a printing course. I made these works especially for Giti’s gallery, I have no idea what will happen next, if I have them all returned to me I will make them into a screen or set for a performance, I see them as a backdrop. The curtains I would most likely cut up into costumes, recycle them or use them again as a way to divide a space. I think they work in silence as a show.

How do these pieces relate to your performative praxis (if they do?) -I was thinking about this because you once said in an interview (I think for Frieze) that your performances were very gestural, very in the moment, and that you wanted to burn the costumes afterwards, and printing/mark-making have very different histories and associations to performance.

Interesting question! I do not think I am out of kilter with my usual way of being, I am as usual finding myself doing something that is totally unprepared and immediate. It is different to the history of achieve worthy engraving. When you are talking about Mono-printing it is really in keeping with spontaneous gestural art, it is really a performative way of producing an image like action painting. 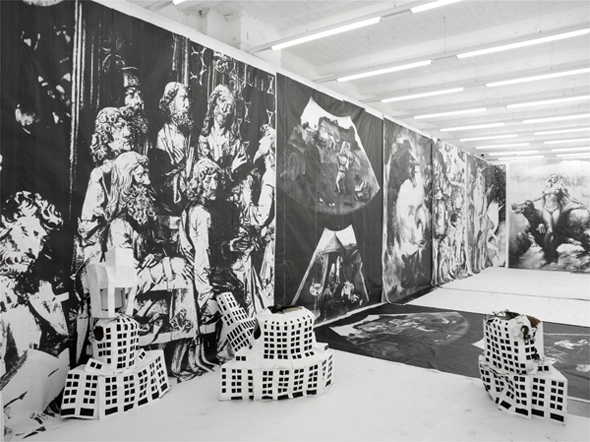 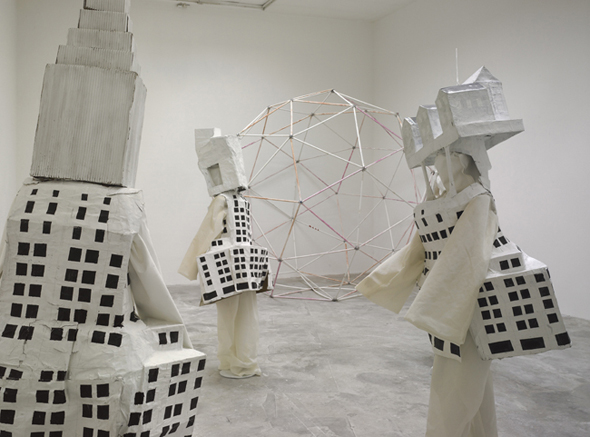 You said in response to David Lillington’s remark in an interview that “It seems like without some kind of social idea behind your pieces they cannot work” that this context or ideology informs your pieces. Is there a social context to the curtain/monoprint arrangement at Gitis, and if not, what was?

I like to work in different ways, with paint and things around me, not having to interact with the group for a change is really beneficial. The performances are very concentrated and high energy. I have to include group problem solving. For the current show at Giti Nourbakhsch’s gallery, I wanted to make a show that was from a quieter place but that still had a lot of ‘Lust for Life’. The performances come from researching exciting times in human history such as William Penn’s Pennsylvania. I will research and research and suddenly be hit with an enthusiasm and desire to make something happen. For example I would like to make a cross cultural historical analysis of William Penn and Jim Jones of the People’s Temple. However the painting work I make is really less uproarious, it can be research based but it is self contained. I am not opening the discourse to a group of friends for feed back and then working with the group confirmation. It is made without effort and I can see where it comes form only after making the work. I think I am saying it is more irresponsible! 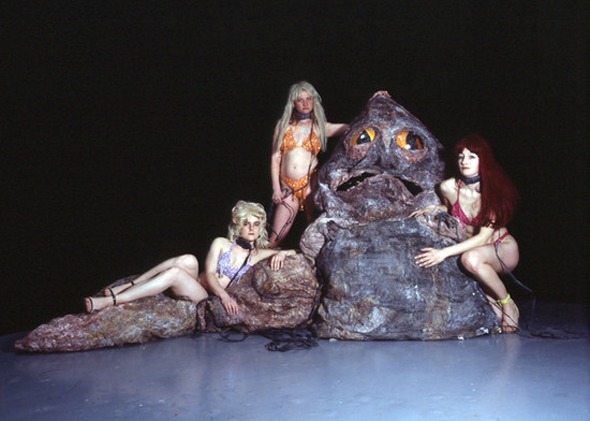 You participated in the Tate Triennale in 2009 – I was wondering how you feel about the curatorial work now (Nicholas Bourriaud’s Altermodern concept) and whether this is something that still has any relevance?

I Loved the ludicrous grandeur of inventing a term.. ‘Altermodern’ it appeals to my sense of humor, I think you have to have one when it comes to a self conscious post modern auto-reflexive wonderment such as ‘Altermodern’. Like ‘Alice in Wonderland’, ‘Altermodern’ is enjoyable and to be lost within, I don’t feel quite like saying it has serious clout as a concept, it feels more like a fun piece of the jigsaw. I wonder if I am contradicting myself to say, I take it seriously but within the frame work of contemplating it I have a sense of flamboyance. I like French curators..bring it on! 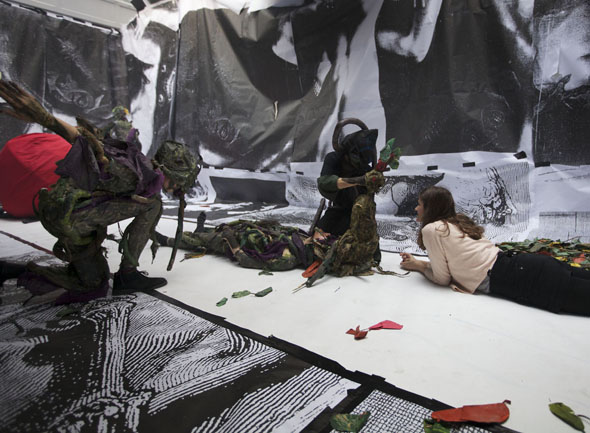 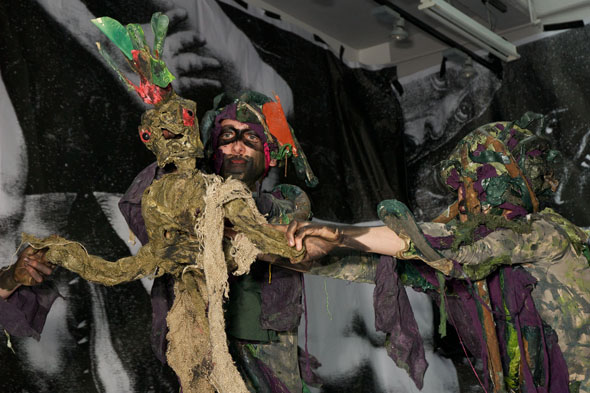 It is a difficult question. I am used to being dismissed as ‘bad’, abysmal’, school-play’, amateur and ugly. Oddly when I really look in the mirror of truth I accept all those terms. I think half the problem is I am not afraid of doing something ‘bad’, or unprepared in public. I think the generous audience member sees this as ‘refreshing, ‘Punk’, alive, and treasures the breathing space in a professionalized life style where everything is accountable. I can back up my defence by referencing ‘Rabelaise and his World’ by Michail Bakhtin, and Michel De Certeua ‘The Practice of Everyday Life’, I can spend a lot of time explaining how I have developed my working approach form studying anthropology and fine art and through maintaining a sense of Marx Brother’s irreverence’ But…The audience who is disappointed by the informality desires a level of skill and strain of effort to be visible. They do not recognize that the artist has made everything herself and by hand, at a low cost to the economy or if they do recognize this they don’t think it is of merit. Whether they are New Yorkers or Europeans – You can’t please everybody! I think the responses to the show in New Museum are the same as I have had for the last years or so. Some are celebratory and others are dismissive. I feel confident that I will always have fun and make things happen, and I enjoy finding exciting spectacles around me like a group of motorbike gangs practicing stunts in a car park on a Sunday. I was an audience to this just yesterday and I recognize I have no quality control between seeing the stunts of guys in a car park and watching Shostakovich’s Opera about football at a high end cultural stadium, both Great!