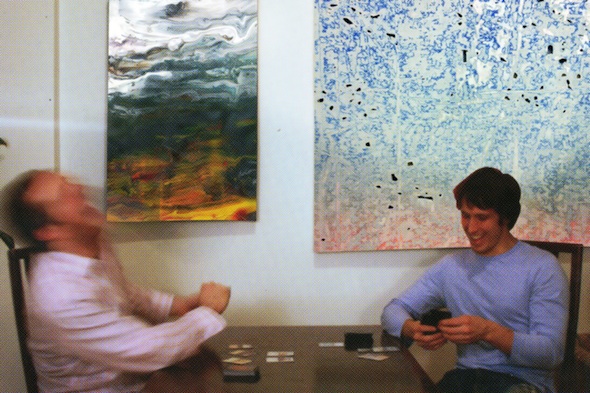 The title of the show is a reference to Sam Raimi’s horror film of the same name, a remake of his first attempt as opposed to a continuation of the story. Allowing oneself to reassess and reattempt what we have labeled as concluded, can results in something far more interesting then the initial work.

Kadar Brock first began scraping away the marks from paintings to interrogate the inherent expressiveness of mark making – “trying to scrape away as much as possible and see how much of it would still stick”. In his scraping and sanding, he discovered something more interesting, and it became another ritual all together. Kadar’s whited out and stripped back canvases are beautiful contemplations of the art making process – flecks of colour and pattern, depth and intrigue. Like the peeling layers of wallpaper in an old building, the works reveal unknown histories and imagined realities.

Matt Jones’ first Energy Painting was made in jest, to pick on a fellow art student. Years later, looking back through old works, Matt realised that there was something in the piece worth exploring.
The Energy Paintings are a balance between carelessness and containment, preparation and extraneous elements. Large blotches of color explode on the surface, receding into the black depths of the canvas, but looking closely, delicate fractal patterns are hidden amongst the density – drawing attention to the alchemy within the materials but also to the life that occurs outside of the artists control, but not against his will. An annihilation of self and inclusion in something greater.

Evil Dead 2 is the sequel before the event, a reassessment before the initial vote. Paintings that started of as jokes or investigations, revealed as conclusive works.