One of the nicest things about talking to Kirstine Roepstorff is the pleasure she clearly takes in making her work and talking about her process. She is unpretentious and generous with her time although the studio is clearly busy. Kirstine’s collages are messy and intuitive, yet carefully considered – she explains that as her practice has developed into a professional career it was very important to her to keep things “raw”. 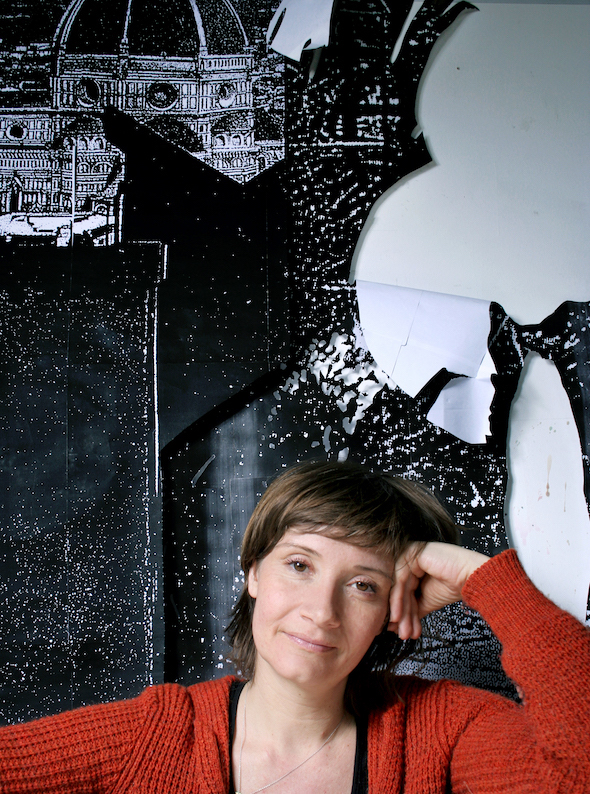 Rawness comes with the territory of collage – and is one of the elements that first attracted Kirstine to the medium. A jumble of ‘trashy’ materials reconstructed into an idea. She enjoyed taking items of little value and adding to them – and the fact that this allowed for mistakes without too much pressure. She is careful not to allow herself to use one technique for too long either, not to let the work become to slick or rehearsed.

Her studio in Kreuzberg is large and spacious, although, she says, it could be double the size and no room would go to waste. It is an organised workspace, with hundreds of neatly folded textiles, treasures boxed and labeled, magazines tagged and categorised.

The objects Kirstine uses in her collages: fabrics, photocopies, cuttings, glitter, foil and other bits and pieces are, as she describes “lighter toward their own existence” then say, paint. The materials lend an indifference to their rearrangement and re-contextualisation by their very nature – each element existed in another life before they were put together. 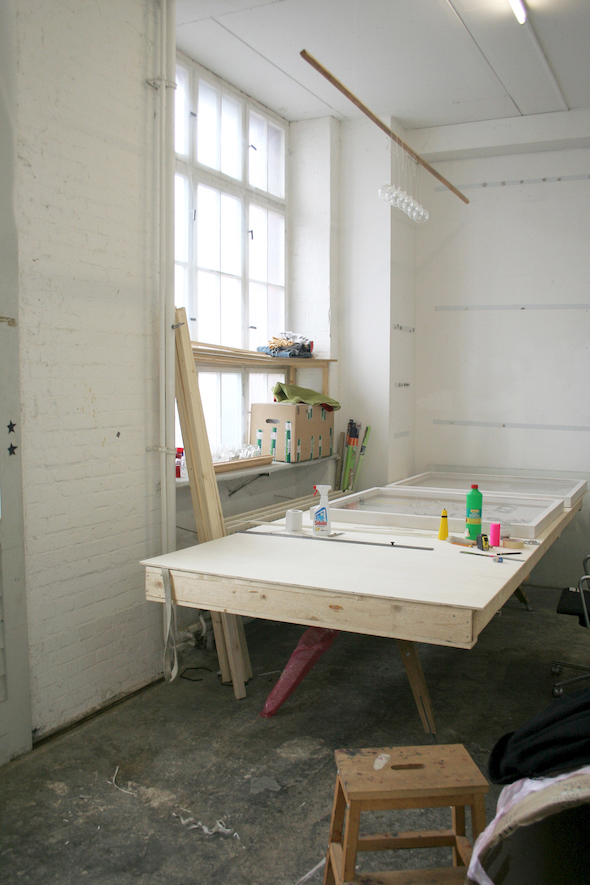 In her earlier work, the motivation for making came out of a certain anger at the world, especially at news providers and their power to manufacture or limit truth – collage was the perfect tool for Kirstine to remodel the reality given to her by the media, and give her interpretation of events. 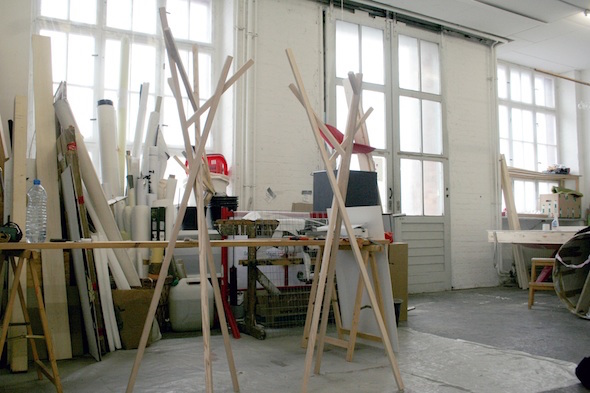 Some of these earlier collages are currently on show at the Gesamptkunstwerk: New Art from Germany exhibition at Saachi Gallery in London. One example, Hidden Truth (2002), depicts an epic utopian landscape of spectacle and excess, littered with objects of globalisation and capitalism. Hotels balance on impossible cliff edges and nestle among the branches of treetops to get an uninterrupted view of a flawless landscape – the perfect holiday destination? This ridiculous play on middle-class aspiration is showered by an array of planets that seem closely within reach – perhaps the next stop?

There is an attentiveness to space and light in Roepstorff’s works, careful selections of what is removed from an image, what is cut away and what is left behind, shadows cast by the various delicately cut objects are as important as the objects themselves – the considered removal of the blacks or whites in a photocopy direct our attention to the space in between.

Another work in the Saatchi show, All possible Experiences (2006), is incredibly dense with lines, shapes, images and shadows, yet simultaneously sparse in relation to it’s title. The action and dynamism exploding from the canvas – thousands of tiny pieces of fabric and paper that make up the collage – insist that the viewer step back to view it. The further back one stands, however, the less detail one can see. Closer up, one loses perspective of the whole. A beautiful analogy of our desire for knowledge. 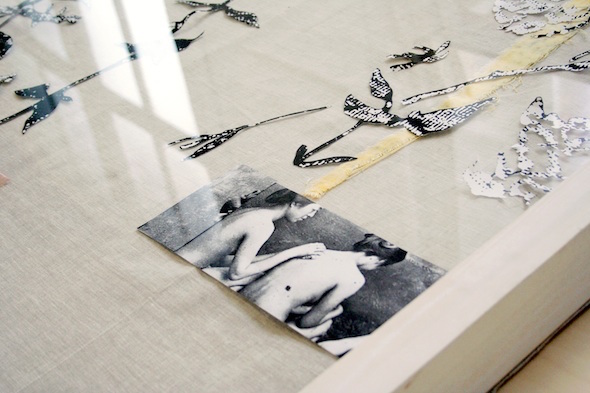 Kirstine’s recent works have evolved into investigations of space and relationships – no longer so angry, although still very much influenced by what is happening in the world and in her own life. She reflects that in growing as an artist, her works have become less about the surface and more about depth and density.

While the image was once the focus, now far more important is the space around the image – this is where all of the interesting things occur, this is where form disappears and becomes ideas. Space is magnificent in that it can exist without objects, without image, she explains – image, while holding itself to greater importance, is entirely dependent on the space that envelopes it. 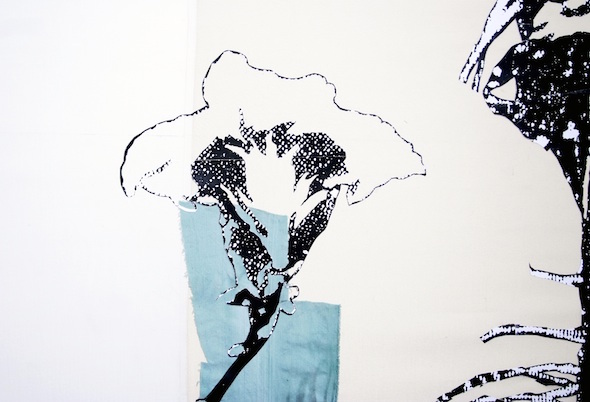 In last year’s exhibition, Dried Dew Drops – Wunderkammer of Formlessness, Kirstine curated, or collaged, an exhibit of artefacts exploring the history of time and space – of formlessness – and our intrinsic connection to it – through form. She was given permission to gather a collections of objects she found important to her work from Basel’s amazing museum collections (an experience she describes as “so much fun!”), then organize them into a walk-through exhibit spanning six rooms.

With access to some of art history’s most interesting objects and artifacts, it was an opportunity one can only dream about – bringing together over 1000 historical objects to tell a story about the space between things. “Form is just a representative, really, of formlessness, and for the process for creativity…it all comes from a sort of sensibility that is shapeless.” 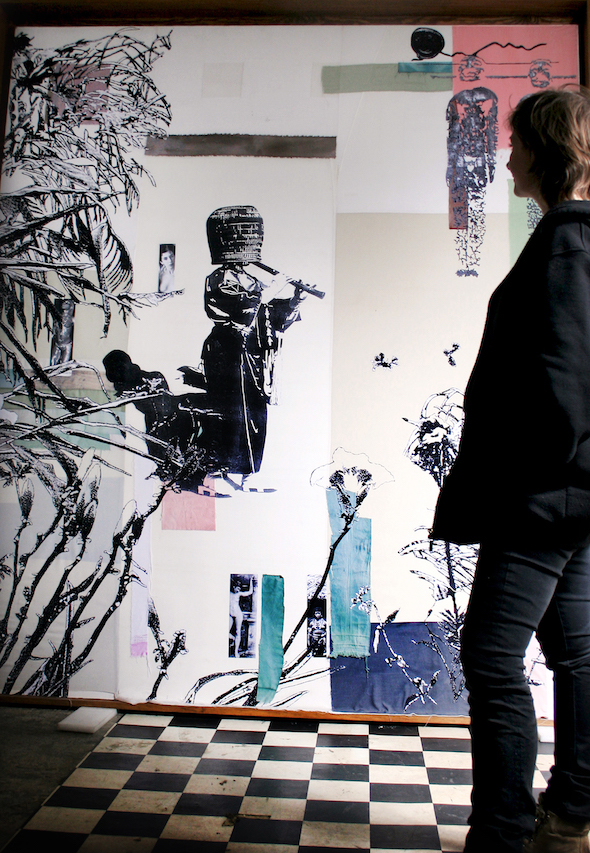 Each room navigated through what Kirstine saw as the development of our relationship to form – beginning with rudimentary objects, discovering them and learning to navigate them through space. The following rooms investigated acknowledging our relationship to form and in turn to ourselves – and our own fragility. The final rooms culminated with our feeble and noble attempts to understand this relationship, and finally silence – thought.

The role of the artist or the maker, is to turn formlessness into form so that it can be read – the interesting thing about what happens when this form is experienced, is that it immediately returns to formlessness – to contemplation.


In association with the Saatchi Gallery London, BAL will be visiting the studios of Berlin-based artists whose work is included in the Saatchi Gallery’s current exhibition, Gesamtkunstwerk: New Art from Germany, a survey of 24 artists who together confirm Germany’s position as a powerhouse of contemporary art.