The BMW-sponsored Guggenheim „urban research“ lab found the Wrangelkiez area in Kreuzberg a little too hot for its liking. Citing police warnings regarding possible attacks with “Farbbeutel” (paint-filled bags) and rotten eggs, the mobile building skulked off to find another, less lefty-anarchist sodden area.

In its own words “a mobile laboratory travelling around the world to inspire innovative ideas for urban life” the project had planned a six-week stop in Berlin, from May to June 2012. Here it wanted to explore the topic of “Confronting Comfort” which apparently translates to comfort and the urgent need for social and environmental responsibility, something which BMW is known for. It planned to hold a series of lectures and discussion groups with residents, architects and artists. 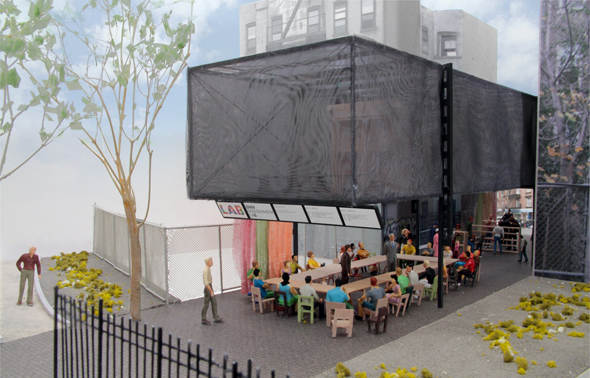 The original spot for the project’s location was the last piece of waste ground on Kastanienallee, then it was going to be Pfefferberg, but then Mitte isn’t really that confrontational these days, so the waste ground between Cuvrystr. and Schlesische Str. was decided on, the one next to Artitude/SRS. An uncontroversial choice in the Wrangelkiez area where rents have increased by 20% last year, and about half the locals had to leave. One wonders whether anyone from the BMW Lab bothered Googling “Berlin” “Urban problems” or “gentrification” or the like before settling on this spot.

Despina Stokou‘s blog piece here details the meeting at which Lutz Henke of Artitude tried to explain the purpose of the Lab to a room full of displeased Kreuzbergers last Monday. She notes that 90% of the audience was German, yet the power-point presentation had titles such as Beyond Segrification: Models for Equal Glocalization, FeedForward 2: Co-opting Place etc. I’m not even sure what these mean in English, to be honest. The meeting collapsed into what sounds like chaos (stage invasions, accusations of producing “Kunstkacke”).

Since the announcement of the Lab’s retreat, various political fractions have been trading insults across the pages of the local press, mainly attacking the Kreuzbergers (or lefties, or anarchists, or… take your pick) for their “provincialism” and “parochialism” for not wanting such an edgy project in the midst of their Kiez. 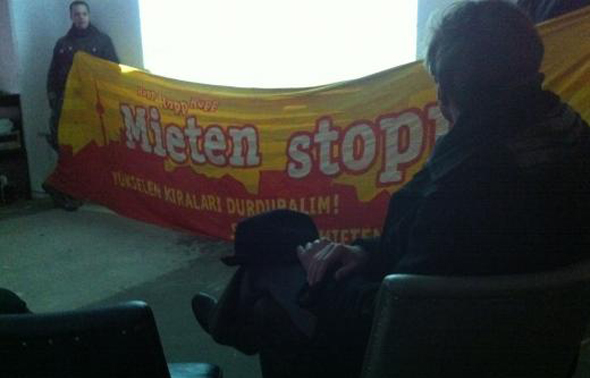 The Tagesspiegel even trotted out the artist Rirkrit Tiravanija, who works for the BMW Lab in some sort of networking/creative function, to prove to Kreuzberg how lame it was compared to say, bits of Manhattan. He also trotted out some platitudes about corporate sponsorship now being the norm for many cultural projects – this is fair enough, but must it be so blatant, with the BMW name everywhere? And is it a good thing? These are vital questions.

BMW’s head of marketing is on record saying that projects like this serve to establish the carmaker’s name in the minds of an audience who don’t usually read auto magazines, or are interested in cars. Given the gap between the Lab’s intention and the corporate aim one wonders how far the sponsor actually underwrites the purpose of the project.

If the Lab really wanted to engage with urban problems, and not just provide yet another venue for the art crowd of various stripes to drink cheap wine in, they should really confront comfort and look beyond the established spaces. But hey, no-one’s going to Marzahn, are they?