Alexandra (Alex) Tennigkeit has worked steadily for years around themes of German nationhood, religious politics, and personal tales of death and heartbreaking dismay. Her primary means of symbolizing this largely pop morte iconography were through painted and sculpted assemblages of hardcore rap slogans, over-objectified femmes, and anything and everything skeletal. In the last year or so she’s largely dropped the oversexed femme theme and the musicality of hardcore rap in favor of a body of symbolic portraits featuring herself and her friends. 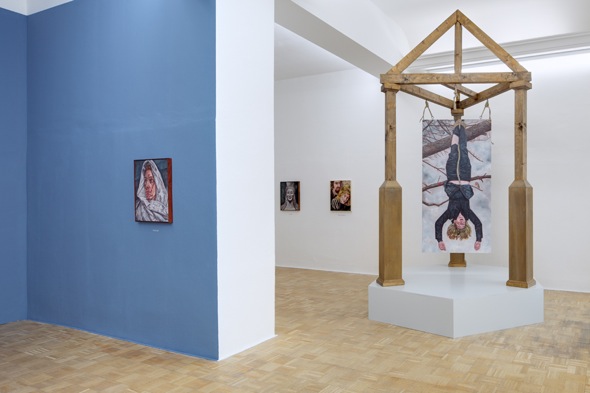 A Hint of Lightness, the title of Alex Tennigkeit’s current show at Jette Rudolph, is swamped by self-aggrandizing personal allegory. Lady FN GA and A Hint of Lightness are two of the strongest works that speak to this trajectory in a largely autobiographical show. In the case of the latter, Alex’s deceased father reaches through time (judging from the patterned décor, it appears to be the late 1960’s) by resting a skeleton hand on her bereft shoulder. Standing just in front of him and to his left, Alex faces the viewer with her glance askew and a clown painted mouth, her rosy skin contrasts the hollow and blank look in her bright green eyes. The painting offers a romantic system of support; it runs up against the “art is not therapy” argument but is not besieged by it. Tennigkeit does not seem intent to resolve her feelings in paint, but instead, as I see it, exerts her efforts in a coolly autobiographical way while accidentally expressing premature loss. It is clear from the work that what is missing between her and her father is un-fixable, but nonetheless support reaches her like a completely personal, specific, and time-shifting Hallmark card, i.e., her father is thinking of her (in the Hallmark sense), but nothing more is proven. 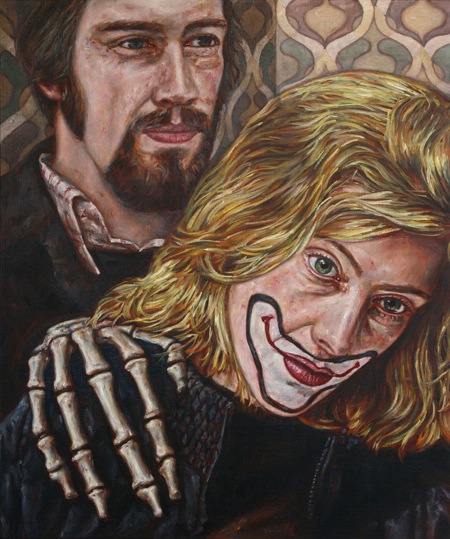 In Lady FN GA, Alex is depicted in the driver’s seat of her car with yet another skeleton cloy; however, in this case, there is a more rambunctious usage. Her face is painted a bony white and her full costume reads like that of an angsty teenager on Halloween, prepared to enjoy a little mayhem. Yet with her hand on the wheel and her butt in the driver’s seat, she is wittingly responsible for her life. She may initiate and decide the course but there aren’t any others passengers in the car–she is alone in her responsibility as many ambitious young adults are. It might be a little lonesome but that is the trade-off for being the author of this successful comic-tragic narrative. 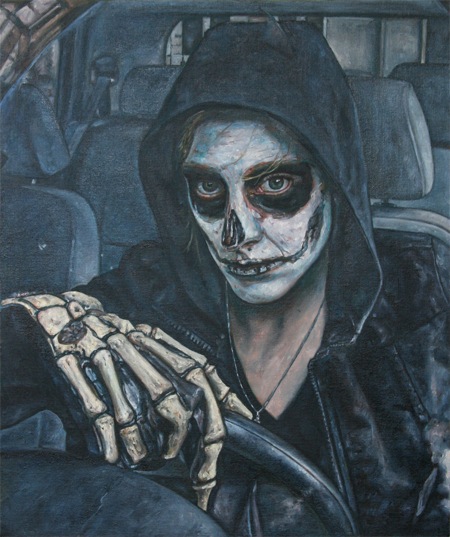 Overall I am glad to see less self-objectification here than in her previous bodies of work (she is a pretty blonde with an easily exploitable figure); she doesn’t sell that here, nor does she seem as focused on presenting herself as a rebel. One might miss Tennigkeit’s genuine lust for hardcore rap(!), but I for one appreciate when she retains its gift of orality (via her autobiographical narratives), while dropping any extra effort to fully wear the culture. She seems to have grown more austere, softer, but still carries a lagging desire for macho bravado as exhibited by the size of her largest (perhaps cannibalistic?) work at 200cm x 180cm, in which she’s depicted as an avaricious flesh-eater. She’s tough but softening and in a private way this is a revolution. 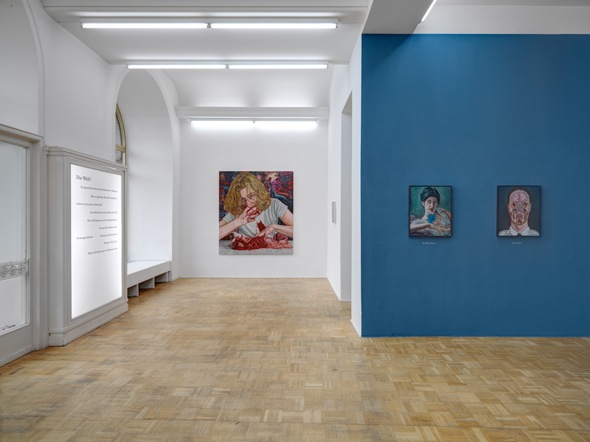