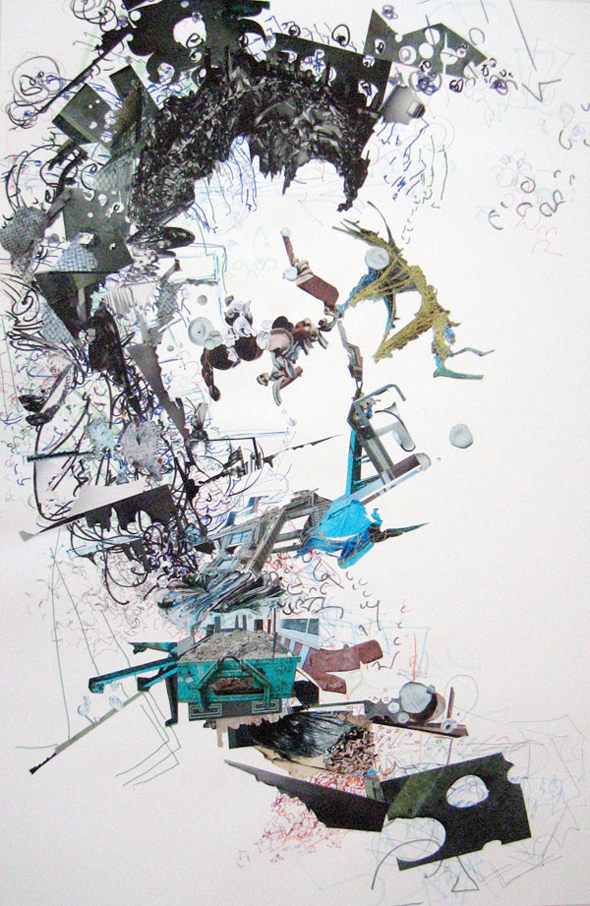 USA born artist Madeline Stillwell exhibits a series of sketches and collages as well as a three dimensional model made out of detritus. Scraps of paper and traces of graphite compose strange machines, and imaginary worlds. Stillwell provides us with a very specific look on our own world or a depiction of a post-apocalyptic one. Either way the viewer can take up the playful task of putting the pieces together and imagining the storyline between their own here and now, and Stillwell’s perception of reality.

Florian Japp (b. 1972, Zurich) presents a series of installations using a combination of ready-mades and crafted materials. His objects, sleek and aesthetical, bring to mind designer utilitarian objects, although it is clear that they have no intention of fulfilling such a purpose. Japp uses coloured elements carefully and plays with forms and materials in a manner that is typical of his work. He skillfully combines iron with silk and granite with volleyballs, creating a paradox universe where gym equipment and sports gear are not to be used. 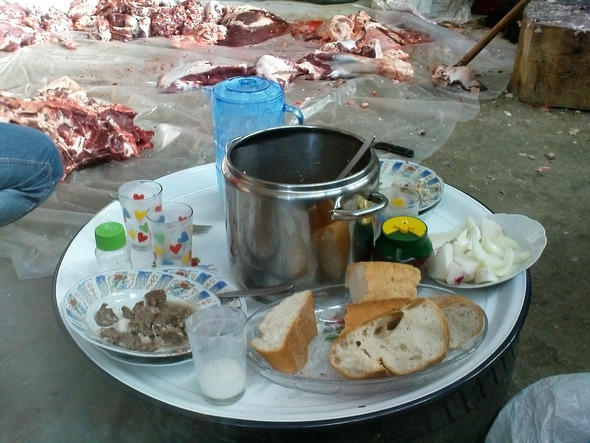 Between visual anthropology and provocation, Peter Truschner presents a collection of pictures taken in several countries depicting everyday life and traditions of different cultures. His images (from his projects “Schlachten”, “The Big Sleep” and “Ennui”), taken between 2010 and 2012, focus on the decadent conditions of living, customs and traditions, and the way different people go through life. The Austrian writer (b. 1967, Klagenfurt) uses vividly coloured photographs in a series of violent and raw images of slaughtered goats and disembodied animal parts, juxtaposed with bored and apathetic people.

While there is no apparent connection between the three bodies of work created by Stillwell, Japp, and Truschner, the title “Details” is vague and wide enough to allow the viewer to create connections. The works don’t seem to connect or interact with each other in terms of themes, style nor media, but then again there’s nothing wrong with interpreting each of the works on its’ own right.